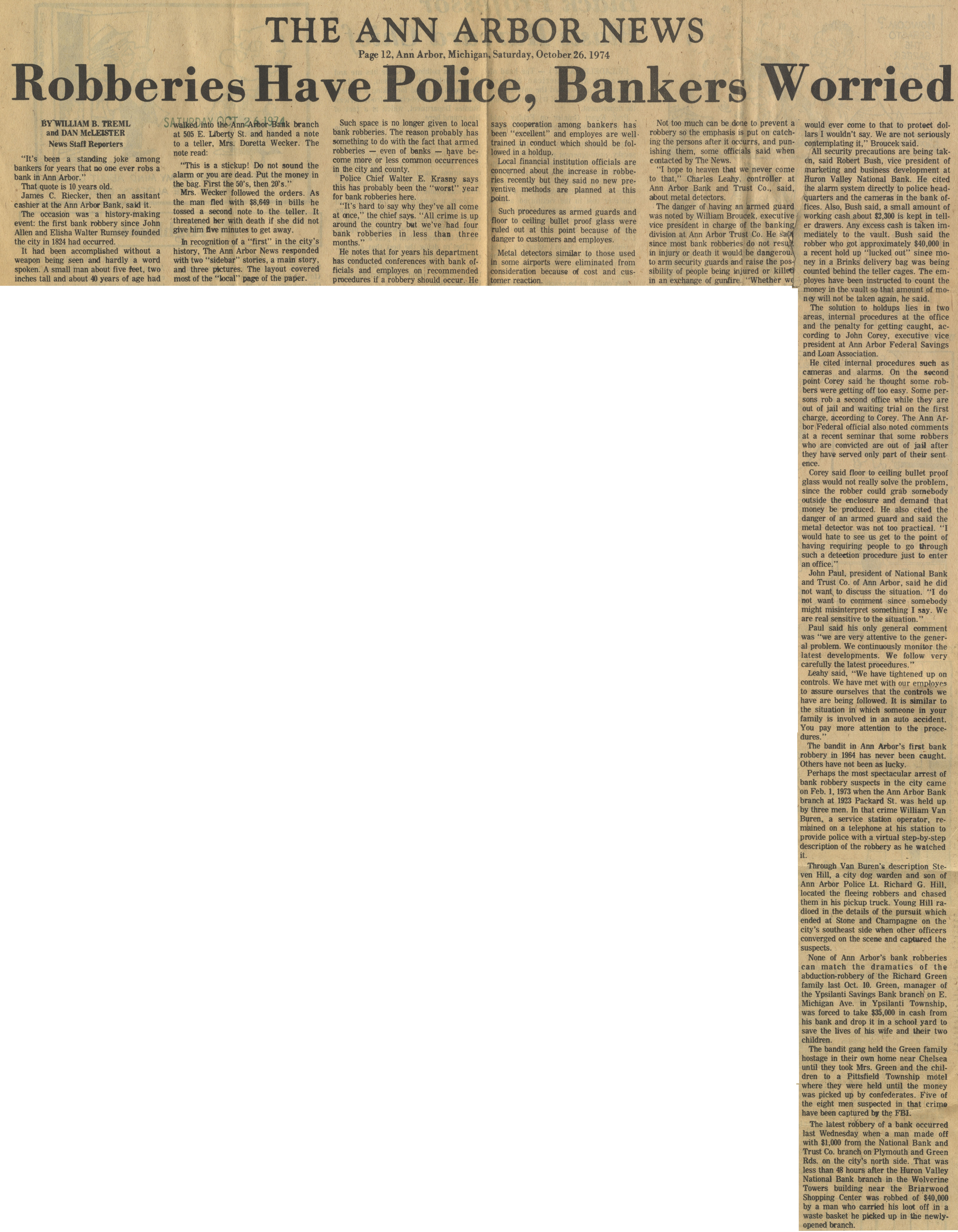 BY WILLIAM B. TREML and DAN McLElSTER

“It’s been a standing joke among bankers for years that no one ever robs a bank in Ann Arbor."

That quote is 10 years old.

James C. Riecker, then an assitant cashier at the Ann Arbor Bank, said it.

The occasion was a history-making event: the first bank robbery since John Allen and Elisha Walter Rumsey founded the city in 1824 had occurred.

It had been accomplished without a weapon being seen and hardly a word spoken. A small man about five feet, two inches tall and about 40 years of age had

walked into the Ann Arbor Bank branch at 505 E. Liberty St. and handed a note to a teller, Mrs. Doretta Wecker. The note read:

Mrs. Wecker followed the orders. As the man fled with $8,649 in bills he tossed a second note to the teller. It threatened her with death if she did not give him five minutes to get away.

In recognition of a “first” in the city’s history, The Ann Arbor News responded with two “sidebar” stories, a main story, and three pictures. The layout covered most of the “local" page of the paper.

Such space is no longer given to local bank robberies. The reason probably has something to do with the fact that armed robberies — even of banks — have become more or less common occurrences in the city and county.

“It’s hard to say why they've all come at once,” the chief says. “All crime is up around the country but we’ve had four bank robberies in less than three months.”

He notes that for years his department has conducted conferences with bank officials and employes on recommended procedures if a robbery should occur. He

says cooperation among bankers has been “excellent” and employes are well-trained in conduct which should be followed in a holdup.

Local financial institution officials are concerned about the increase in robberies recently but they said no new preventive methods are planned at this point.

Such procedures as armed guards and floor to ceiling bullet proof glass were ruled out at this point because of the danger to customers and employes.

Metal detectors similar to those used in some airports were eliminated from consideration because of cost and customer reaction.

Not too much can be done to prevent a robbery so the emphasis is put on catching the persons after it occurrs, and punishing them, some officials said when contacted by The News.

“I hope to heaven that we never come to that,” Charles Leahy, controller at Ann Arbor Bank and Trust Co., said, about metal detectors.

The danger of having an armed guard was noted by William Broucek, executive vice president in charge of the banking division at Ann Arbor Trust Co. He said since most bank robberies do not result in injury or death it would be dangerous to arm security guards and raise the possibility of people being injured or killed in an exchange of gunfire. "Whether we

would ever come to that to protect dollars I wouldn’t say. We are not seriously contemplating it,” Broucek said.

All security precautions are being taken, said Robert Bush, vice president of marketing and business development at Huron Valley National Bank. He cited the alarm system directly to police headquarters and the cameras in the bank offices. Also, Bush said, a small amount of working cash about $2,300 is kept in teller drawers. Any excess cash is taken immediately to the vault. Bush said the robber who got approximately $40,000 in a recent hold up “lucked out” since money in a Brinks delivery bag was being counted behind the teller cages. The employes have been instructed to count the money in the vault so that amount of money will not be taken again, he said.

The solution to holdups lies in two areas, internal procedures at the office and the penalty for getting caught, according to John Corey, executive vice president at Ann Arbor Federal Savings and Loan Association.

He cited internal procedures such as cameras and alarms. On the second point Corey said he thought some robbers were getting off too easy. Some persons rob a second office while they are out of jail and waiting trial on the first charge, according to Corey. The Ann Arbor Federal official also noted comments at a recent seminar that some robbers who are convicted are out of jail after they have served only part of their sentence.

Corey said floor to ceiling bullet proof glass would not really solve the problem, since the robber could grab somebody outside the enclosure and demand that money be produced. He also cited the danger of an armed guard and said the metal detector was not too practical. “I would hate to see us get to the point of having requiring people to go through such a detection procedure just to enter an office.”

John Paul, president of National Bank and Trust Co. of Ann Arbor, said he did not want, to discuss the situation. “I do not want to comment since somebody might misinterpret something I say. We are real sensitive to the situation."

Paul said his only general comment was “we are very attentive to the general problem. We continuously monitor the latest developments. We follow very carefully the latest procedures.”

Leahy said, “We have tightened up on controls. We have met with our employes to assure ourselves that the controls we have are being followed. It is similar to the situation in which someone in your family is involved in an auto accident. You pay more attention to the procedures.”

The bandit in Ann Arbor’s first bank robbery in 1964 has never been caught. Others have not been as lucky.

Perhaps the most spectacular arrest of bank robbery suspects in the city came on Feb. 1, 1973 when the Ann Arbor Bank branch at 1923 Packard St. was held up by three men. In that crime William Van Buren, a service station operator, remained on a telephone at his station to provide police with a virtual step-by-step description of the robbery as he watched it.

Through Van Buren’s description Steven Hill, a city dog warden and son of Ann Arbor Police Lt. Richard G. Hill, located the fleeing robbers and chased them in his pickup truck. Young Hill radioed in the details of the pursuit which ended at Stone and Champagne on the city’s southeast side when other officers converged on the scene and captured the suspects.

None of Ann Arbor’s bank robberies can match the dramatics of the abduction-robbery of the Richard Green family last Oct. 10. Green, manager of the Ypsilanti Savings Bank branch on E. Michigan Ave. in Ypsilanti Township, was forced to take $35,000 in cash from his bank and drop it in a school yard to save the lives of his wife and their two children.

The bandit gang held the Green family hostage in their own home near Chelsea until they took Mrs. Green and the children to a Pittsfield Township motel where they were held until the money was picked up by confederates. Five of the eight men suspected in that crime have been captured by the FBI.

The latest robbery of a bank occurred last Wednesday when a man made off with $1,000 from the National Bank and Trust Co. branch on Plymouth and Green Rds. on the city’s north side. That was less than 48 hours after the Huron Valley National Bank branch in the Wolverine Towers building near the Briarwood Shopping Center was robbed of $40,000 by a man who carried his loot off in a waste basket he picked up in the newly-opened branch.