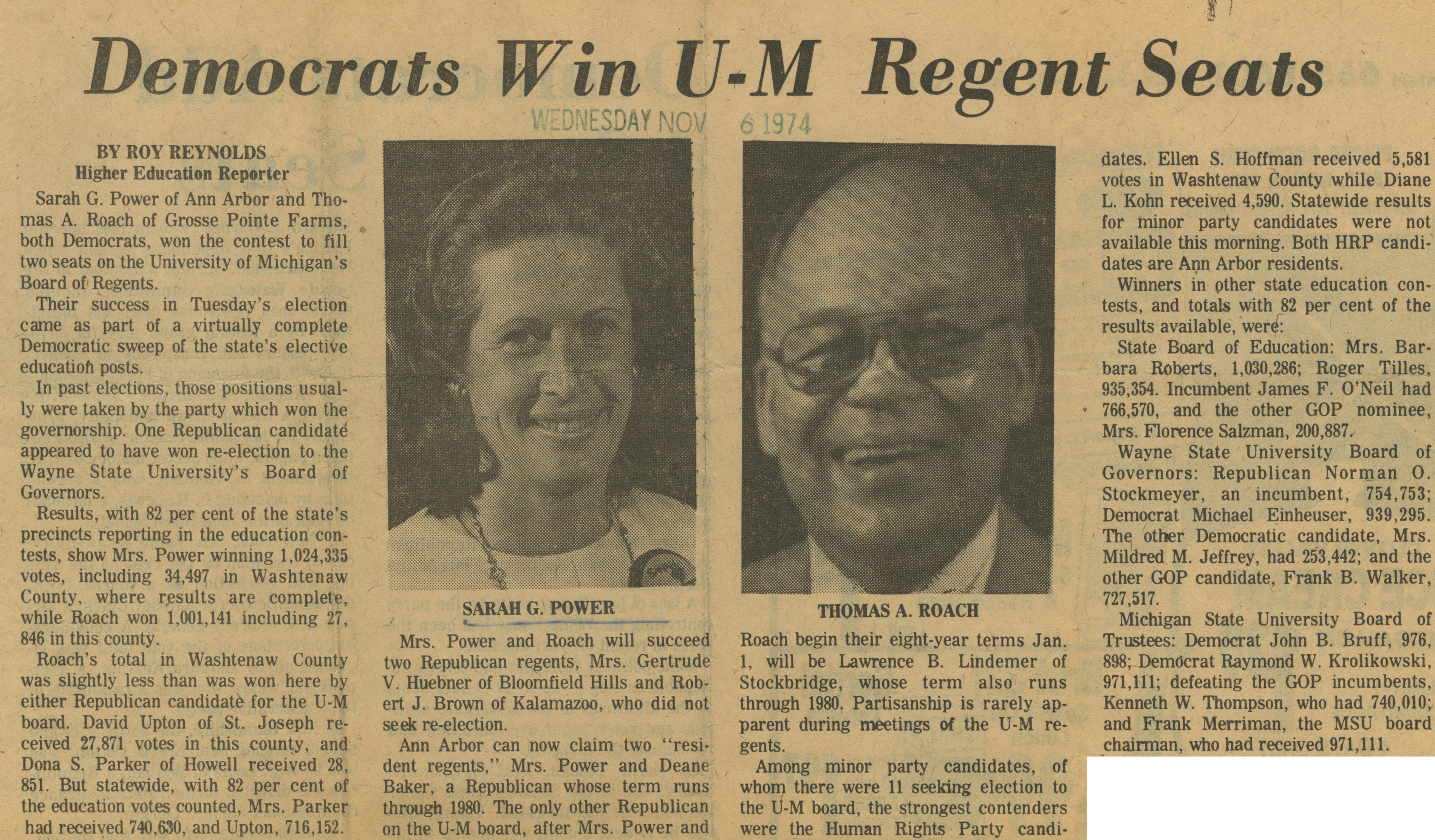 Sarah G. Power of Ann Arbor and ThoI mas A. Roach of Grosse Pointe Farms, I both Democrats, won the contest to fill I two seats on the University of Michigan's I Board of Regents. Their success in Tuesday's election I carne as part of a virtually complete I Democratie sweep of the state's elective I education posts. In past elections, those positions usualI ly were taken by the party which won the I governorship. One Republican candidate I appeared to have won re-election to the I Wayne State University's Board of I Governors. Results, with 82 per cent of the state's I precincts reporting in the education conI tests, show Mrs. Power winning 1,024,335 I votes, including 34,497 in Washtenaw I County, where results are complete, I while Roach won 1,001,141 including 27, I' 846 in this county. Roach's total in Washtenaw County I was slightly less than was won here by I either Republican candidate for the U-M I board. David Upton of St. Joseph reI ceived 27,871 votes in this county, and I Dona S. Parker of Howell received 28, I 851. But statewide, with 82 per cent of I the education votes counted, Mrs. Parker I had received 740,630, and Upton, 716,15JL_ Mrs. Power and Roach will succeed I two Republican regents, Mrs. Gertrude I V. Huebner of Bloomfield Hills and RobI ert J. Brown of Kalamazoo, who did not I seek re-election. Ann Arbor can now claim two "resiI dent regents," Mrs. Power and Deane I Baker, a Republican whose term runs I through 1980. The only other Republican I on the U-M board, after Mrs. Power and Roach begin their eight-year terms Jan. 1, will be Lawrence B. Lindemer of sWckbridge, whose term also runs through 1980. Partisanship is rarely apparent during meetings of the U-M regents. Among minor party candidates, ot whom there were 11 seeking election to the U-M board, the strongést contenders were ttajluman_jlightsjrty candidatos. ElïenTHoffrnarTieceived 5,581 votes in Washtenaw County while Diane L Kohn röceived 4,590. Statewide results for minor party candidates were not available this morning. Both HRP candidates are Ann Arbor residents. Winners in other state education contests, and totals with 82 per cent of the results available, were: State Board of Education: Mrs. Barh,v. Roberts lMy8iijgerTgs. 935,354. Incumbent James F. O'Neil had 1 766,570, and the other GOP nominee, I Mrs. Florence Salzman, 200,887. Wayne State University Board of I Governors: Republican Norman O. I Stockmeyer, an incumbent, 754,753; I Democrat Michael Einheuser, 939,295. I The other Democratie candidate, Mrs. I Mildred M. Jeffrey, had 253,442; and the I other GOP candidate, Frank B. Walker, I 727,517. I Michigan State University Board of I Trustees: Democrat John B. Bruff, 976, I 898; Democrat Raymond W. Krolikowski, I 971,111; defeating the GOP incumbents, I Kenneth W. Thompson, who had 740,010; I and Frank Merriman, the MSU board I chairman. who had receivedJlLllL- J