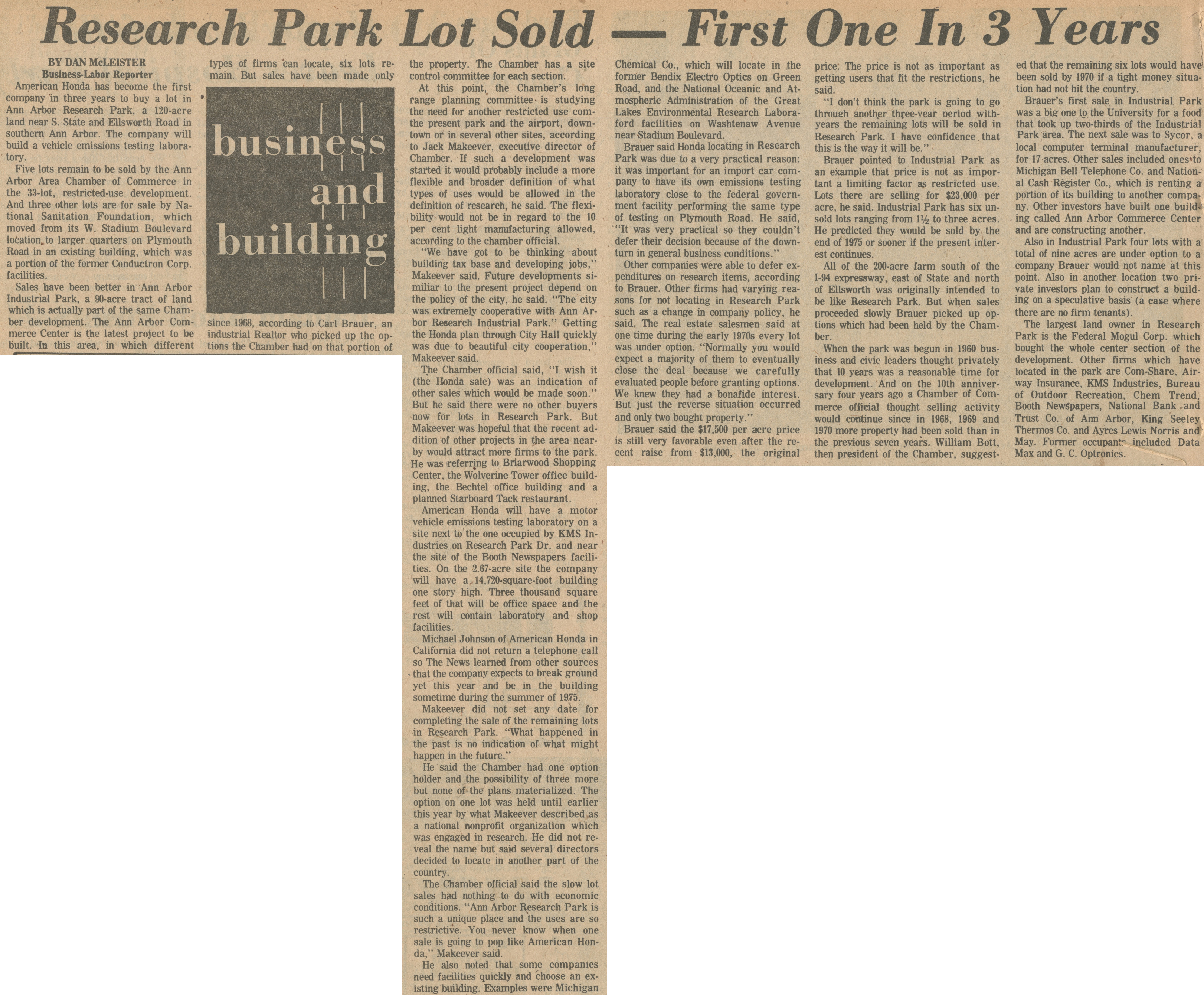 American Honda has become the first company in three years to buy a lot in Ann Arbor Research Park, a 120-acre land near S. State and Ellsworth Road in southern Ann Arbor. The company will build a vehicle emissions testing laboratory.

Five lots remain to be sold by the Ann Arbor Area Chamber of Commerce in the 33-lot, restricted-use development. And three other lots are for sale by National Sanitation Foundation, which moved from its W. Stadium Boulevard location to larger quarters on Plymouth Road in an existing building, which was a portion of the former Conductron Corp. facilities.

Sales have been better in Ann Arbor Industrial Park, a 90-acre tract of land which is actually part of the same Chamber development. The Ann Arbor Commerce Center is the latest project to be built. In this area, in which different types of firms can locate, six lots remain. But sales have been made only since 1968, according to Carl Brauer, an industrial Realtor who picked up the options the Chamber had on that portion of the property. The Chamber has a site control committee for each section.

At this point, the Chamber’s long range planning committee is studying the need for another restricted use com-the present park and the airport, downtown or in several other sites, according to Jack Makeever, executive director of Chamber. If such a development was started it would probably include a more flexible and broader definition of what types of uses would be allowed in the definition of research, he said. The flexibility would not be in regard to the 10 per cent light manufacturing allowed, according to the chamber official.

“We have got to be thinking about building tax base and developing jobs,’’ Makeever said. Future developments similiar to the present project depend on the policy of the city, he said. “The city was extremely cooperative with Ann Arbor Research Industrial Park." Getting the Honda plan through City Hall quickly was due to beautiful city cooperation," Makeever said.

The Chamber official said, “I wish it (the Honda sale) was an indication of other sales which would be made soon." But he said there were no other buyers now for lots in Research Park. But Makeever was hopeful that the recent addition of other projects in the area nearby would attract more firms to the park. He was referring to Briarwood Shopping Center, the Wolverine Tower office building, the Bechtel office building and a planned Starboard Tack restaurant.

American Honda will have a motor vehicle emissions testing laboratory on a site next to the one occupied by KMS Industries on Research Park Dr. and near the site of the Booth Newspapers facilities. On the 2.67-acre site the company will have a 14,729-square-foot building one story high. Three thousand square feet of that will be office space and the rest will contain laboratory and shop facilities.

Michael Johnson of American Honda in California did not return a telephone call so The News learned from other sources that the company expects to break ground yet this year and be in the building sometime during the summer of 1975.

Makeever did not set any date for completing the sale of the remaining lots in Research Park. “What happened in the past is no indication of what might happen in the future.”

He said the Chamber had one option holder and the possibility of three more but none of the plans materialized. The option on one lot was held until earlier this year by what Makeever described as a national nonprofit organization which was engaged in research. He did not reveal the name but said several directors decided to locate in another part of the country.

The Chamber official said the slow lot sales had nothing to do with economic conditions. “Ann Arbor Research Park is such a unique place and the uses are so restrictive. You never know when one sale is going to pop like American Honda," Makeever said.

He also noted that some companies need facilities quickly and choose an existing building. Examples were Michigan Chemical Co., which will locate in the former Bendix Electro Optics on Green Road, and the National Oceanic and Atmospheric Administration of the Great Lakes Environmental Research Laboraford facilities on Washtenaw Avenue near Stadium Boulevard.

Brauer said Honda locating in Research Park was due to a very practical reason: it was important for an import car company to have its own emissions testing laboratory close to the federal government facility performing the same type of testing on Plymouth Road. He said, “It was very practical so they couldn't defer their decision because of the downturn in general business conditions.” Other companies were able to defer expenditures on research items, according to Brauer. Other firms had varying reasons for not locating in Research Park such as a change in company policy, he said. The real estate salesmen said at one time during the early 1970s every lot was under option. “Normally you would expect a majority of them to eventually close the deal because we carefully evaluated people before granting options. We knew they had a bonafide interest. But just the reverse situation occurred and only two bought property.”

Brauer said the $17,500 per acre price is still very favorable even after the recent raise from $13,000, the original price. The price is not as important as getting users that fit the restrictions, he said.

“I don’t think the park is going to go through another three-year period with-years the remaining lots will be sold in Research Park. I have confidence that this is the way it will be."

Brauer pointed to Industrial Park as an example that price is not as important a limiting factor as restricted use. Lots there are selling for $23,000 per acre, he said. Industrial Park has six unsold lots ranging from 1½ to three acres. He predicted they would be sold by the end of 1975 or sooner if the present interest continues.

All of the 200-acre farm south of the 1-94 expressway, east of State and north of Ellsworth was originally intended to be like Research Park. But when sales proceeded slowly Brauer picked up options which had been held by the Chamber.

When the park was begun in 1960 business and civic leaders thought privately that 10 years was a reasonable time for development. And on the 10th anniversary four years ago a Chamber of Commerce official thought selling activity would continue since in 1968, 1969 and 1970 more property had been sold than in the previous seven years. William Bott, then president of the Chamber, suggested that the remaining six lots would have been sold by 1970 if a tight money situation had not hit the country.

Brauer’s first sale in Industrial Park was a big one to the University for a food that took up two-thirds of the Industrial Park area. The next sale was to Sycor, a local computer terminal manufacturer, for 17 acres. Other sales included ones to Michigan Bell Telephone Co. and National Cash Register Co., which is renting a portion of its building to another company. Other investors have built one building called Ann Arbor Commerce Center and are constructing another.

Also in Industrial Park four lots with a total of nine acres are under option to a company Brauer would not name at this point. Also in another location two private investors plan to construct a building on a speculative basis (a case where there are no firm tenants).

The largest land owner in Research Park is the Federal Mogul Corp. which bought the whole center section of the development. Other firms which have located in the park are Com-Share, Airway Insurance, KMS Industries, Bureau of Outdoor Recreation, Chem Trend, Booth Newspapers, National Bank and Trust Co. of Ann Arbor, King Seeley Thermos Co. and Ayres Lewis Norris and May. Former occupants included Data Max and G. C. Optronics.