Depression: Memories Are Still Vivid For Some Local Residents 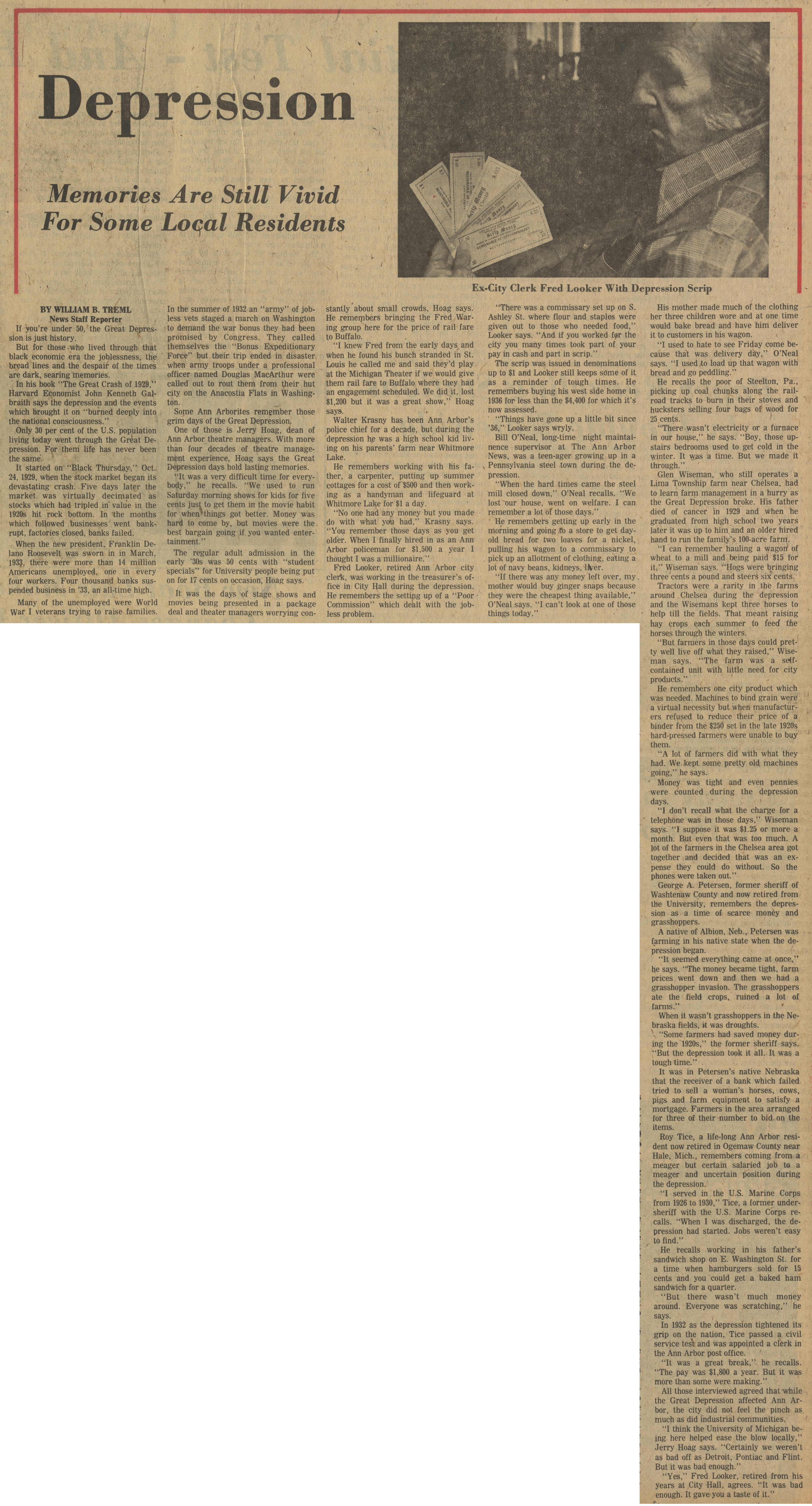 Memories Are Still Vivid For Some Local Residents

BY WILLIAM B. TREML

If you're under 50, the Great Depression is just history.

But for those who lived through that black economic era the joblessness, the bread lines and the despair of the times are dark, searing memories.

In his book “The Great Crash of 1929,” Harvard Economist John Kenneth Galbraith says the depression and the events which brought it on "burned deeply into the national consciousness."

Only 30 per cent of the U.S. population living today went through the Great Depression. For them life has never been the same.

It started on "Black Thursday,” Oct. 24, 1929, when the stock market began its devastating crash. Five days later the market was virtually decimated as stocks which had tripled in value in the 1920s hit rock bottom. In the months which followed businesses went bankrupt, factories closed, banks failed.

When the new president. Franklin Delano Roosevelt was sworn in in March, 1933, there were more than 14 million Americans unemployed, one in every four workers. Four thousand banks suspended business in '33, an all-time high.

Many of the unemployed were World War I veterans trying to raise families. In the summer of 1932 an "army” of jobless vets staged a march on Washington to demand the war bonus they had been promised by Congress. They called themselves the "Bonus Expeditionary Force” but their trip ended in disaster, when army troops under a professional officer named Douglas MacArthur were called out to rout them from their hut city on the Anacostia Flats in Washington.

Some Ann Arborites remember those grim days of the Great Depression.

One of those is Jerry Hoag, dean of Ann Arbor theatre managers. With more than four decades of theatre management experience. Hoag says the Great Depression days hold lasting memories.

"It was a very difficult time for everybody." he recalls. "We used to run Saturday morning shows for kids for five cents just to get them in the movie habit for when things got better. Money was hard to come by, but movies were the best bargain going if you wanted entertainment."

The regular adult admission in the early 30s was 50 cents with "student specials” for University people being put on for 17 cents on occasion, Hoag says.

It was the days of stage shows and movies being presented in a package deal and theater managers worrying constantly about small crowds, Hoag says. He remembers bringing the Fred Waring group here for the price of rail fare to Buffalo.

“I knew Fred from the early days and when he found his bunch stranded in St. Louis he called me and said they’d play at the Michigan Theater if we would give them rail fare to Buffalo where they had an engagement scheduled. We did it, lost $1,200 but it was a great show,” Hoag

Walter Krasny has been Ann Arbor's police chief for a decade, but during the depression he was a high school kid living on his parents' farm near Whitmore Lake.

He remembers working with his father, a carpenter, putting up summer cottages for a cost of $500 and then working as a handyman and lifeguard at Whitmore Lake for $1 a day.

“No one had any money but you made do with what you had,” Krasny says. “You remember those days as you get older. When I finally hired in as an Ann Arbor policeman for $1,500 a year I thought I was a millionaire."

Fred Looker, retired Ann Arbor city clerk, was working in the treasurer's office in City Hall during the depression. He remembers the setting up of a "Poor Commission” which dealt with the jobless problem.

"There was a commissary set up on S. Ashley St. where flour and staples were given out to those who needed food," Looker says. “And if you worked for the city you many times took part of your pay in cash and part in scrip."

The scrip was issued in denominations up to $1 and Looker still keeps some of it as a reminder of tough times. He remembers buying his west side home in 1936 for less than the $4,400 for which it's now assessed.

“Things have gone up a little bit since '36,” Looker says wryly.

Bill O'Neal, long-time night maintainence supervisor at The Ann Arbor News, was a teen-ager growing up in a Pennsylvania steel town during the depression.

"When the hard times came the steel mill closed down," O’Neal recalls. "We lost our house, went on welfare. I can remember a lot of those days.”

He remembers getting up early in the morning and going to a store to get day-old bread for two loaves for a nickel, pulling his wagon to a commissary to pick up an allotment of clothing, eating a lot of navy beans, kidneys, liver.

“If there was any money left over, my mother would buy ginger snaps because they were the cheapest thing available." O’Neal says. "I can't look at one of those things today."

His mother made much of the clothing her three children wore and at one time would bake bread and have him deliver it to customers in his wagon.

"I used to hate to see Friday come because that was delivery day," O’Neal says. “I used to load up that wagon with bread and go peddling."

He recalls the poor of Steelton, Pa., picking up coal chunks along the railroad tracks to burn in their stoves and hucksters selling four bags of wood for 25 cents.

"There wasn’t electricity or a furnace in our house," he says. “Boy those upstairs bedrooms used to get cold in the Winter. It was a time. But we made it through."

Glen Wiseman, who still operates a Lima Township farm near Chelsea, had to learn farm management in a hurry as the Great Depression broke. His father died of cancer in 1929 and when he graduated from high school two years later it was up to him and an older hired hand to run the family's 100-acre farm.

“I can remember hauling a wagon of wheat to a mill and being paid $15 for it,” Wiseman says. ‘‘Hogs were bringing three cents a pound and steers six cents.

Tractors were a rarity in the farms around Chelsea during the depression and the Wisemans kept three horses to help till the fields. That meant raising hay crops each summer fo feed the horses through the winters.

“But farmers in those days could pretty well live off what they raised," Wiseman says. "The farm was a self-contained unit with little need for city products."

He remembers one city product which was needed. Machines to bind grain were a virtual necessity but when manufacturers refused to reduce their price of a binder from the $250 set in the late 1920s hard-pressed farmers were unable to buy

“A lot of farmers did with what they had. We kept some pretty old machines going,” he says.

Money was tight and even pennies were counted during the depression

"I don't recall what the charge for a telephone was in those days,” Wiseman says. "I suppose it was $1.25 or more a month. But even that was too much. A lot of the farmers in the Chelsea area got together and decided that was an expense they could do without. So the phones were taken out."

George A. Petersen, former sheriff of Washtenaw County and now retired from the University, remembers the depression as a time of scarce money and grasshoppers.

A native of Albion, Neb., Petersen was farming in his native state when the depression began.

“It seemed everything came at once,” he says. "The money became tight, farm prices went down and then we had a grasshopper invasion. The grasshoppers ate the field crops, ruined a lot of farms."

When it wasn't grasshoppers in the Nebraska fields, it was droughts.

"Some farmers had saved money during the 1920s,” the former sheriff says. "But the depression took it all. It was a tough time."

It was in Petersen’s native Nebraska that the receiver of a bank which failed tried to sell a woman’s horses, cows, pigs and farm equipment to satisfy a mortgage. Farmers in the area arranged for three of their number to bid on the items.

Roy Tice, a life-long Ann Arbor resident now retired in Ogemaw County near Hale, Mich., remembers coming from a meager but certain salaried job to a meager and uncertain position during the depression.

He recalls working in his father's sandwich shop on E. Washington St. for a time when hamburgers sold for 15 cents and you could get a baked ham sandwich for a quarter.

"But there wasn't much money around. Everyone was scratching,” he says.

In 1932 as the depression tightened its grip on the nation, Tice passed a civil service test and was appointed a clerk in the Ann Arbor post office.

All those interviewed agreed that while the Great Depression affected Ann Arbor, the city did not feel the pinch as much as did industrial communities.

“I think the University of Michigan being here helped ease the blow locally,” Jerry Hoag says. “Certainly we weren't as bad off as Detroit, Pontiac and Flint. But it was bad enough.”

“Yes," Fred Looker, retired from his years at City Hall, agrees. “It was bad enough. It gave you a taste of it."