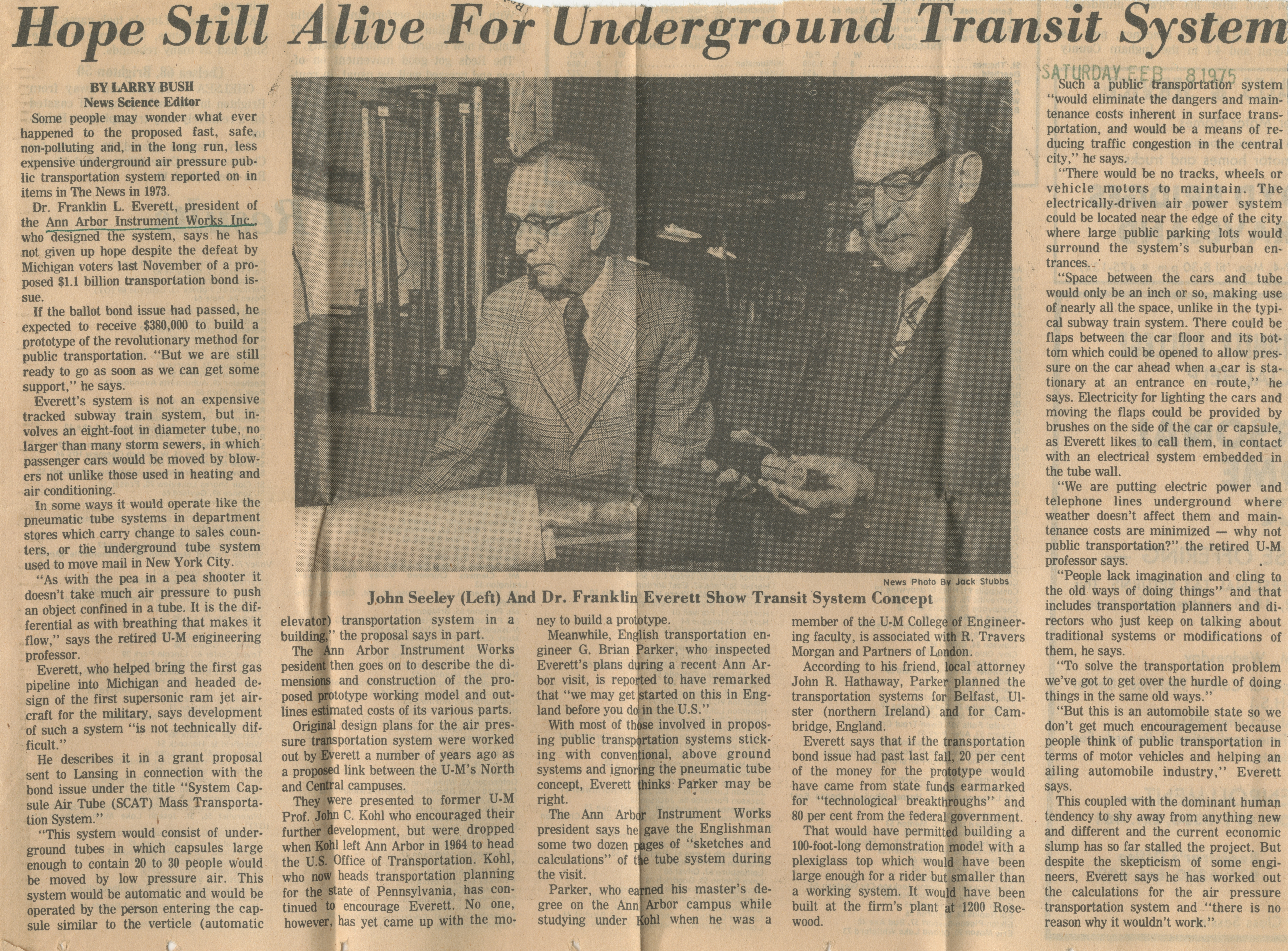 Some people may wonder what ever happened to the proposed fast, safe, non-polluting and, in the long run, less expensive underground air pressure public transportation system reported on in items in The News in 1973.

Dr. Franklin L. Everett, president of the Ann Arbor Instrument Works Inc., who "designed the system, says he has not given up hope despite the defeat by Michigan voters last November of a proposed $1.1 billion transportation bond issue.

If the ballot bond issue had passed, he expected to receive $380,000 to build a prototype of the revolutionary method for public transportation. “But we are still ready to go as soon as we can get some support,” he says.

Everett’s system is not an expensive tracked subway train system, but involves an eight-foot in diameter tube, no larger than many storm sewers, in which passenger cars would be moved by blowers not unlike those used in heating and air conditioning.

In some ways it would operate like the pneumatic tube systems in department stores which carry change to sales counters, or the underground tube system used to move mail in New York City.

“As with the pea in a pea shooter it doesn’t take much air pressure to push an object confined in a tube. It is the differential as with breathing that makes it flow,” says the retired U-M engineering professor.

Everett, who helped bring the first gas pipeline into Michigan and headed design of the first supersonic ram jet aircraft for the military, says development of such a system “is not technically difficult.”

He describes it in a grant proposal sent to Lansing in connection with the bond issue under the title “System Capsule Air Tube (SCAT) Mass Transportation System.

“This system would consist of underground tubes in which capsules large enough to contain 20 to 30 people would be moved by low pressure air. This system would be automatic and would be operated by the person entering the capsule similar to the vehicle (automatic elevator) transportation system in a building,” the proposal says in part.

The Ann Arbor Instrument Works president then goes on to describe the dimensions and construction of the proposed prototype working model and outlines estimated costs of its various parts.

Original design plans for the air pressure transportation system were worked out by Everett a number of years ago as a proposed link between the U-M’s North and Central campuses.

They were presented to former U-M Prof. John C. Kohl who encouraged their further development, but were dropped when Kohl left Ann Arbor in 1964 to head the U.S. Office of Transportation. Kohl, who now heads transportation planning for the state of Pennsylvania, has continued to encourage Everett. No one, however, has yet came up with the money to build a prototype.

Meanwhile, English transportation engineer G. Brian Parker, who inspected Everett’s plans during a recent Ann Arbor visit, is reported to have remarked that “we may get started on this in England before you do in the U.S.”

With most of those involved in proposing public transportation systems sticking with conventional, above ground systems and ignoring the pneumatic tube concept, Everett thinks Parker may be right.

The Ann Arbor Instrument Works president says he gave the Englishman some two dozen pages of “sketches and calculations” of the tube system during the visit.

Parker, who earned his master’s degree on the Ann Arbor campus while studying under Kohl when he was a member of the U-M College of Engineering faculty, is associated with R. Travers Morgan and Partners of London.

According to his friend, local attorney John R. Hathaway, Parker planned the transportation systems for Belfast, Ulster (northern Ireland) and for Cambridge, England.

Everett says that if the transportation bond issue had past last fall, 20 per cent of the money for the prototype would have came from state funds earmarked for “technological breakthroughs” and 80 per cent from the federal government.

That would have permitted building a 100-foot-long demonstration |model with a plexiglass top which would have been large enough for a rider but smaller than a working system. It would have been built at the firm’s plant at 1200 Rosewood.

Such a public' transportation system “would eliminate the dangers and maintenance costs inherent in surface transportation, and would be a means of reducing traffic congestion in the central city,” he says.

“There would be no tracks, wheels or vehicle motors to maintain. The electrically-driven air power system could be located near the edge of the city where large public parking lots would surround the system’s suburban entrances.. ’

“Space between the cars and tube would only be an inch or so, making use of nearly all the space, unlike in the typical subway train system. There could be flaps between the car floor and its bottom which could be opened to allow pressure on the car ahead when a car is stationary at an entrance en route,” he says. Electricity for lighting the cars and moving the flaps could be provided by brushes on the side of the car or capsule, as Everett likes to call them, in contact with an electrical system embedded in the tube wall.

“We are putting electric power and telephone lines underground where weather doesn’t affect them and maintenance costs are minimized — why not public transportation?” the retired U-M professor says.

“People lack imagination and cling to the old ways of doing things” and that includes transportation planners and directors who just keep on talking about traditional systems or modifications of them, he says.

“To solve the transportation problem we’ve got to get over the hurdle of doing things in the same old ways.”

“But this is an automobile state so we don’t get much encouragement because people think of public transportation in terms of motor vehicles and helping an ailing automobile industry,” Everett says.

This coupled with the dominant human tendency to shy away from anything new and different and the current economic slump has so far stalled the project. But despite the skepticism of some engineers, Everett says he has worked out the calculations for the air pressure transportation system and “there is no reason why it wouldn’t work.”