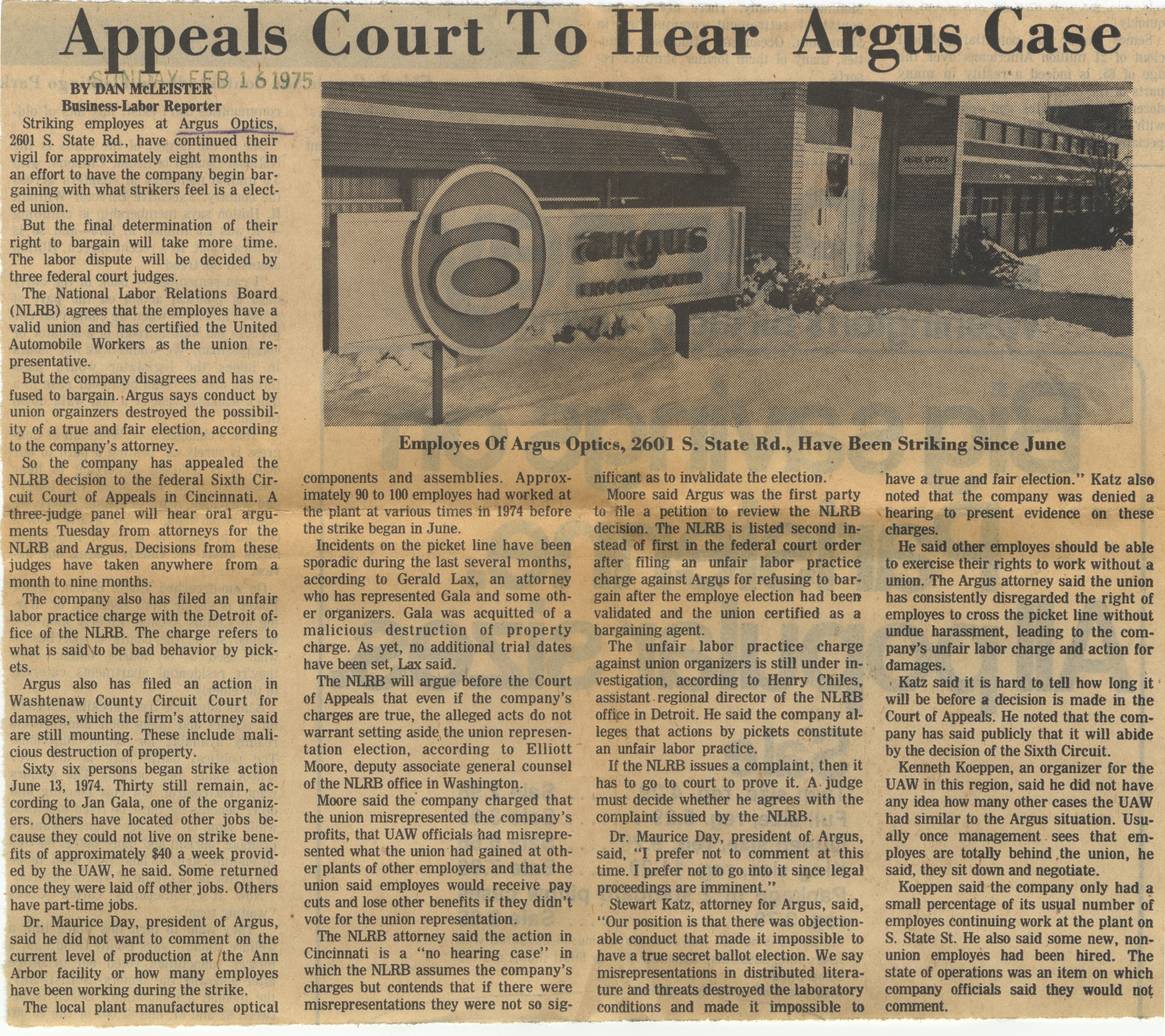 Striking employes at Argus Optics,
2601 S. State Rd., have continued their
vigil for approximately eight months in
an effort to have the company begin bar-
gaining with what strikers feel is a elect-
ed union.

But the final determination of their
right to bargain will take more time.
The labor dispute will be decided by
three federal court judges.

The National Labor Relations Board
(NLRB) agrees that the employes have a
valid union and has certified the United
Auto Workers as the union re-
presentative.

But the company disagrees and has re-
fused to bargain. Argus says conduct by
union orgainzers destroyed the possibil-
ity of a true and fair election, according
to the company's attorney.

So the company has appealed the
NLRB decision to the federal Sixth Cir-
cuit Court of Appeals in Cincinnati. A
three-judge panel will hear oral argu-
mentsTuesday from attorneys for the
NLRB and Argus. Decisions from these
judges have taken anywhere from a
month to nine months.

The company also has filed an unfair
labor practice charge with the Detroit of-
fice of the NLRB. The charge refers to
what is said 'to be bad behavior by pick-
ets.

Argus also has filed an action in
Washtenaw County Circuit Court for
damages which the firm's attorney said
are still mounting. These include mali-
cious destruction of property.

Sixty six persons began strike action
June 13, 74. Thirty still remain, ac-
cording to Jan Gala, one of the organiz-
ers. Others have located other jobs be-
cause they could not live on strike bene-
fits of approximately $40 a week provid-
ed by the UAW, he said. Some returned
once they were laid off other jobs. Others
have part-time jobs.

Dr. Maurice Day, president of Argus,
said he did not want to comment on the
current level of production at the Ann
Arbor facility or how many employes
have been working during the strike.

The local plant manufactures optical
components and assemblies. Approx-
imately 90 to 100 employes had worked at
the plant at various times in 1974 before
the strike began in June.

Incidents on the picket line have been
sporadic during the last several months,
according to Gerald Lax, an attorney
who has represented Gala and some oth-
er organizers. Gala was acquitted of a
malicious destruction of property
charge. As yet, no additional trial dates
have been set. Lax said.

The NLRB will argue before the Court
of Appeals that even if the company's
charges are true, the alleged acts do not
warrant setting aside the union represen-
tation election, according to Elliott
Moore, deputy associate general counsel
of the NLRB office in Washington.

Moore said the " company charged that
the union misrepresented the company's
profits, that UAW officials had misrepre-
sented what the union had gained at oth-
er plants of other employers and that the
union said employes would receive pay
cuts and lose other benefits it they didn't
vote for the union representation.

The NLRB attorney said the action in
Cincinnati is a "no hearing case" in
which the NLRB assumes the company's
charges but contends that if there were
m-representations they were not so sig-
nificant as to invalidate the election.

Moore said Argus was the first party
to file a petition to review the NLRB
decision. The NLRB is listed second in-
stead of first in the federal court order
after filing an unfair labor practice
charge against Argus for refusing to bar-
gain after the employe election had been
validated and the union certified as a
bargaining agent.

If the NLRB issues a complaint, then it
has to go to court to prove it. A judge
must decide whether he agrees with the
complaint issued by the NLRB.

Stewart Katz, attorney for Argus, said,
"Our position is that there was objection-
able that made it impossible to
have TU secret ballot election. We say
misrepresentations in distributed litera-
ture and threats destroyed the laboratory
conditions and made it impossible to

'have a true and fair election." Katz also
noted that the company was denied a
hearing to present evidence on these
charges.

He said other employes should be able
to exercise their rights to work without a
union. The Argus attorney said the union
has consistently disregarded the right of
employes to cross the picket line without
undue harassment, leading to the com-
pany's unfair labor charge and action for
damages.

Katz said it is hard to tell how long it
will be before a decision is made in the
Court of Appeals. He noted that the com-
pany has said publicly that it will abide
by the decision of the Sixth Circuit.

Kenneth Koeppen, an organizer for the
UAW in this region, said he did not have
any idea how many other cases the UAW
had similar to the Argus situation. Usu-
ally once managemer* """t? that em-
ployes are totally bei union, he
said, they sit down and negotiate.

Koeppen said the company only had a
small percentage of its usual number of
employes continuing work at the plant on
S. State St. He also said some new, non-
union employ had been hired. The
state of operations was an item on which
company officials said they would not
comment.