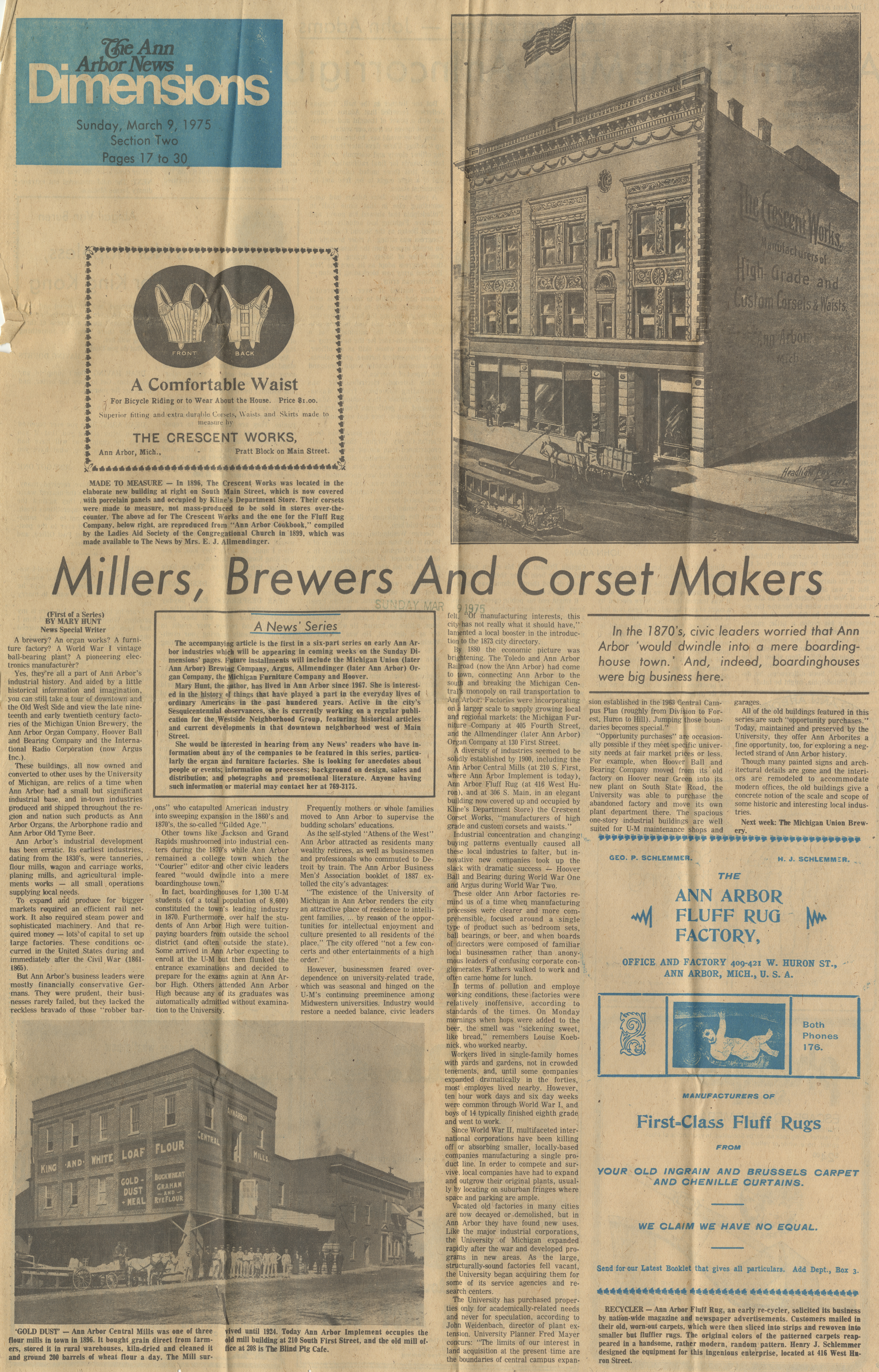 For Bicycle Riding or to Wear About the House. Price $1.00

by the Ladies Aid Society ol the Congregational Church in 1899. which was
made available to The News by Mrs. E. J. IHmcndiDger.

(First of a Series)
BY MABY HUNT
Ntwt Special Wriler

))' aliening. The Toledo and Ann Arbor
K..;lroad (now the Ann Arbor) had come
li (own. connecting Ann Arbor to the
si.Jgl and breaking the Michigan Cen-
tr.ilt monopoly on rail transportation to

garages.
All of the old buildings featured in this

Today, maintained and preserved by the

Though many painted signs and arch-
modern offices, the old buildings give a

on a larger- scale to sapply growin" '-"'
and regional markets: the Michis.
nitu.-e Company at W5 Fourth

A diversity of industries seemed to be
solidly established by 190(1. including the
Ann Arbor Central Mills 1.11 2111 S First
whce Ann Arbur Impl.
Am. Arbor Fluff Rn-;

converted to "the
of Michigan, are
Ann Arbor had

and pnotographs and promotional literatu
lion or material may contact her at 7(9-3175,

Ann Aroor ma iyme w Ann Arbor's industriin has been erratic. Its ear' dating from ihr ISSO'-,,•mple^ To expand and produce for bigger Kapids mushroomed into ind lei-s during the 1870's while"Courier" editor and other c feared "would dwindle in boardinghouse town." In fact, boardinghouses fo students (of a total populati which the and professionals who commuted to De-o a mere Men's- Association booklet of 1887 extolled the city's advantages: 1,30(1 U.M "The existence of the University of on of 8,600) Michigan in Ann Arbor renders the city buying patterns event".Ball and Bearing during World War One and Argus during World War Two. Tlirse older Ann Arbor factories retype of product such as bedroom sets, ball bearings, or beer, and when boards led for U.M niiii •li: The Michigan Union Bre
-.EO. P. SCHLE ^OFFICE A/ MMEH. H. S. SCHt.EMIVlSB.THEANN ARBOR FLUFF RUG (^ FACTORY,ND FACTORY 409-421 W. HURON ST., &HK ARBOR, MICH., U. S. A.
work. It also required steam power and , ''islicated machinery. And that re-' money — lots of capital to set up in 1870. Furthermore, over h dents of Ann Arbor High w paying boarders from nutsid district (and often outside the state), place." The citv offered "not a few con-
immediately after the Civil War (1861-1865). enroll at the U-M but thenprepare for the exam?. aa;ain bor High. Others attended flunked the order." decided to However, business
i;ey lacked the:• .""-C- -'-•:"te tion to the I'niversUy-,, ,..,^,t standards of the times. On Monday mornings when hops were added to the•owded g 3"^ Both Phones 176.

YOUR OLD INGRAIN AND BRUSSELS
AND CHENILLE CURTAINS

WE CLAIM WE HAVE WO EQUAL.

rapidly after t
grains in ne
structurally-so
the University
some of its
search centers
Thr Univer:

rited until U24. Today ABB Arbor Implement occupies the tension University
lid null building at 210 South First Street, and the old mill of- concurs "The limn
Bee at 208 is The Blind Pig Cafe. land acquisition at i
- the boundaries of ce