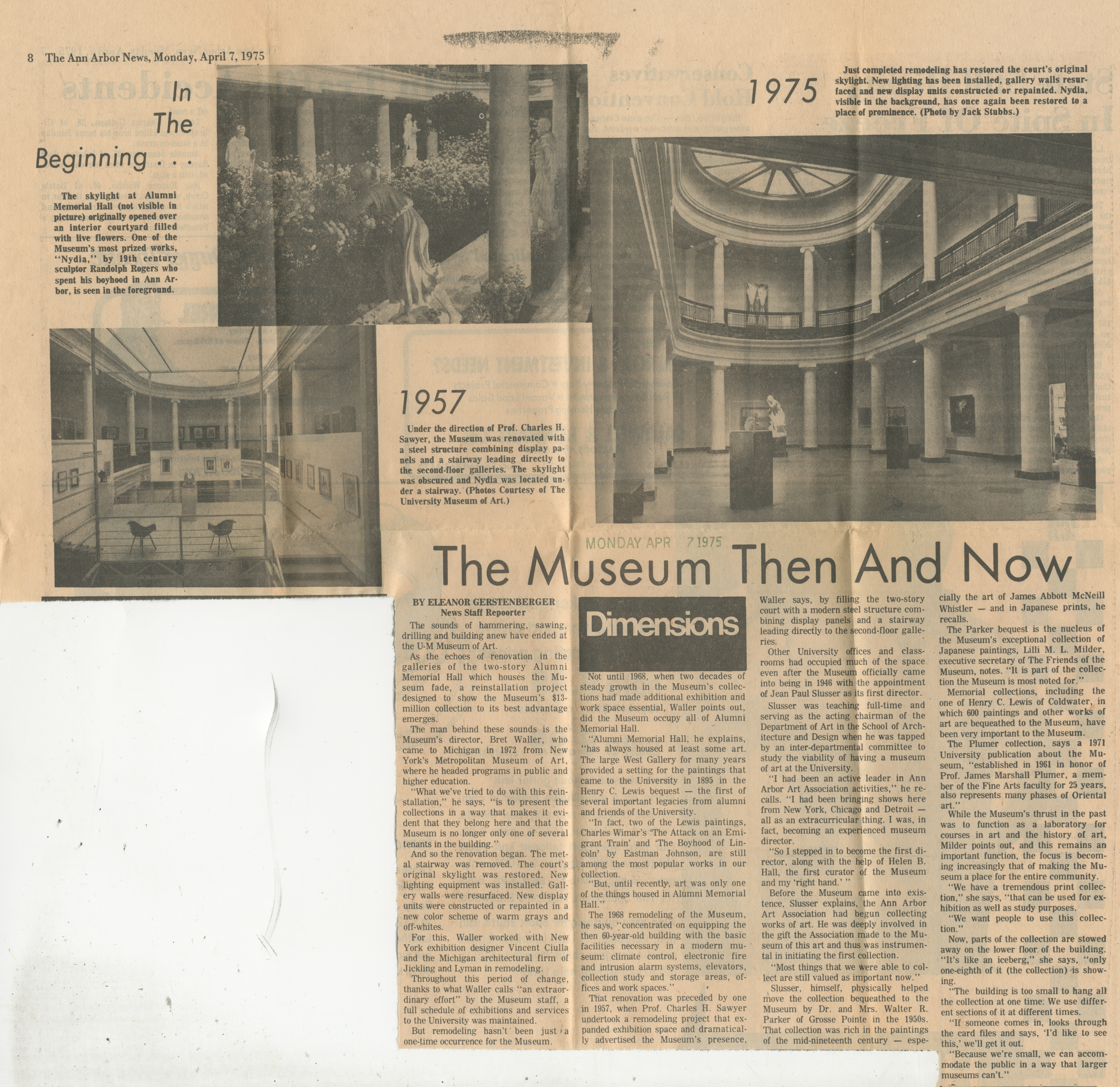 The skylight at Alumni Memorial Hall (not visible in picture) originally opened over an interior courtyard filled with live flowers. One of the Museum’s most prized works, “Nydia,” by 19th century sculptor Randolph Rogers who spent his boyhood in Ann Arbor, is seen in the foreground.

Under the direction of Prof. Charles H. Sawyer, the Museum was renovated with a steel structure combining display panels and a stairway leading directly to the second-floor galleries. The skylight was obscured and Nydia was located under a stairway. (Photos Courtesy of The University Museum of Art.)

Just completed remodeling has restored the court’s original skylight. New lighting has been installed, gallery walls resurfaced and new display units constructed or repainted. Nydia, visible in the background, has once again been restored to a place of prominence. (Photo by Jack Stubbs.)

The sounds of hammering, sawing, drilling and building anew have ended at the U-M Museum of Art.

As the echoes of renovation in the galleries of the two-story Alumni Memorial Hall which houses the Museum fade, a reinstallation project designed to show the Museum’s $13-million collection to its best advantage emerges.

The man behind these sounds is the Museum’s director, Bret Waller, who came to Michigan in 1972 from New York’s Metropolitan Museum of Art, where he headed programs in public and higher education.

“What we’ve tried to do with this reinstallation,” he says, “is to present the collections in a way that makes it evident that they belong here and that the Museum is no longer only one of several tenants in the building.”

And so the renovation began. The metal stairway was removed. The court’s original skylight was restored. New lighting equipment was installed. Gallery walls were resurfaced. New display units were constructed or repainted in a new color scheme of warm grays and off-whites.

For this, Waller worked with New York exhibition designer Vincent Ciulla and the Michigan architectural firm of Jickling and Lyman in remodeling.

Throughout this period of change, thanks to what Waller calls “an extraordinary effort” by the Museum staff, a full schedule of exhibitions and services to the University was maintained.

But remodeling hasn’t been just > a one-time occurrence for the Museum. Not until 1968, when two decades of steady growth in the Museum’s collections had made additional exhibition and work space essential, Waller points out, did the Museum occupy all of Alumni Memorial Hall.

“Alumni Memorial Hall, he explains, “has always housed at least some art. The large West Gallery for many years provided a setting for the paintings that came to the University in 1895 in the Henry C. Lewis bequest — the first of several important legacies from alumni and friends of the University.

“In fact, two of the Lewis paintings, Charles Wimar’s ‘The Attack on an Emigrant Train’ and ‘The Boyhood of Lincoln’ by Eastman Johnson, are still among the most popular works in our collection.

“But, until recently, art was only one of the things housed in Alumni Memorial Hall.”

The 1968 remodeling of the Museum, he says, “concentrated on equipping the then 60-year-old building with the basic facilities necessary in a modern museum: climate control, electronic fire and intrusion alarm systems, elevators, collection study and storage areas, offices and work spaces.”

That renovation was preceded by one in 1957, when Prof. Charles H. Sawyer undertook a remodeling project that expanded exhibition space and dramatically advertised the Museum’s presence, Waller says, by filling the two-story court with a modern steel structure combining display panels and a stairway leading directly to the second-floor galleries.

Other University offices and classrooms had occupied much of the space even after the Museum officially came into being in 1946 with the appointment of Jean Paul Slusser as its first director.

Slusser was teaching full-time and serving as the acting chairman of the Department of Art in the School of Architecture and Design when he was tapped by an inter-departmental committee to study the viability of having a museum of art at the University.

“I had been an active leader in Ann Arbor Art Association activities,” he recalls. “I had been bringing shows here from New York, Chicago and Detroit — all as an extracurricular thing. I was, in fact, becoming an experienced museum director.

“So I stepped in to become the first director, along with the help of Helen B. Hall, the first curator of the Museum and my ‘right hand.’ ”

Before the Museum came into existence, Slusser explains, the Ann Arbor Art Association had begun collecting works of art. He was deeply involved in the gift the Association made to the Museum of this art and thus was instrumental in initiating the first collection.

“Most things that we were able to collect are still valued as important now.”

Slusser, himself, physically helped move the collection bequeathed to the Museum by Dr. and Mrs. Walter R. Parker of Grosse Pointe in the 1950s. That collection was rich in the paintings of the mid-nineteenth century — especially the art of James Abbott McNeill Whistler — and in Japanese prints, he recalls.

The Parker bequest is the nucleus of the Museum’s exceptional collection of Japanese paintings, Lilli M. L. Milder, executive secretary of The Friends of the Museum, notes. “It is part of the collection the Museum is most noted for.”

Memorial collections, including the one of Henry C. Lewis of Coldwater, in which 600 paintings and other works of art are bequeathed to the Museum, have been very important to the Museum.

The Plumer collection, says a 1971 University publication about the Museum, “established in 1961 in honor of Prof. James Marshall Plumer, a member of the Fine Arts faculty for 25 years, also represents many phases of Oriental art.”

While the Museum’s thrust in the past was to function as a laboratory for courses in art and the history of art. Milder points out, and this remains an important function, the focus is becoming increasingly that of making the Museum a place for the entire community.

“We have a tremendous print collection,” she says, “that can be used for exhibition as well as study purposes.

“We want people to use this collection.”

Now, parts of the collection are stowed away on the lower floor of the building. “It’s like an iceberg,” she says, “only one-eighth of it (the collection) is showing.

“The building is too small to hang all the collection at one time. We use different sections of it at different times.

“If someone comes in, looks through the card files and says, ‘I’d like to see this,’ we’ll get it out.

“Because we’re small, we can accommodate the public in a way that larger museums can’t.”