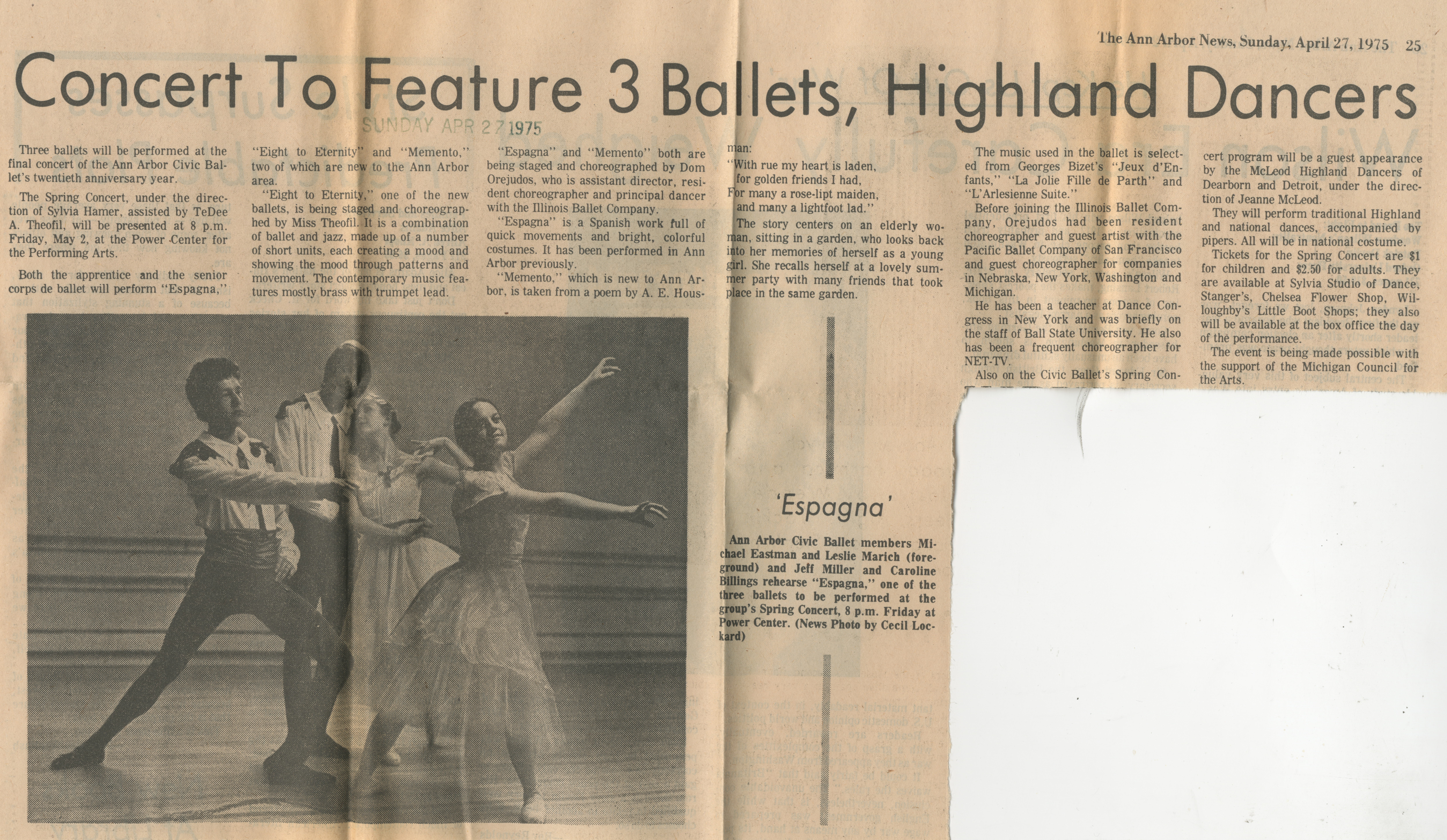 Three ballets will be performed at the final concert of the Ann Arbor Civic Ballet’s twentieth anniversary year.

The Spring Concert, under the direction of Sylvia Hamer, assisted by TeDee A. Theofil, will be presented at 8 p.m. Friday, May 2, at the Power Center for the Performing Arts.

Both the apprentice and the senior corps de ballet will perform “Espagna,” “Eight to Eternity" and “Memento,” two of which are new to the Ann Arbor area.

“Eight to Eternity,” one of the new ballets, is being staged and choreographed by Miss Theofil. It is a combination of ballet and jazz, made up of a number of short units, each creating a mood and showing the mood through patterns and movement. The contemporary music features mostly brass with trumpet lead.

“Espagna” and “Memento” both are being staged and choreographed by Dom Orejudos, who is assistant director, resident choreographer and principal dancer with the Illinois Ballet Company.

“Espagna” is a Spanish work full of quick movements and bright, colorful costumes. It has been performed in Ann Arbor previously.

“Memento,” which is new to Ann Arbor, is taken from a poem by A. E. Housman:

“With rue my heart is laden, for golden friends I had,

For many a rose-lipt maiden, and many a lightfoot lad.”

The story centers on an elderly woman, sitting in a garden, who looks back at her memories of herself as a young girl. She recalls herself at a lovely summer party with many friends that took place in the same garden.

He has been a teacher at Dance Congress in New York and was briefly on the staff of Ball State University. He also has been a frequent choreographer for NET-TV.

Also on the Civic Ballet s Spring Concert program will be a guest appearance by the McLeod Highland Dancers of Dearborn and Detroit, under the direction of Jeanne McLeod.

They will perform traditional Highland and national dances, accompanied by pipers. All will be in national costume.

Tickets for the Spring Concert are $1 for children and $2.50 for adults. They are available at Sylvia Studio of Dance, Stanger’s, Chelsea Flower Shop, Willoughby’s Little Boot Shops; they also will be available at the box office the day of the performance.

The event is being made possible with the support of the Michigan Council for the Arts.