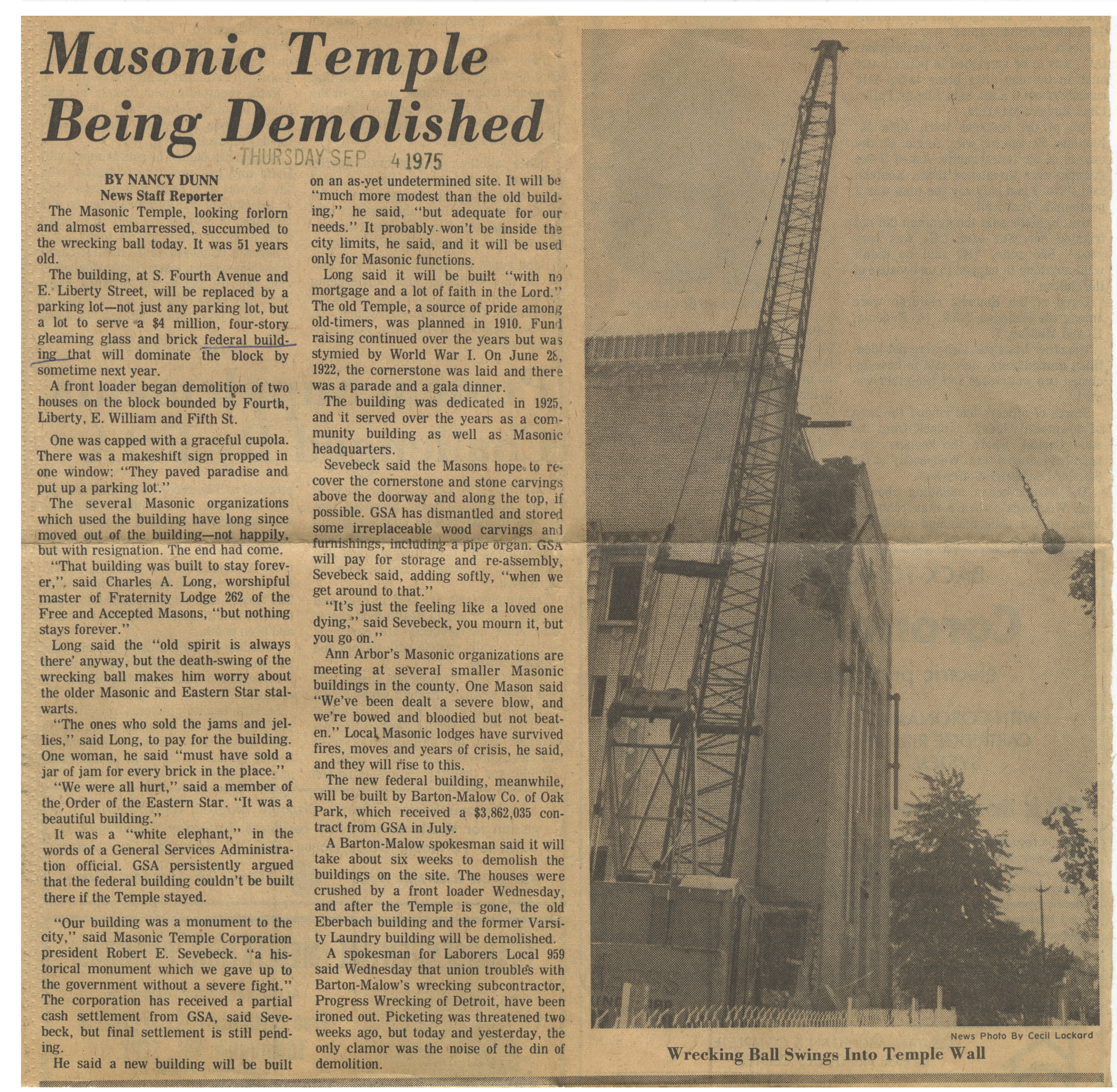 The Masonic Temple, looking forlorn
and almost embarressed, succumbed to
the ^ ball today. It was 51 years
old.

The building, at S. Fourth Avenue and
E. I ^ replaced by a
park ,,„,., n,i parking lot, but
a lot to serve a $4 million, four-story
gleaming glass and brick federaJLbuilcL
^JngLJhat will dominate The "block by
,5: sometime next year.

A front loader began demolition of two
houses on the block bounded by Fourth,
Liberty, E. William and Fifth St.

One was capped with a graceful cupola.
'There was a makeshift sign propped in
I one window: "They paved paradise and
put up a parking lot."

The several Masonic organizations
which used the buildi; ' long since
moved out of the buil.i , ..^i happily,
""but with resignation. The end had come.
I' "That building was built to stay forev-
^ er,", said Charles A. Long, worshipful
I; master of Fraternity Lodge 262 of the
I Free and Accepted Masons, "but nothing
stay fnf^'"r."

1 i the "old spirit is always
there anyway, but the death-swing of the
wrecking ball makes him worry about
the older Masonic and Eastern Star stal-
warts.

"the ones who sold the jams and jel-
lies," said Long, to pay for the building.
One woman, he said "must have sold a
jar of jam for every brick in the place."

"We were all hurt," sai( sber of
the. Order of the Eastern Star. it was a
beautiful building."

E, It was a "white elephant," in the
, words of a General Services Administra-
- tjion official. GSA persistently argued

that the federal building couldn't be built

there if the T ayed

"Our building was a monument to the
city," said Masonic Temple Corporation
president Robert E. Sevebeck. "a his-
torical monument which we gave up to
the government without a severe fight."
The corporation has received a partial
cash settlement from GSA, said Seve-
beck, but final settlement is still pend-
ing.

He said a new building will be buil'

on an idetermined site. It will be
"mucii ;, ru modest than the old build-
ing," he said, "but adequate for our
needs." It probably, won't be inside ths
city limits, he said, and it will be used
only for Masonic functions.

The building was dedicated in 1925,
and it served over the years as a com-
munity building as well as Masonic
headquarters.

Sevebeck said the Masons hope to re-
cover the cornerstone and stone carvings
above the doorway and along the top, if

furnishing;-,, iiiduuiiy a pipe organ. Gb-\
will pay for storage and re-assembly,
Sevebeck said, adding softly, "when we
get around to that."

"It's just the feeling like a loved one
dying," said Sevebeck, you mourn it, but
you go on."

Ann Arbor's Masonic organizations are
meeting at several smaller Masonic
buildings in the county. One Mason said
"We've been dealt a severe blow, and
we're bowed and bloodied but not beat-
en." Locale Masonic lodges have survived
fn-p< moves and years of crisis, he said,
will rise to this.

A Barton-Malow spokesman san
W- ihout six weeks to demolish ihe
' on the site. The houses were
crusned by a front loader Wednesday,
and after the Temple is gone, the old
Eberbach building and the fo
ty Laundry building will be d-> ,; is;)! -i

A : in for Laborers Local 959
said \\.^.._ ,iay that union trouble's with
Barton-Malow's wrecking subcontractor.
Progress Wrecking of Detroit, have been
ironed out. Picketing was threatened two
weeks ago, but today and yesterday, the
only clamor was the noise of the din of
tolition.