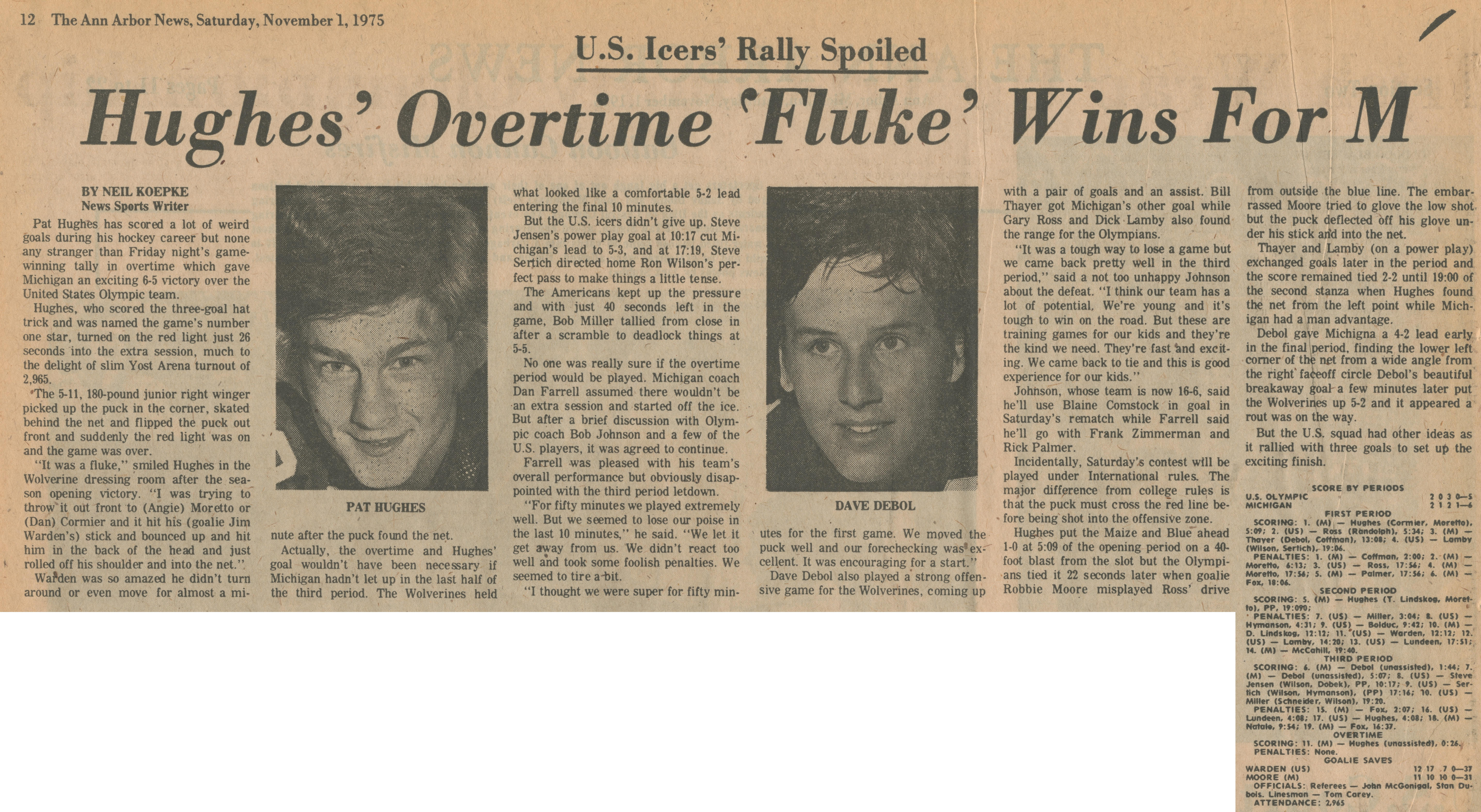 Pat Hughes has scored a lot of weird goals during his hockey career but none any stranger than Friday night's game winning tally in overtime which gave Michigan an exciting 6-5 victory over the United States Olympic team.

Hughes, who scored the three-goal hat trick and was named the game's number one star, turned on the red light just 26 seconds into the extra session, much to the delight of slim Yost Arena turnout of 2,965.

The 5-11,180-pound junior right winger picked up the puck in the corner, skated behind the net and flipped the puck out front and suddenly the red light was on and the game was over.

“It was a fluke," smiled Hughes in the Wolverine dressing room after the season opening victory. "I was trying to throw it out front to (Angie) Moretto or (Dan) Cormier and it hit his (goalie Jim Warden's) stick and bounced up and hit him in the back of the head and just rolled off his shoulder and into the net.”

Warden was so amazed he didn’t turn around or even move for almost a minute after the puck found the net.

Actually, the overtime and Hughes' goal wouldn't have been necessary if Michigan hadn’t let up in the last half of the third period. The Wolverines held what looked like a comfortable 5-2 lead entering the final 10 minutes.

But the U.S. icers didn’t give up. Steve Jensen's power play goal at 10:17 cut Michigan's lead to 5-3, and at 17:19, Steve Sertich directed home Ron Wilson's perfect pass to make things a little tense.

The Americans kept up the pressure and with just 40 seconds left in the game, Bob Miller tallied from close in after a scramble to deadlock things at 5-5.

No one was really sure if the overtime period would be played. Michigan coach Dan Farrell assumed there wouldn't be an extra session and started off the ice. But after a brief discussion with Olympic coach Bob Johnson and a few of the U.S. players, it was agreed to continue.

Farrell was pleased with his team's overall performance but obviously disappointed with the third period letdown.

"For fifty minutes we played extremely well. But we seemed to lose our poise in the last 10 minutes," he said. "We let it get away from us. We didn't react too well and took some foolish penalties. We seemed to tire a bit.

"I thought we were super for fifty minutes for the first game. We moved the puck well and our forechecking was excellent. It was encouraging for a start.”

Dave Debol also played a strong offensive game for the Wolverines, coming up with a pair of goals and an assist. Bill Thayer got Michigan's other goal while Gary Ross and Dick Lamby also found the range for the Olympians.

"It was a tough way to lose a game but we came back pretty well in the third period," said a not too unhappy Johnson about the defeat. "I think our team has a lot of potential. We're young and it’s tough to win on the road. But these are training games for our kids and they’re the kind we need. They’re fast and exciting. We came back to tie and this is good experience for our kids.”

Johnson, whose team is now 16-6, said he'll use Blaine Comstock in goal in Saturday's rematch while Farrell said he’ll go with Frank Zimmerman and Rick Palmer.

Incidentally, Saturday's contest will be played under International rules. The major difference from college rules is that the puck must cross the red line before being shot into the offensive zone.

Hughes put the Maize and Blue' ahead 1-0 at 5:09 of the opening period on a 40-foot blast from the slot but the Olympians tied it 22 seconds later when goalie Robbie Moore misplayed Ross’ drive
from outside the blue line. The embarrassed Moore tried to glove the low shot but the puck deflected off his glove under his stick arid into the net.

Thayer and Lamby (on a power play) exchanged goals later in the period and the score remained tied 2-2 until 19:00 of the second stanza when Hughes found the net from the left point while Michigan had a man advantage.

Debol gave Michigan a 4-2 lead early in the final period, finding the lower left corner of the net from a wide angle from the right faceoff circle Debol's beautiful breakaway goal a few minutes later put the Wolverines up 5-2 and it appeared a rout was on the way.

But the U.S. squad had other ideas as it rallied with three goals to set up the exciting finish.