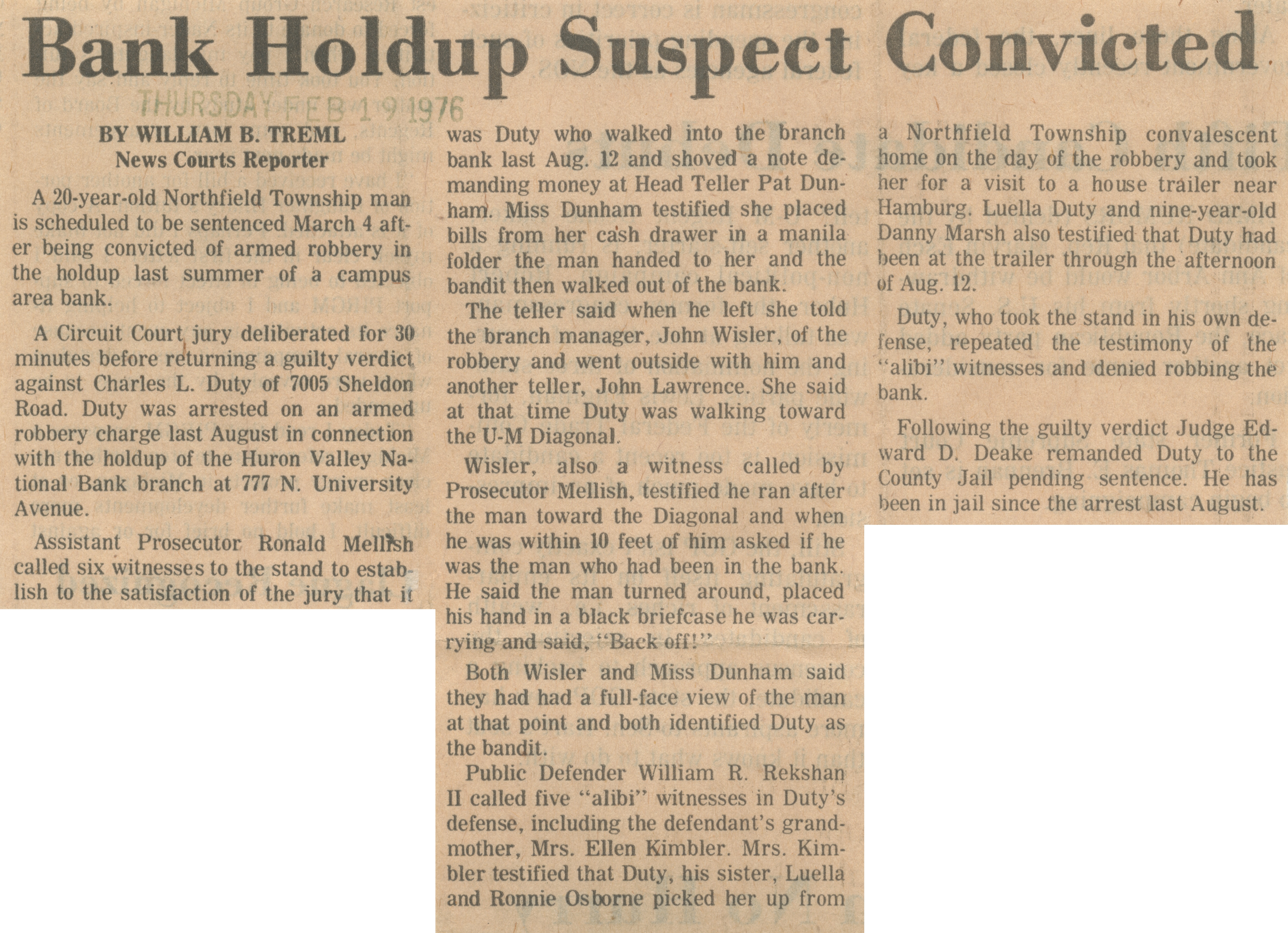 BY WILLIAM B. TREML

A 20-year-old Northfield Township man is scheduled to be sentenced March 4 after being convicted of armed robbery in the holdup last summer of a campus area bank.

A Circuit Court jury deliberated for 30 minutes before returning a guilty verdict against Charles L. Duty of 7005 Sheldon Road. Duty was arrested on an armed robbery charge last August in connection with the holdup of the Huron Valley National Bank branch at 777 N. University Avenue.

Assistant Prosecutor Ronald Mellish called six witnesses to the stand to establish to the satisfaction of the jury that it was Duty who walked into the branch bank last Aug. 12 and shoved a note demanding money at Head Teller Pat Dunham. Miss Dunham testified she placed bills from her cash drawer in a manila folder the man handed to her and the bandit then walked out of the bank.

The teller said when he left she told the branch manager, John Wisler, of the robbery and went outside with him and another teller, John Lawrence. She said at that time Duty was walking toward the U-M Diagonal.

Wisler, also a witness called by Prosecutor Mellish, testified he ran after the man toward the Diagonal and when he was within 10 feet of him asked if he was the man who had been in the bank. He said the man turned around, placed his hand in a black briefcase he was carrying and said, “Back off!”

Both Wisler and Miss Dunham said they had had a full-face view of the man at that point and both identified Duty as the bandit.

Public Defender William R. Rekshan II called five “alibi” witnesses in Duty’s defense, including the defendant’s grandmother, Mrs. Ellen Kimbler. Mrs. Kimbler testified that Duty, his sister, Luella and Ronnie Osborne picked her up from a Northfield Township convalescent home on the day of the robbery and took her for a visit to a house trailer near Hamburg. Luella Duty and nine-year-old Danny Marsh also testified that Duty had been at the trailer through the afternoon of Aug. 12.

Duty, who took the stand in his own defense, repeated the testimony of the “alibi” witnesses and denied robbing the bank.

Following the guilty verdict Judge Edward D. Deake remanded Duty to the County Jail pending sentence. He has been in jail since the arrest last August.