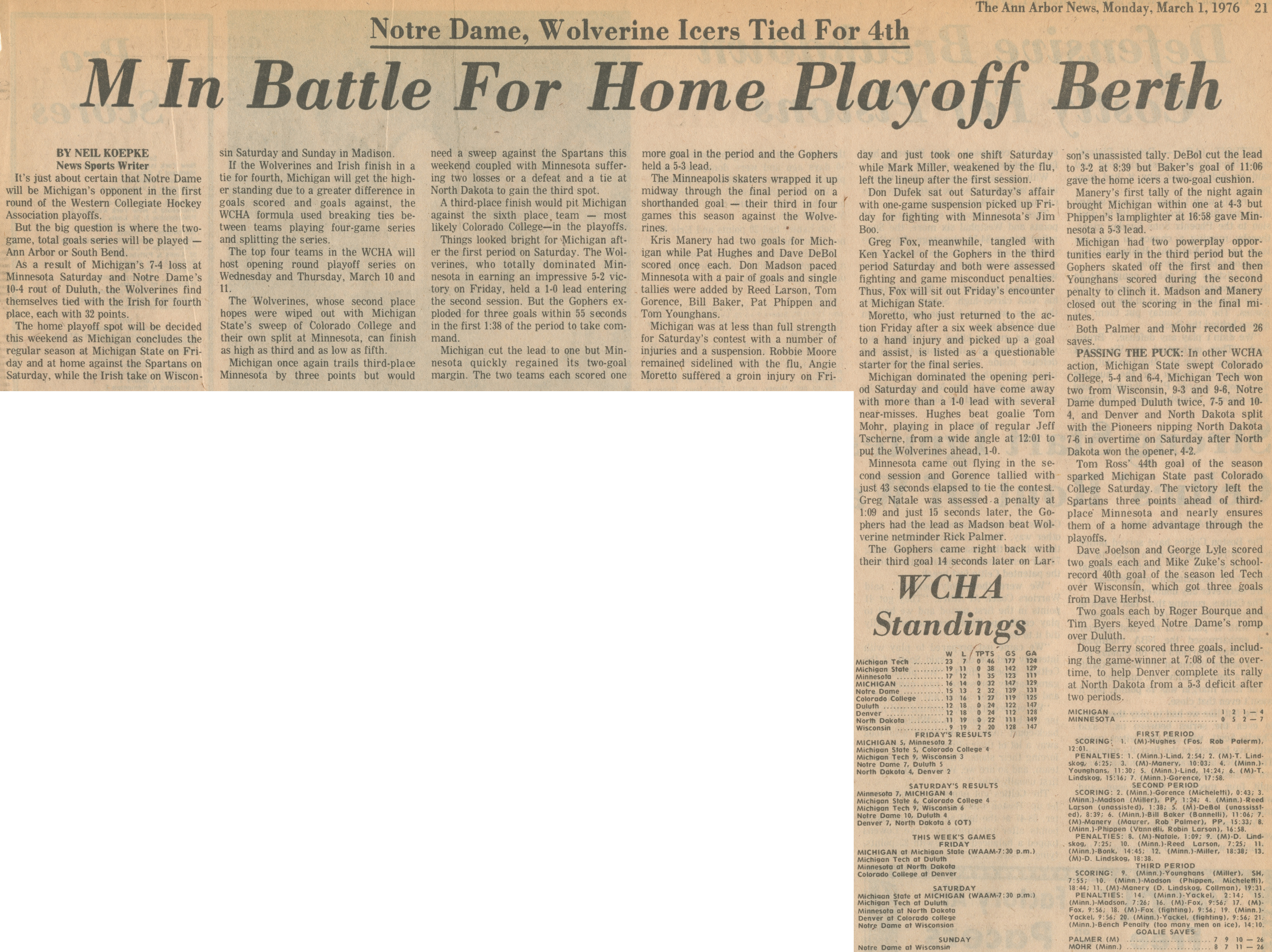 It’s just about certain that Notre Dame will be Michigan’s opponent in the first round of the Western Collegiate Hockey Association playoffs.

But the big question is where the two-game, total goals series will be played — Ann Arbor or South Bend.

As a result of Michigan’s 7-4 loss at Minnesota Saturday and Notre Dame’s 10-4 rout of Duluth, the Wolverines find themselves tied with the Irish for fourth place, each with 32 points.

The home playoff spot will be decided this weekend as Michigan concludes the regular season at Michigan State on Friday and at home against the Spartans on Saturday, while the Irish take on Wisconsin Saturday and Sunday in Madison.

If the Wolverines and Irish finish in a tie for fourth, Michigan will get the higher standing due to a greater difference in goals scored and goals against, the WCHA formula used breaking ties between teams playing four-game series and splitting the series.

The top four teams in the WCHA will host opening-round playoff series on Wednesday and Thursday, March 10 and 11.

The Wolverines, whose second-place hopes were wiped out with Michigan State’s sweep of Colorado College and their own split at Minnesota, can finish as high as third and as low as fifth.

Michigan once again trails third-place Minnesota by three points but would need a sweep against the Spartans this weekend coupled with Minnesota suffering two losses or a defeat and a tie at North Dakota to gain the third spot.

A third-place finish would pit Michigan against the sixth place, team — most likely Colorado College—in the playoffs.

Things looked bright for Michigan after the first period on Saturday. The Wolverines, who totally dominated Minnesota in earning an impressive 5-2 victory on Friday, held a 1-0 lead entering the second session. But the Gophers exploded for three goals within 55 seconds in the first 1:38 of the period to take command.

Michigan cut the lead to one but Minnesota quickly regained its two-goal margin. The two teams each scored one more goal in the period and the Gophers held a 5-3 lead.

The Minneapolis skaters wrapped it up midway through the final period on a shorthanded goal — their third in four games this season against the Wolverines.

Kris Manery had two goals for Michigan while Pat Hughes and Dave DeBoi scored once each. Don Madson paced Minnesota with a pair of goals and single tallies were added by Reed Larson, Tom Gorence, Bill Baker, Pat Phippen, and Tom Younghans.

Michigan was at less than full strength for Saturday’s contest with a number of injuries and a suspension. Robbie Moore remained sidelined with the flu, Angie Moretto suffered a groin injury on Friday and just took one shift Saturday while Mark Miller, weakened by the flu, left the lineup after the first session.

Don Dufek sat out Saturday’s affair with one-game suspension picked up Friday for fighting with Minnesota's Jim Boo, Greg Fox, meanwhile, tangled with Ken Yackel of the Gophers in the third period Saturday and both were assessed fighting and game misconduct penalties. Thus, Fox will sit out Friday’s encounter at Michigan State.

Moretto, who just returned to the action Friday after a six-week absence due to a hand injury and picked up a goal and assist, is listed as a questionable starter for the final series.

Michigan dominated the opening period Saturday and could have come away with more than a 1-0 lead with several near-misses. Hughes beat goalie Tom Mohr, playing in place of regular Jeff Tscherne, from a wide-angle at 12:01 to pul the Wolverines ahead, 1-0.

Minnesota came out flying in the second session and Gorence tallied with just 43 seconds elapsed to tie the contest. Greg Natale was assessed a penalty at 1:09 and just 15 seconds later, the Gophers had the lead as Madson beat Wolverine netminder Rick Palmer.

The Gophers came right back with their third goal 14 seconds later on Larson’s unassisted tally. DeBoi cut the lead to 3-2 at 8:39 but Baker’s goal of 11:06 gave the home icers a two-goal cushion.

Manery’s first tally of the night again brought Michigan within one at 4-3 but Phippen’s lamplighter at 16:58 gave Minnesota a 5-3 lead.

Michigan had two powerplay opportunities early in the third period but the Gophers skated off the first and then Younghans scored during the second penalty to clinch it. Madson and Manery closed out the scoring in the final minutes.

Both Palmer and Mohr recorded 26 saves.

PASSING THE PUCK: In other WCHA action, Michigan State swept Colorado College, 5-4 and 6-4, Michigan Tech won two from Wisconsin, 9-3 and 9-6, Notre Dame dumped Duluth twice, 7-5 and 10-4, and Denver and North Dakota split with the Pioneers nipping North Dakota 7-6 in overtime on Saturday after North Dakota won the opener, 4-2.

Tom Ross' 44th goal of the season sparked Michigan State past Colorado College Saturday. The victory left the Spartans three points ahead of third-place Minnesota and nearly ensures them of a home advantage through the playoffs.

Dave Joelson and George Lyle scored two goals each and Mike Zuke's school-record 40th goal of the season led Tech over Wisconsin, which got three goals from Dave Herbst.

Doug Berry scored three goals, including the game-winner at 7:08 of the overtime. to help Denver complete its rally at North Dakota from a 5-3 deficit after two periods.