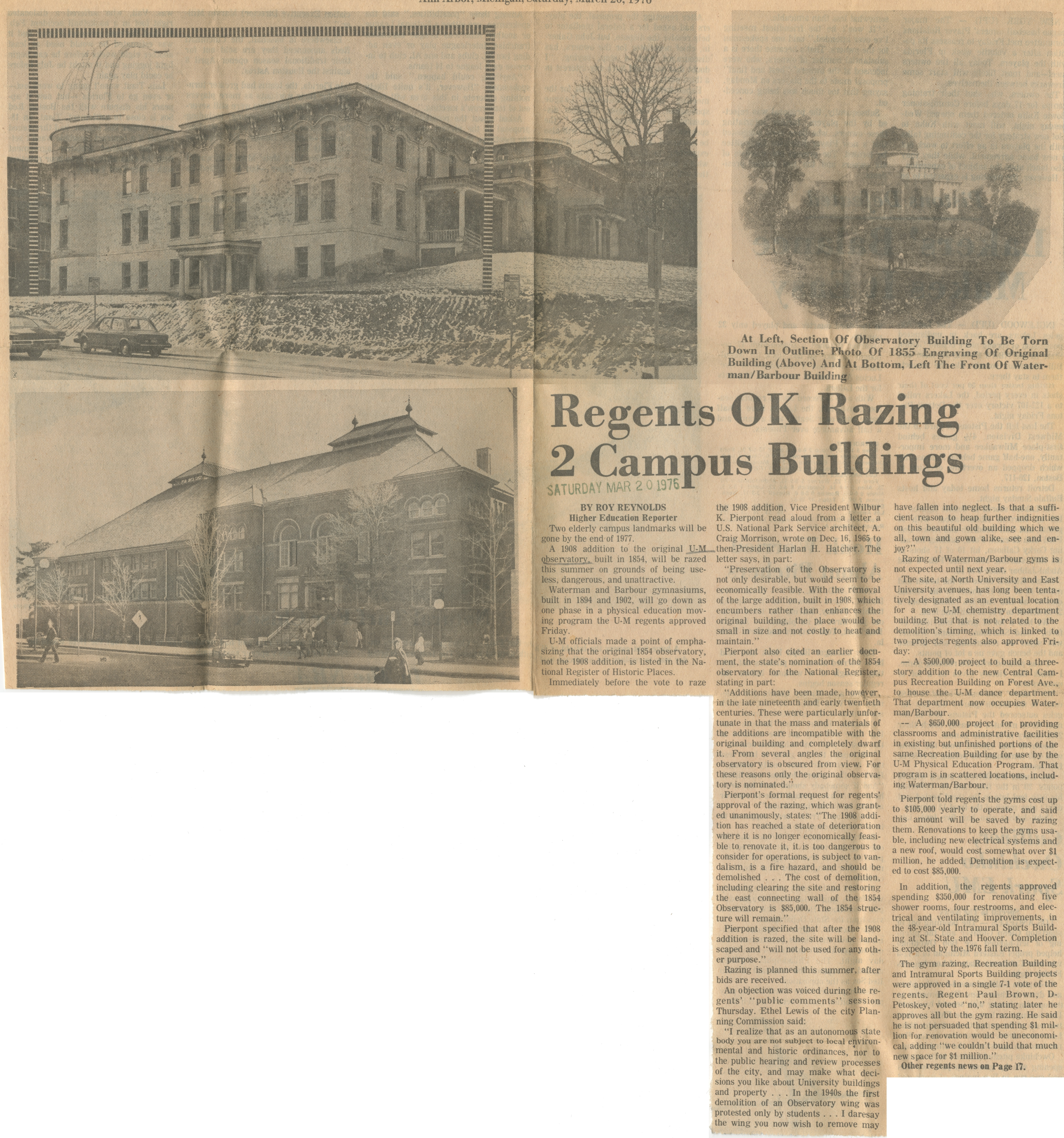 At Left, Section of Observatory Building To Be Torn Down In Outline: Photo Of 1855 Engraving Of Original Building (Above) And At Bottom, Left The Front Of Waterman/Barbour Building

Two elderly campus landmarks will be gone by the end of 1977.

A 1908 addition to the original U-M Observatory, built in 1854, will be razed this summer on grounds of being useless, dangerous, and unattractive.

Waterman and Barbour gymnasiums, built in 1894 and 1902, will go down as one phase in a physical education moving program the U-M regents approved Friday.

U-M officials made a point of emphasizing that the original 1854 observatory, not the 1908 addition, is listed in the National Register of Historic Places.

Immediately before the vote to raze the 1908 addition, Vice President Wilbur K. Pierpont read aloud from a letter a U. S. National Park Service architect, A. Craig Morrison, wrote on Dec. 16, 1965 to then-President Harlan H. Hatcher.  The letter says in part:

“Preservation of the Observatory is not only desirable, but would seem to be  economically feasible. With the removal of the large addition, built in 1908, which encumbers rather than enhances the original building, the place would be small in size and not costly to heat and maintain.”

Pierpont also cited an earlier document, the state’s nomination of the observatory for the National Register, stating in part:

Pierpont’s formal request for regents’ approval of the razing, which was granted unanimously, states: "The 1908 addition has reached a state of deterioration where it is no longer economically feasible to renovate it, it is too dangerous to consider for operations, is subject to vandalism, is a fire hazard, and should be demolished . . . The cost of demolition, including clearing the site and restoring the east connecting wall of the 1854 Observatory is $85,000. The 1854 structure will remain.”

Pierpont specified that after the 1908 addition is razed, the site will be landscaped and “will not be used for any other purpose."

Razing is planned this summer, after bids are received.

An objection was voiced during the regents’ “public comments" session Thursday. Ethel Lewis of the city Planning Commission said:

“I realize that as an autonomous state body you are not subject to local environmental and historic ordinances, nor to the public hearing and review processes of the city, and may make what decisions you like about University buildings and property ... In the 1940s the first demolition of an Observatory wing was protested only by students ... I daresay the wing you now wish to remove may have fallen into neglect. Is that a sufficient reason to heap further indignities on this beautiful old building which we all. town and gown alike, see and enjoy?”

Razing of Waterman/Barbour gyms is not expected until next year.

The site, at North University and East University avenues, has long been tentatively designated as an eventual location for a new U-M chemistry department building. But that is not related to the demolition's timing, which is linked to two projects regents also approved Friday:

— A $500,000 project to build a three-story addition to the new Central Campus Recreation Building on Forest Ave., to house the U-M dance department. That department now occupies Waterman/Barbour.

— A $650,000 project for providing classrooms and administrative facilities in existing but unfinished portions of the same Recreation Building for use by the U-M Physical Education Program. That program is in scattered locations, including Waterman/Barbour.

Pierpont told regents the gyms cost up to $105,000 yearly to operate, and said this amount will be saved by razing them. Renovations to keep the gyms usable. including new electrical systems and a new roof, would cost somewhat over $1 million, he added. Demolition is expected to cost $85,000.

In addition, the regents approved spending $350,000 for renovating five shower rooms, four restrooms, and electrical and ventilating improvements, in the 48-year-old Intramural Sports Building at St. State and Hoover. Completion is expected by the 1976 fall term.

The gym razing. Recreation Building and Intramural Sports Building projects were approved in a single 7-1 vote of the regents. Regent Paul Brown, D-Petoskey, voted "no,” stating later he approves all but the gym razing. He said he is not persuaded that spending $1 million for renovation would be uneconomical, adding “we couldn’t build that much new space for $1 million.”

Other regents news on Page 17.