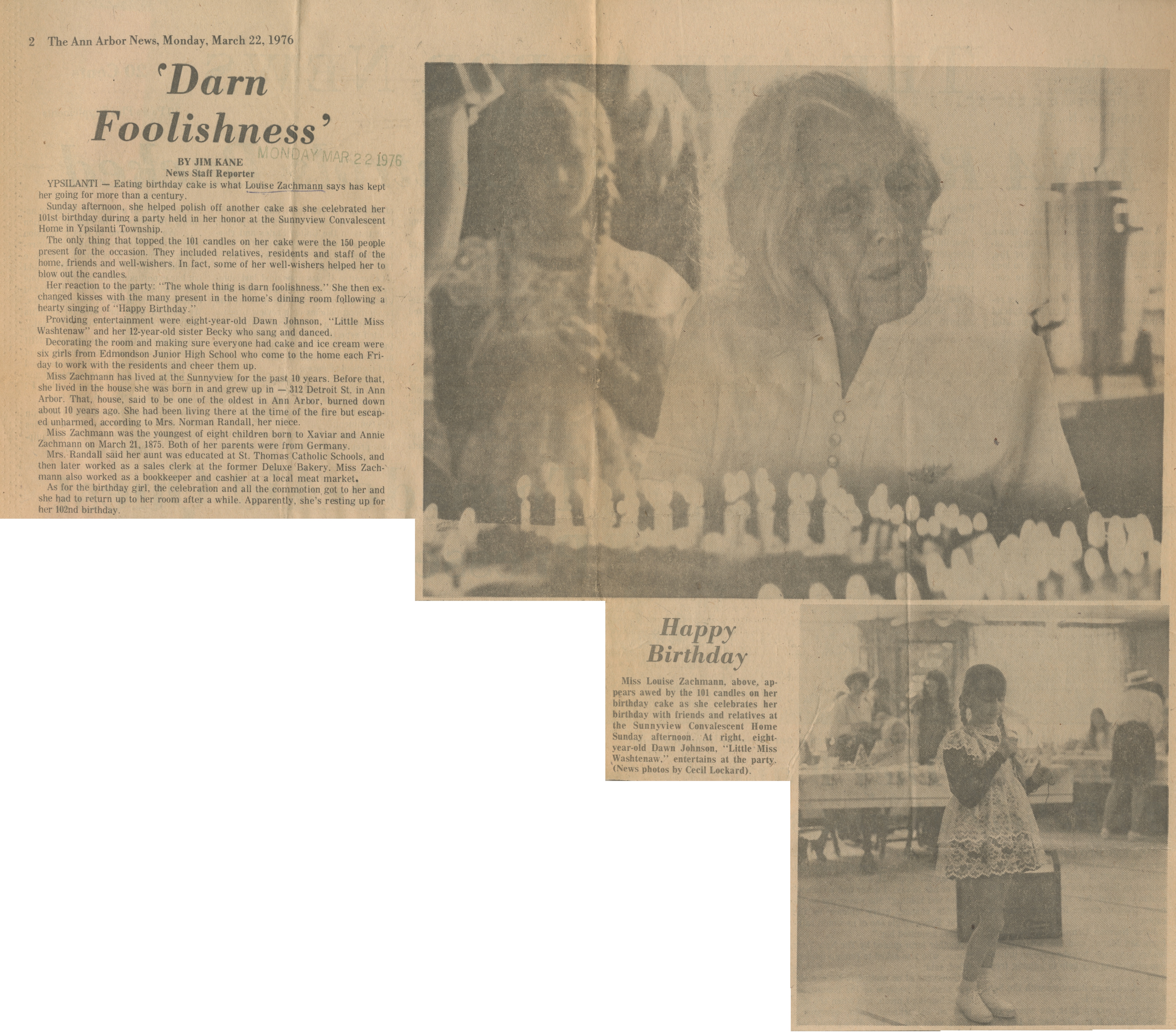 YPSILANTI — Eating birthday cake is what Louise Zachmann says has kept her going For more than a century.

Sunday afternoon, she helped polish off another cake as she celebrated her 101st birthday during a party held in her honor at the Sunnyview Convalescent Home in Ypsilanti Township.

The only thing that topped the 101 candles on her cake were the 150 people present for the occasion. They included relatives, residents and staff of the home, friends and well-wishers. In fact, some of her well-wishers helped her to blow out the candles.

Her reaction to the party: "The whole thing is darn foolishness." She then exchanged kisses with the many present in the home's dining room following a hearty singing of "Happy Birthday."

Decorating the room and making sure everyone had cake and ice cream were six girls from Edmondson Junior High School who come to the home each Friday to work with the residents and cheer them up.

Miss Zachmann has lived at the Sunnyview for the past 10 years. Before that, she lived in the house she was born in and grew up in — 312 Detroit St. in Ann Arbor. That, house, said to be one of the oldest in Ann Arbor, burned down about 10 years ago. She had been living there at the time of the fire but escaped unharmed, according to Mrs. Norman Randall, her niece.

Miss Zachmann was the youngest of eight children born to Xaviar and Annie Zachmann on March 21. 1875. Both of her parents were from Germany.

Mrs. Randall said her aunt was educated at St. Thomas Catholic Schools, and then later worked as a sales clerk at the former Deluxe Bakery. Miss Zachmann also worked as a bookkeeper and cashier at a local meat market.

As for the birthday girl, the celebration and all the commotion got to her and she had to return up to her room after a while. Apparently, she’s resting up for her 102nd birthday.

Miss Louise Zachmann, above, appears awed by the 101 candles on her birthday cake as she celebrates her birthday with friends and relatives at the Sunnyview Convalescent Home Sunday afternoon.  At right, eight-year-old Dawn Johnson, "Little Miss Washtenaw," entertains at the party. (News photos by Cecil Lockard).