Concert A Farewell For Lois Owens 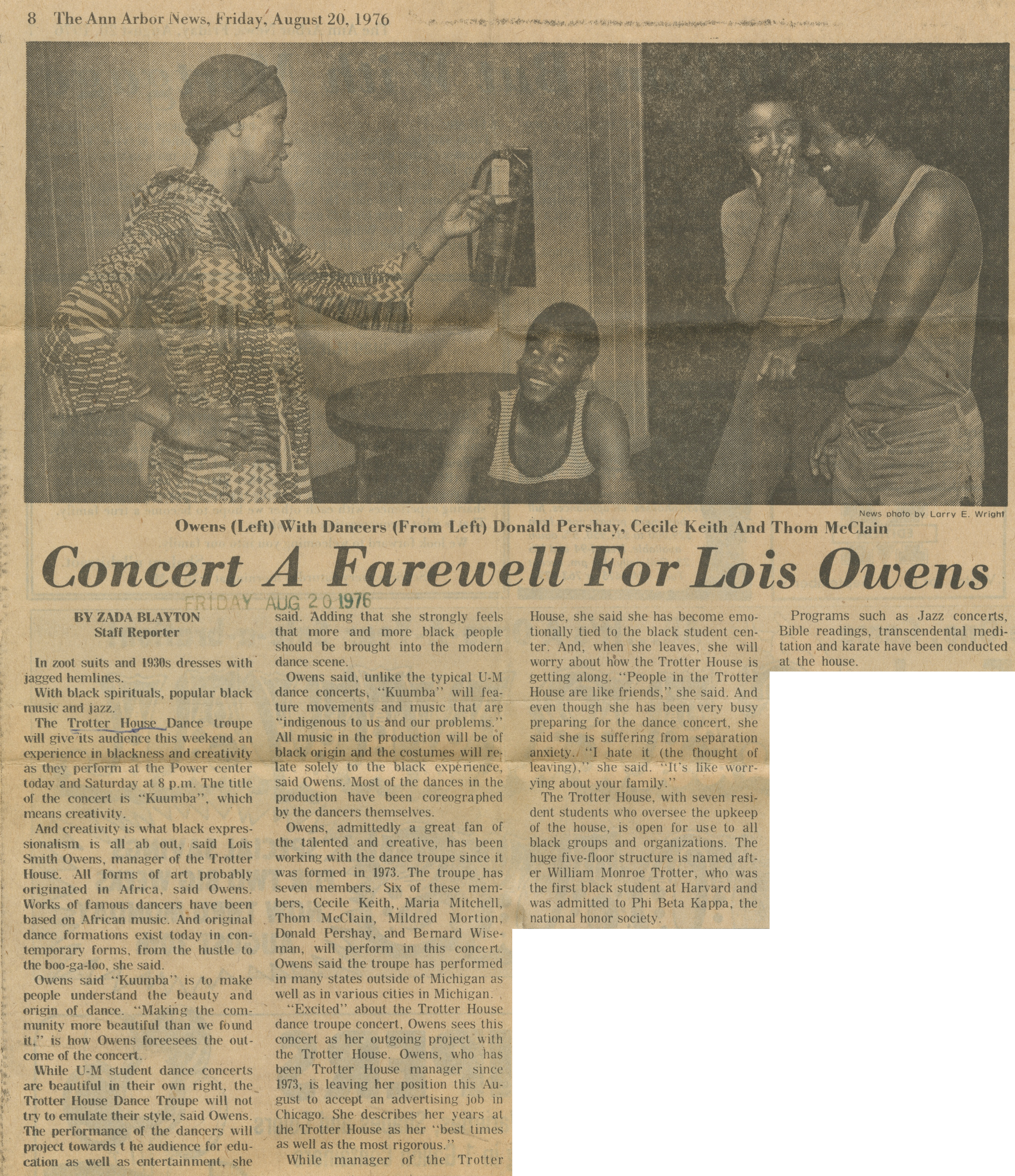 Concert A Farewell For Lois Owens

In zoot suits and 1930s dresses with jagged hemlines.

The Trotter House Dance troupe will give its audience this weekend an experience in blackness and creativity as they perform at the Power center today and Saturday at 8 p.m. The title of the concert is “Kuumba”, which means creativity.

And creativity is what black expressionalism is all about, said Lois Smith Owens, manager of the Trotter House. All forms of art probably originated in Africa, said Owens. Works of famous dancers have been based on African music. And original dance formations exist today in contemporary forms, from the hustle to the boo-ga-loo, she said.

Owens said “Kuumba" is to make people understand the beauty and origin of dance. "Making the community more beautiful than we found it." is how Owens foresees the outcome of the concert.

While U-M student dance concerts are beautiful in their own right, the Trotter House Dance Troupe will not try to emulate their style, said Owens. The performance of the dancers will project towards the audience for education as well as entertainment, she said. Adding that she strongly feels that more and more black people should be brought into the modern dance scene.

Owens said, unlike the typical U-M dance concerts, “Kuumba" will feature movements and music that are "indigenous to us and our problems.” All music in the production will be of black origin and the costumes will relate solely to the black experience, said Owens. Most of the dances in the production have been choreographed by the dancers themselves.

Owens, admittedly a great fan of the talented and creative, has been working with the dance troupe since it was formed in 1973. The troupe has seven members. Six of these members, Cecile Keith, Maria Mitchell, Thom McClain, Mildred Mortion, Donald Pershay, and Bernard Wiseman, will perform in this concert. Owens said the troupe has performed in many states outside of Michigan as well as in various cities in Michigan.

The Trotter House, with seven resident students who oversee the upkeep of the house, is open for use to all black groups and organizations. The huge five-floor structure is named after William Monroe Trotter, who was the first black student at Harvard and was admitted to Phi Beta Kappa, the national honor society.

Programs such as Jazz concerts, Bible readings, transcendental meditation and karate have been conducted at the house.