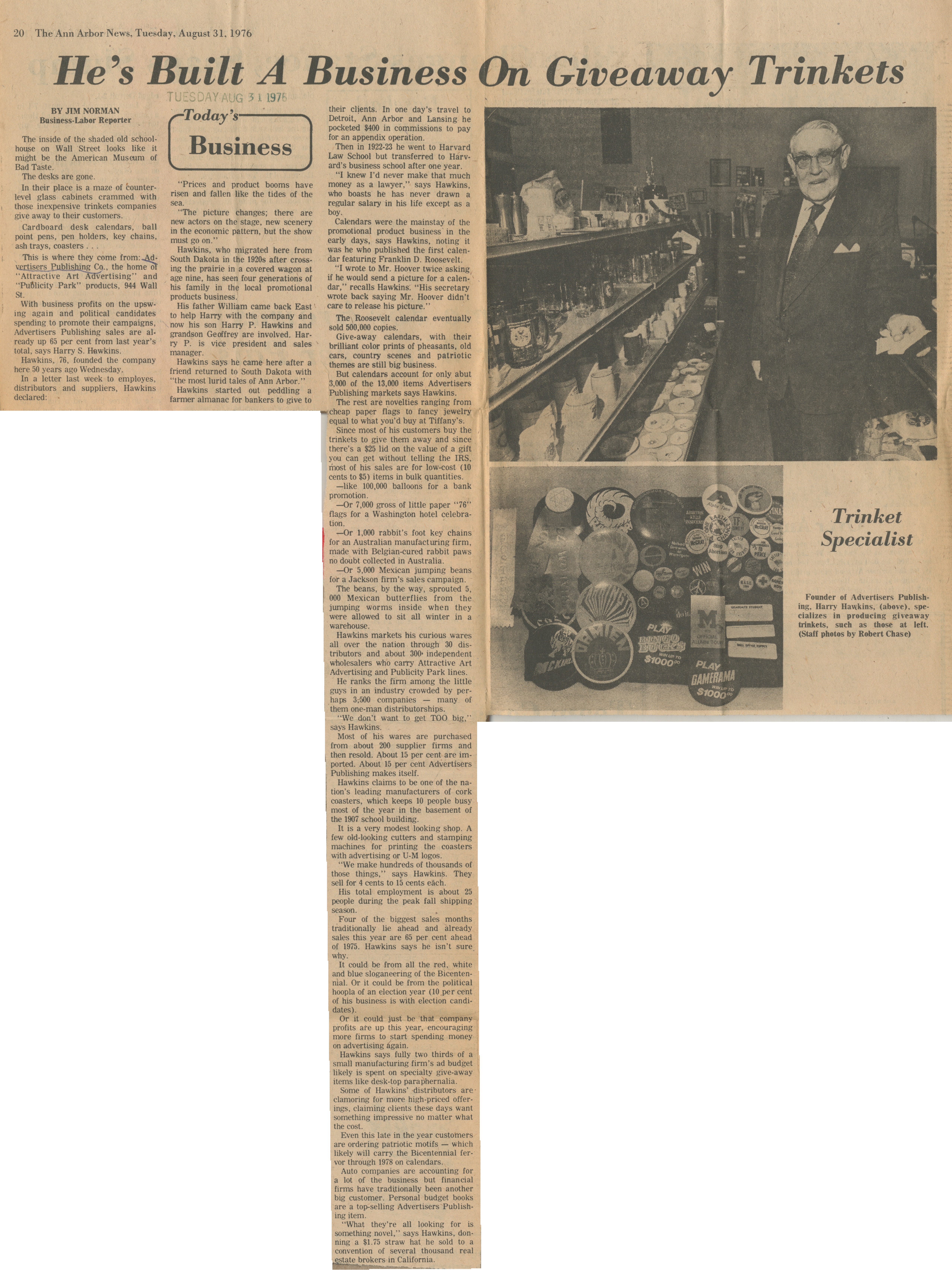 The inside of the shaded old school-house on Wall Street looks like it might be the American Museum of Bad Taste.

The desks are gone.

In their place is a maze of counter-level glass cabinets crammed with those inexpensive trinkets companies give away to their customers.

This is where they come from: Advertisers Publishing Co., the home m "Attractive Art Advertising” and "Publicity Park" products. 944 Wall St.

With business profits on the upswing again and political candidates spending to promote their campaigns, Advertisers Publishing sales are already up 65 per cent from last year’s total, says Harry S. Hawkins.

In a letter last week to employees, distributors and suppliers, Hawkins declared:

“The picture changes; there are new actors on the stage, new scenery in the economic pattern, but the show must go on.”

Hawkins, who migrated here from South Dakota in the 1920s after crossing the prairie in a covered wagon at age nine, has seen four generations of his family in the local promotional products business.

His father William came back East to help Harry with the company and now his son Harry P. Hawkins and grandson Geoffrey are involved. Harry P. is vice president and sales manager.

Hawkins says he came here after a friend returned to South Dakota with “the most lurid tales of Ann Arbor.”

Hawkins started out peddling a farmer almanac for bankers to give to
their clients. In one day’s travel to Detroit, Ann Arbor and Lansing he pocketed $400 in commissions to pay for an appendix operation.

Then in 1922-23 he went to Harvard Law School but transferred to Harvard’s business school after one year.

"I knew I’d never make that much money as a lawyer." says Hawkins, who boasts he has never drawn a regular salary in his life except as a boy.

Calendars were the mainstay of the promotional product business in the early days, says Hawkins, noting it was he who published the first calendar featuring Franklin D. Roosevelt.

"I wrote to Mr. Hoover twice asking if he would send a picture for a calendar," recalls Hawkins. “His secretary wrote back saying Mr. Hoover didn’t care to release his picture."

But calendars account for only abut 3,000 of the 13.000 items Advertisers Publishing markets says Hawkins.

The rest are novelties ranging from cheap paper flags to fancy jewelry equal to what you'd buy at Tiffany's.

Since most of his customers buy the trinkets to give them away and since there’s a $25 lid on the value of a gift you can get without telling the IRS, most of his sales are for low-cost (10 cents to $5) items in bulk quantities.

—Or 7,000 gross of little paper “76" flags for a Washington hotel celebration.

—Or 1,000 rabbit's foot key chains for an Australian manufacturing firm, made with Belgian-cured rabbit paws no doubt collected in Australia.

—Or 5,000 Mexican jumping beans for a Jackson firm's sales campaign.

The beans, by the way, sprouted 5, 000 Mexican butterflies from the jumping worms inside when they were allowed to sit all winter in a warehouse.

Hawkins markets his curious wares all over the nation through 30 distributors and about 300 independent wholesalers who carry Attractive Art Advertising and Publicity Park lines.

He ranks the firm among the little guys in an industry crowded by perhaps 3,500 companies — many of them one-man distributorships.

"We don't want to get TOO big," says Hawkins.

Hawkins claims to be one of the nation's leading manufacturers of cork coasters, which keeps 10 people busy most of the year in the basement of the 1907 school building.

It is a very modest looking shop. A few old-looking cutters and stamping machines for printing the coasters with advertising or U-M logos.

“We make hundreds of thousands of those things,” says Hawkins. They sell for 4 cents to 15 cents each.

His total employment is about 25 people during the peak fall shipping season.

Four of the biggest sales months traditionally lie ahead and already sales this year are 65 per cent ahead of 1975. Hawkins says he isn't sure why.

It could be from all the red, white and blue sloganeering of the Bicentennial. Or it could be from the political hoopla of an election year (10 percent of his business is with election candidates).

Or it could just be that company profits are up this year, encouraging more firms to start spending money on advertising again.

Some of Hawkins' distributors are clamoring for more high-priced offerings. claiming clients these days want something impressive no matter what the cost.

Even this late in the year customers are ordering patriotic motifs — which likely will carry the Bicentennial fervor through 1978 on calendars.

Auto companies are accounting for a lot of the business but financial firms have traditionally been another big customer. Personal budget books are a top-selling Advertisers Publishing item.

"What they're all looking for is something novel," says Hawkins, donning a $1.75 straw hat he sold to a convention of several thousand real estate brokers in California.

Founder of Advertisers Publishing, Harry Hawkins, (above), specializes in producing giveaway trinkets, such as those at left. (Staff photos by Robert Chase)