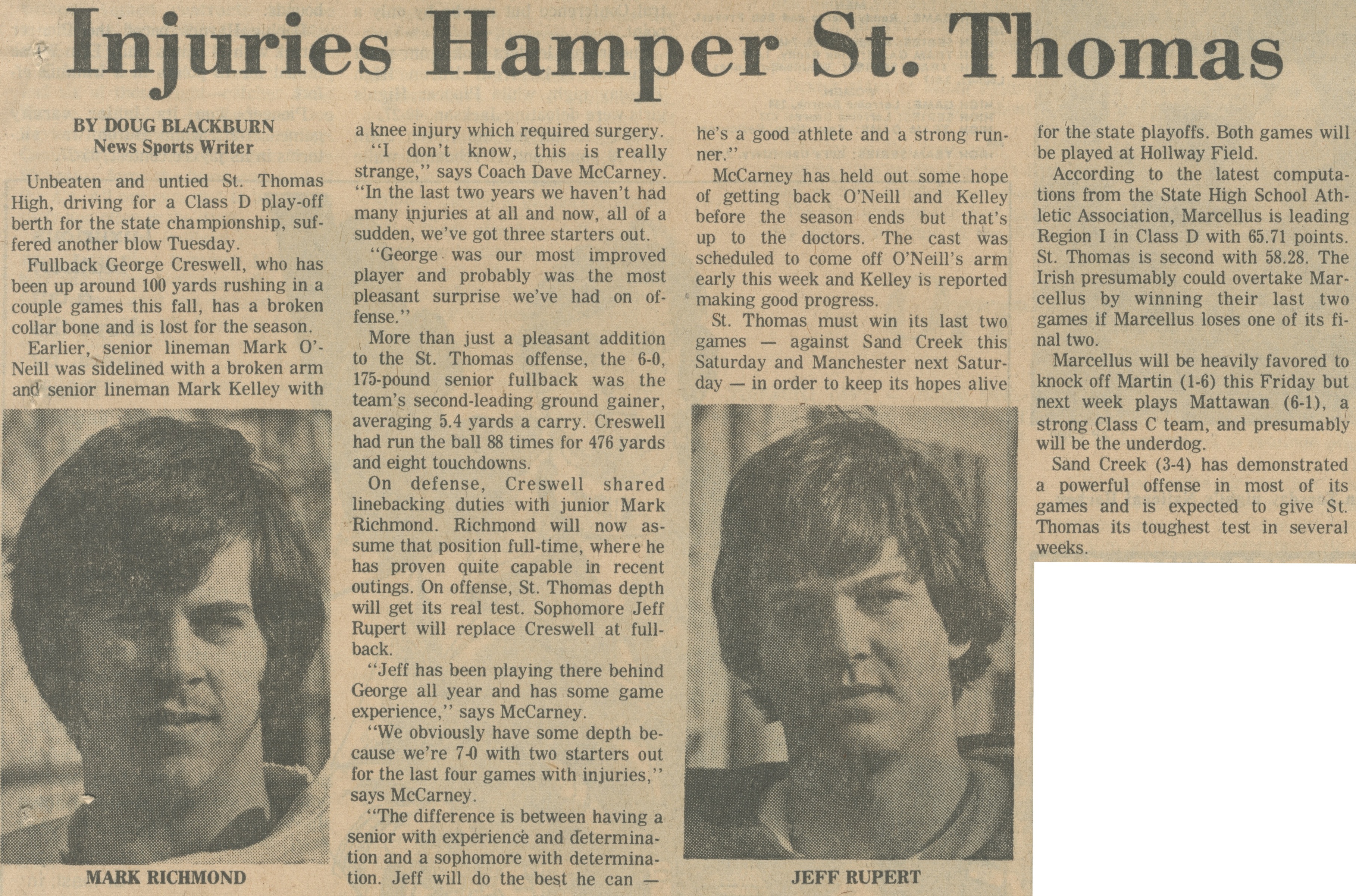 Fullback George Creswell, who has been up around 100 yards rushing in a couple games this fall, has a broken collar bone and is lost for the season.

“I don’t know, this is really strange,” says Coach Dave McCarney. "In the last two years we haven’t had many injuries at all and now, all of a sudden, we've got three starters out.

"George was our most improved player and probably was the most pleasant surprise we’ve had on offense.”

More than just a pleasant addition to the St. Thomas offense, the 6-0, 175-pound senior fullback was the team’s second-leading ground gainer, averaging 5.4 yards a carry. Creswell had run the ball 88 times for 476 yards and eight touchdowns.

On defense, Creswell shared linebacking duties with junior Mark Richmond. Richmond will now assume that position full-time, where he has proven quite capable in recent outings. On offense, St. Thomas depth will get its real test. Sophomore Jeff Rupert will replace Creswell at fullback.

“Jeff has been playing there behind George all year and has some game experience,” says McCarney.

“We obviously have some depth because we’re 7-0 with two starters out for the last four games with injuries,” says McCarney.

“The difference is between having a senior with experience and determination and a sophomore with determination. Jeff will do the best he can — he’s a good athlete and a strong runner.”

McCarney has held out some hope of getting back O'Neill and Kelley before the season ends but that’s up to the doctors. The cast was scheduled to come off O’Neill’s arm early this week and Kelley is reported making good progress.

St. Thomas must win its last two games — against Sand Creek this Saturday and Manchester next Saturday — in order to keep its hopes alive for the state playoffs. Both games will be played at Hollway Field.

According to the latest computations from the State High School Athletic Association, Marcellus is leading Region I in Class D with 65.71 points. St. Thomas is second with 58.28. The Irish presumably could overtake Marcellus by winning their last two games if Marcellus loses one of its final two.

Marcellus will be heavily favored to knock off Martin (1-6) this Friday but next week plays Mattawan (6-1), a strong Class C team, and presumably will be the underdog.

Sand Creek (3-4) has demonstrated a powerful offense in most of its games and is expected to give St. Thomas its toughest test in several weeks.