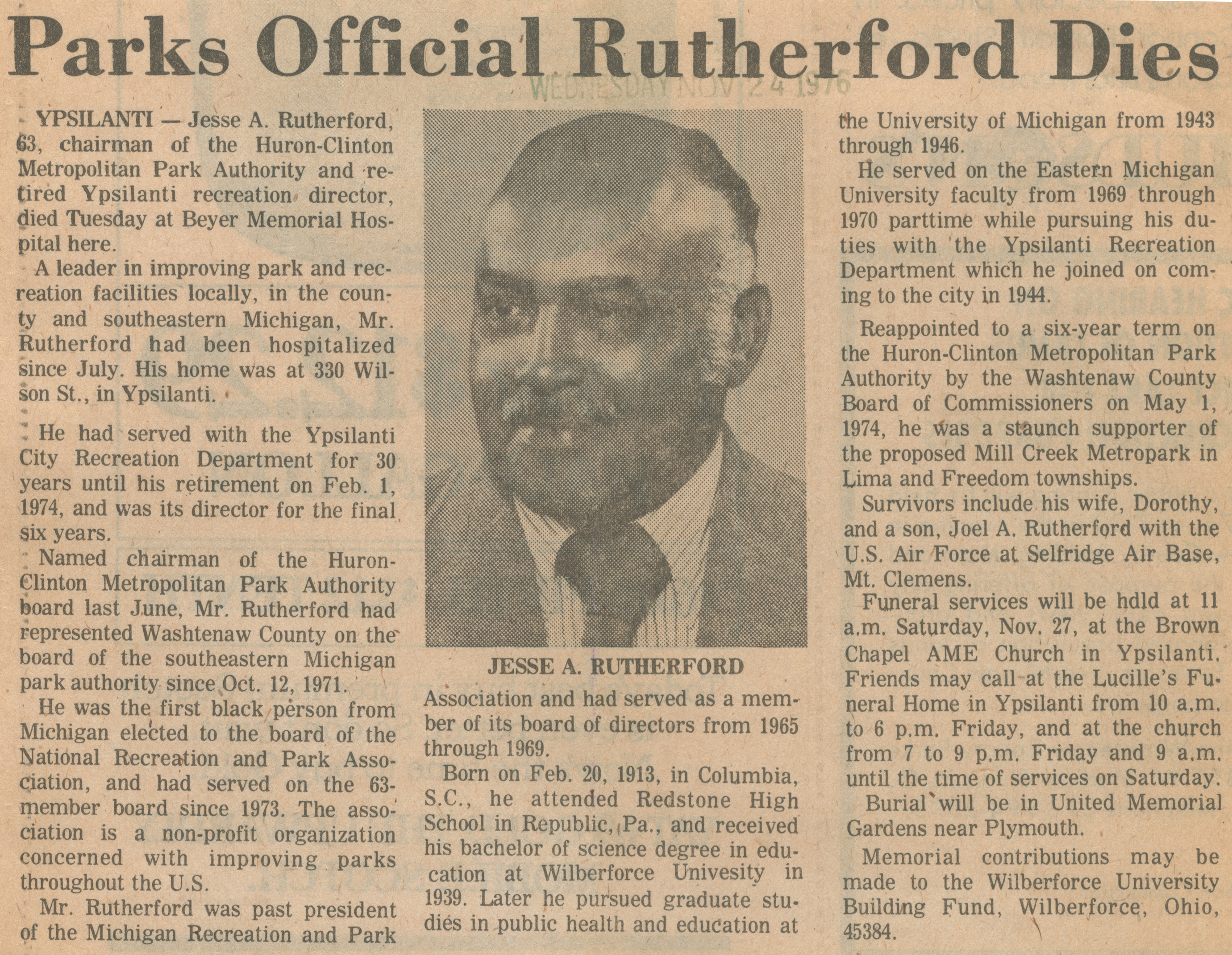 A leader in improving park and recreation facilities locally, in the county and southeastern Michigan, Mr. Rutherford had been hospitalized since July. His home was at 330 Wilson St., in Ypsilanti.

He had served with the Ypsilanti City Recreation Department for 30 years until his retirement on Feb. 1, 1974, and was its director for the final six years.

Named chairman of the Huron-Clinton Metropolitan Park Authority board last June, Mr. Rutherford had represented Washtenaw County on the board of the southeastern Michigan park authority since Oct. 12, 1971.

He was the first black person from Michigan elected to the board of the National Recreation and Park Association, and had served on the 63-member board since 1973. The association is a non-profit organization concerned with improving parks throughout the U.S.

Mr. Rutherford was past president of the Michigan Recreation and Park Association and had served as a member of its board of directors from 1965 through 1969.

Born on Feb. 20, 1913, in Columbia, S.C., he attended Redstone High School in Republic, Pa., and received his bachelor of science degree in education at Wilberforce University in 1939. Later he pursued graduate studies in public health and education at the University of Michigan from 1943 through 1946.

He served on the Eastern Michigan University faculty from 1969 through 1970 parttime while pursuing his duties with the Ypsilanti Recreation Department which he joined on coming to the city in 1944.

Reappointed to a six-year term on the Huron-Clinton Metropolitan Park Authority by the Washtenaw County Board of Commissioners on May 1, 1974, he was a staunch supporter of the proposed Mill Creek Metropark in Lima and Freedom townships.

Survivors include his wife, Dorothy, and a son, Joel A. Rutherford with the U.S. Air Force at Selfridge Air Base, Mt. Clemens.

Funeral services will be held at 11 a.m. Saturday, Nov. 27, at the Brown Chapel AME Church in Ypsilanti. Friends may call at the Lucille’s Funeral Home in Ypsilanti from 10 a.m. to 6 p.m. Friday, and at the church from 7 to 9 p.m. Friday and 9 a.m. until the time of services on Saturday.

Burial will be in United Memorial Gardens near Plymouth.

Memorial contributions may be made to the Wilberforce University Building Fund, Wilberforce, Ohio, 45384.