A Naturalist's Journal: Let's Have A Little History Lesson 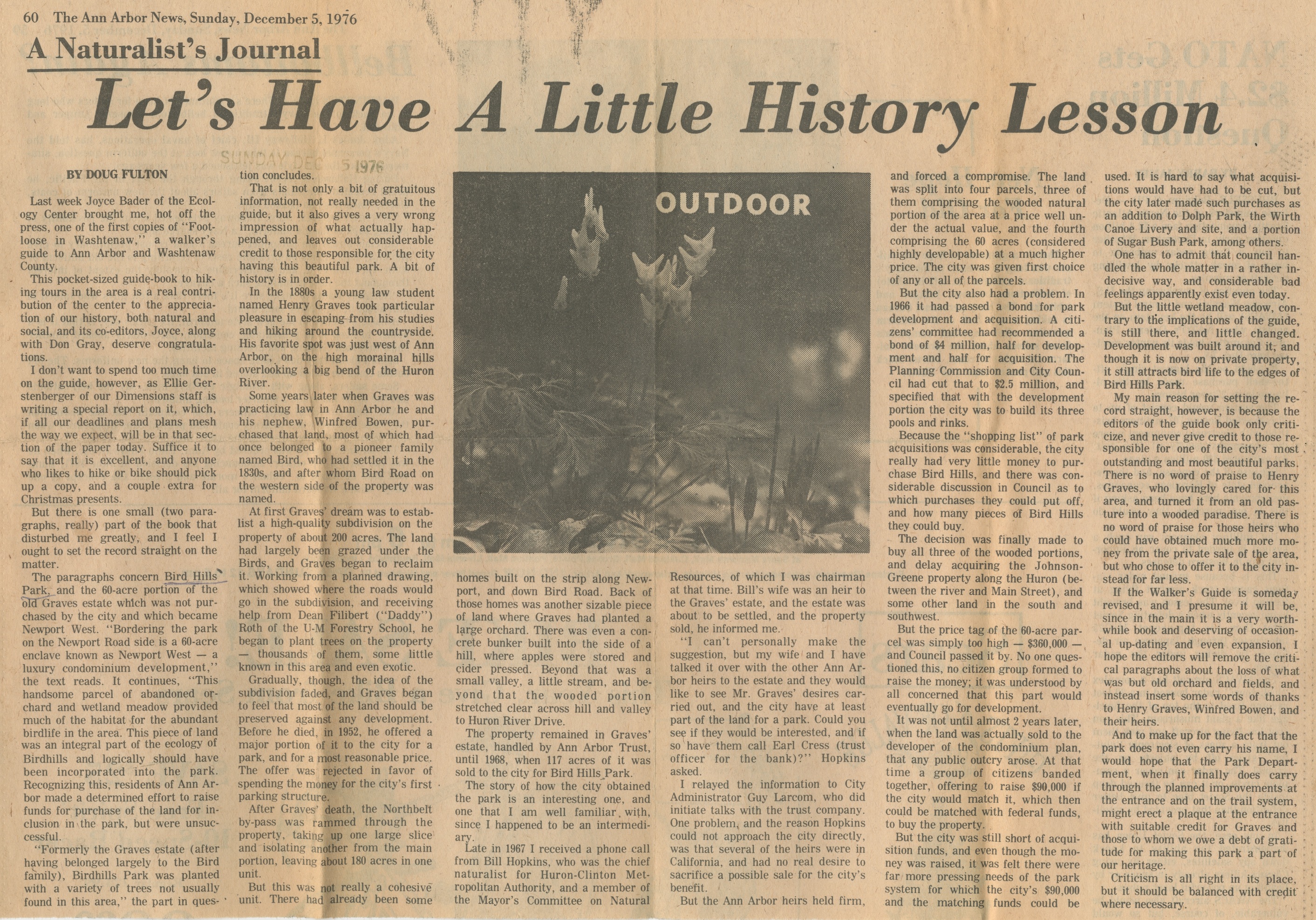 Let's Have a Little History Lesson

Last week Joyce Bader of the Ecology Center brought me, hot off the press, one of the first copies of "Footloose in Washtenaw," a walker's guide to Ann Arbor and Washtenaw County.

This pocket-sized guide-book to hiking tours in the area is a real contribution of the center to the appreciation of our history, both natural and social, and its co-editors, Joyce, along with Don Gray, deserve congratulations.

I don't want to spend too much time on the guide, however, as Ellie Gerstenberger of our Dimensions staff is writing a special report on it, which, if all our deadlines and plans mesh the way we expect, will be in that section of the paper today. Suffice it to say that it is excellent, and anyone who likes to hike or bike should pick up a copy, and a couple extra for Christmas presents.

But there is one small (two paragraphs, really) part of the book that disturbed me greatly, and I feel I ought to set the record straight on the matter.

The paragraphs concern Bird Hills Park, and the 60-acre portion of the old Graves estate which was not purchased by the city and which became Newport West. "Bordering the park on the Newport Road side is a 60-acre enclave known as Newport West - a luxury condominium development," the text reads. It continues, "This handsome parcel of abandoned orchard and wetland meadow provided much of the habitat for the abundant birdlife in the area. This piece of land was an integral part of the ecology of Birdhills and logically should have been incorporated into the park. Recognizing this, residents of Ann Arbor made a determined effort to raise funds for purchase of the land for inclusion in the park, but were unsuccessful.

"Formerly the Graves estate (after having belonged largely to the Bird family), Birdhills Park was planted with a variety of trees not usually found in this area," the part in question concludes.

That is not only a bit of gratuitous information, not really needed in the guide, but it also gives a very wrong impression of what actually happened, and leaves out considerable credit to those responsible for the city having this beautiful park. A bit of history is in order.

In the 1880s a young law student named Henry Graves took particular pleasure in escaping from his studies and hiking around the countryside. His favorite spot was just west of Ann Arbor, on the high morainal hills overlooking a big bend of the Huron River.

Some years later when Graves was practicing law in Ann Arbor he and his nephew, Winfred Bowen, purchased that land, most of which had once belonged to a pioneer family named Bird, who had settled it in the 1830s, and after whom Bird Road on the western side of the property was named.

At first Graves' dream was to establish a high-quality subdivision on the property of about 200 acres. The land had largely been grazed under the Birds, and Graves began to reclaim it. Working from a planned drawing, which showed where the roads would go in the subdivision, and receiving help from Dean Filibert ("Daddy") Roth of the U-M Forestry School, he began to plant trees on the property - thousands of them, some little known in this area and even exotic.

Gradually, though, the idea of the subdivision faded, and Graves began to feel that most of the land should be preserved against any development. Before he died, in 1952, he offered a major portion of it to the city for a park, and for a most reasonable price. The offer was rejected in favor of spending the money on the city's first parking structure.

After Graves' death, the Northbelt by-pass was rammed through the property, taking up one large slice and isolating another from the main portion, leaving about 180 acres in one unit.

But this was not really a cohesive unit. There had already been some homes built on the strip along Newport, and down Bird Road. Back of those homes was another sizable piece of land where Graves had planted a large orchard. There was even a concrete bunker built into the side of a hill, where apples were stored and cider pressed. Beyond that was a small valley, a little stream, and beyond that the wooded portion stretched clear across hill and valley to Huron River Drive.

The property remained in Graves' estate, handled by Ann Arbor Trust, until 1968, when 117 acres of it was sold to the city for Bird Hills Park.

The story of how the city obtained the park is an interesting one, and one I am well familiar with, since I happened to be an intermediary.

Late in 1967 I received a phone call from Bill Hopkins, who was the chief naturalist for Huron-Clinton Metropolitan Authority, and a member of the Mayor's Committee on Natural Resources, of which I was chairman at the time, Bill's wife was an heir to the Graves' estate, and the estate was about to be settled, and the property sold, he informed me.

"I can't personally make the suggestion, but my wife and I have talked it over with the other Ann Arbor heirs to the estate and they would like to see Mr. Graves' desires carried out, and the city have at least part of the land for a park. Could you see if they would be interested, and if so have them call Earl Cress (trust officer for the bank)?"  Hopkins asked.

I relayed the information to City Administrator Guy Larcom, who did initiate talks with the trust company. One problem, and the reason Hopkins could not approach the city directly, was that several of the heirs were in California, and had no real desire to sacrifice a possible sale for the city's benefit.

But the Ann Arbor heirs held firm, and forced a compromise. The land was split into four parcels, three of them compromising the wooded natural portion of the area at a price well under the actual value, and the fourth comprising the 60 acres (considered highly developable) at a much higher price.

The decision was finally made to buy all three of the wooded portions, and delay acquiring the Johnson-Greene property along the Huron (between the river and Main Street), and some other land in the south and southwest.

But the price tag of the 60-acre parcel was simply too high- $360,000 - and Council passed it by. No one questioned this, no citizen group formed to raise the money; it was understood by all concerned that this part would eventually go for development.

It was not until almost 2 years later, when the land was actually sold to the developer of the condominium plan, that any public outcry arose. At that time a grouop of citizens banded together, offering to raise $90,000 if the city would match it, which then could be matched with federal funds, to buy the property.

But the city was still short of acquisition funds, and even though the money was raised, it was felt there were far more pressing needs of the park system for which the city's $90,000 and the matching funds could be used. It is hard to say what acquisitions would have had to be cut, but the city later made such purchases as an addition to Dolph Park, the Wirth Canoe Livery and site, and a portion of Sugar Bush Park, among others.

One has to admit that council handled the whole matter in a rather indecisive way, and considerable bad feelings apparently exist even today.

But the little wetland meadow, contrary to the implications of the guide, is still there, and little changed. Development was built around it, and through it is now on private property, it still attracts bird life to the edges of Bird Hills Park.

My main reason for setting the record straight, however, is because the editors of the guide book only criticize, and never give credit to those responsible for one of the city's most outstanding and most beautiful parks. There is no word of praise to Henry Graves, who lovingly cared for this area, and turned it from an old pasture into a wooded paradise. There is no word of praise for those heirs who could have obtained much more money from the private sale of the area, but who chose to offer it to the city instead for far less.

If the Walker's Guide is someday revised, and I presume it will be, since in the main it is a very worthwhile book and deserving of occasional up-dating and even expansion, I hope the editors will remove the critical paragraphs about the loss of what was but old orchard and fields, and instead insert some words of thanks to Henry Graves, Winfred Bowen, and their heirs.

And to make up for the fact that the park does not even carry his name, I would hope that the Park Department, when it finally does carry through the planned improvements at the entrance and on the trail system, might erect a plaque at the entrance with suitable credit for Graves and those to whom we owe a debt of gratitude for making this park a part of our heritage.

Criticism is all right in its place, but it should be balanced with credit where necessary.