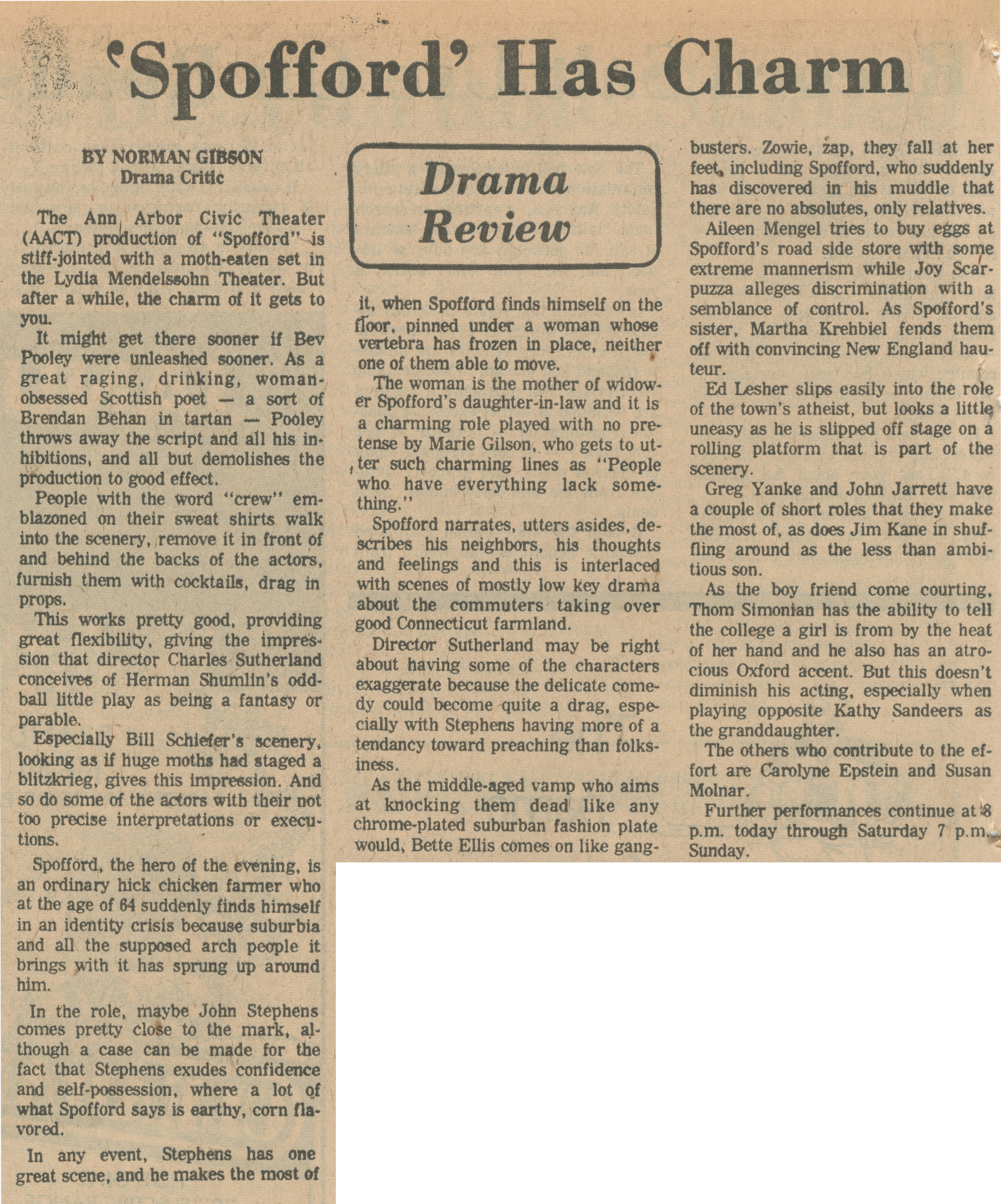 The Ann Arbor Civic Theater (AACT) production of “Spofford" is stiff-jointed with a moth-eaten set in the Lydia Mendelssohn Theater. But after a while, the charm of it gets to you.

It might get there sooner if Bev Pooley were unleashed sooner. As a great raging, drinking, woman-obsessed Scottish poet — a sort of Brendan Behan in tartan — Pooley throws away the script and all his inhibitions, and all but demolishes the production to good effect.

People with the word “crew” emblazoned on their sweat shirts walk into the scenery, remove it in front of and behind the backs of the actors, furnish them with cocktails, drag in props.

Especially Bill Schiefer's scenery, looking as if huge moths had staged a blitzkrieg, gives this impression. And so do some of the actors with their not too precise interpretations or executions.

Spofford, the hero of the evening, is an ordinary hick chicken farmer who at the age of 64 suddenly finds himself in an identity crisis because suburbia and all the supposed arch people it brings with it has sprung up around him.

In the role, maybe John Stephens comes pretty close to the mark, although a case can be made for the fact that Stephens exudes confidence and self-possession, where a lot of what Spofford says is earthy, corn flavored.

In any event, Stephens has one great scene, and he makes the most of it, when Spofford finds himself on the floor, pinned under a woman whose vertebra has frozen in place, neither one of them able to move.

The woman is the mother of widower Spofford’s daughter-in-law and it is a charming role played with no pretense by Marie Gilson, who gets to utter such charming lines as “People who have everything lack something."

Spofford narrates, utters asides, describes his neighbors, his thoughts and feelings and this is interlaced with scenes of mostly low key drama about the commuters taking over good Connecticut farmland.

Director Sutherland may be right about having some of the characters exaggerate because the delicate comedy could become quite a drag, especially with Stephens having more of a tendency toward preaching than folksiness.

As the middle-aged vamp who aims at knocking them dead like any chrome-plated suburban fashion plate would, Bette Ellis comes on like gangbusters. Zowie, zap, they fall at her feet, including Spofford, who suddenly has discovered in his muddle that there are no absolutes, only relatives.

Aileen Mengel tries to buy eggs at Spofford’s road side store with some extreme mannerism while Joy Scarpuzza alleges discrimination with a semblance of control. As Spofford's sister, Martha Krehbiel fends them off with convincing New England hauteur.

Ed Lesher slips easily into the role of the town’s atheist, but looks a little uneasy as he is slipped off stage on a rolling platform that is part of the scenery.

Greg Yanke and John Jarrett have a couple of short roles that they make the most of, as does Jim Kane in shuffling around as the less than ambitious son.

As the boy friend come courting, Thom Simonian has the ability to tell the college a girl is from by the heat of her hand and he also has an atrocious Oxford accent. But this doesn’t diminish his acting, especially when playing opposite Kathy Sandeers as the granddaughter.

The others who contribute to the effort are Carolyne Epstein and Susan Molnar.