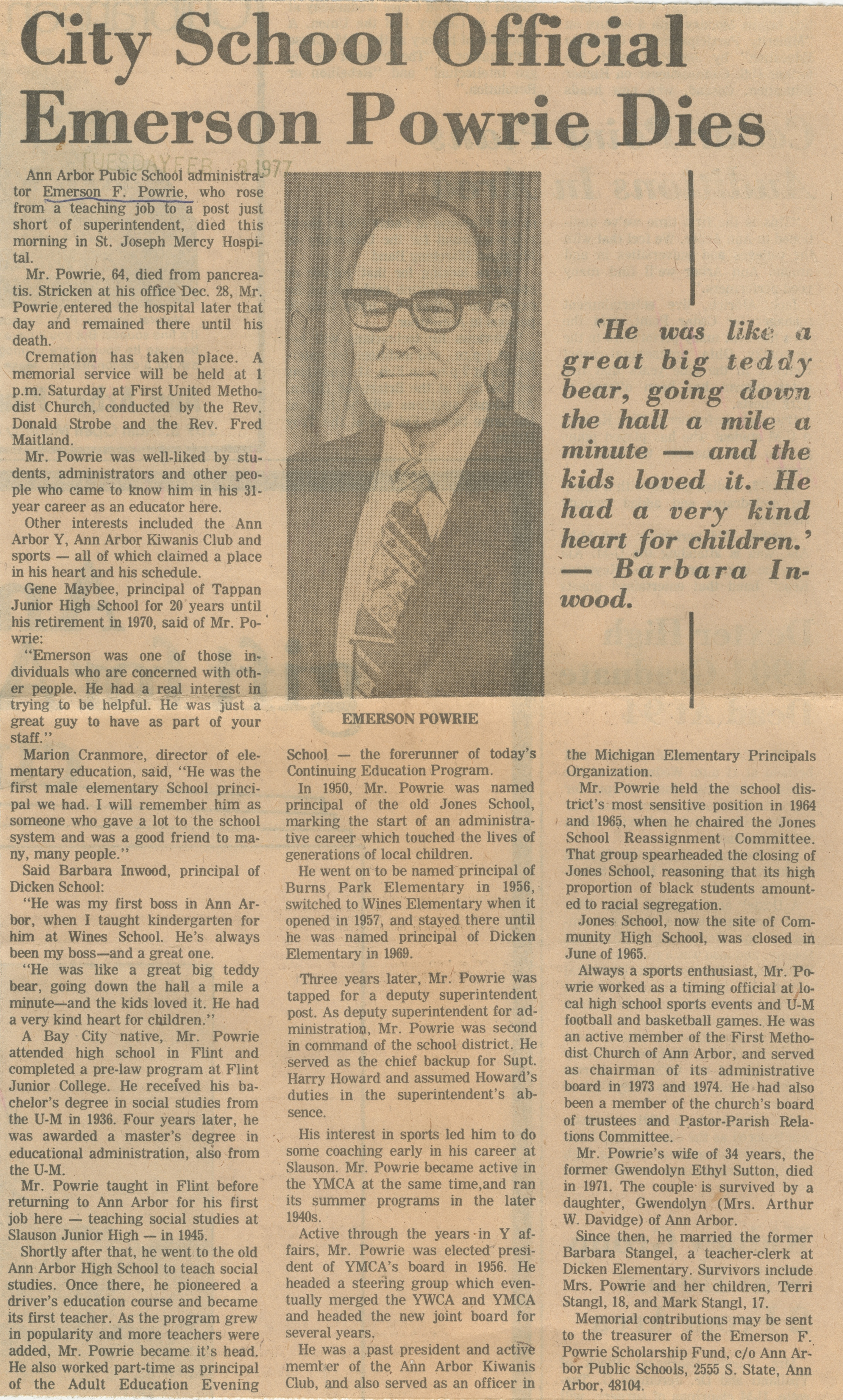 Mr. Powrie, 64, died from pancreatitis. Stricken at his office Dec. 28, Mr. Powrie entered the hospital later that day and remained there until his death.

Cremation has taken place. A memorial service will be held at 1 p m. Saturday at First United Methodist Church, conducted by the Rev. Donald Strobe and the Rev. Fred Maitland

Mr. Powrie was well-liked by students, administrators and other people who came to know him in his 31-year career as an educator here.

Other interests included the Ann Arbor Y, Ann Arbor Kiwanis Club and sports — all of which claimed a place in his heart and his schedule.

Gene Maybee, principal of Tappan Junior High School for 20 years until his retirement in 1970, said of Mr. Powrie:

“Emerson was one of those individuals who are concerned with other people. He had a real interest in trying to be helpful. He was lust a great guy to have as part of your staff.”

Marion Cranmore, director of elementary education, said, “He was the first male elementary School principal we had. I will remember him as someone who gave a lot to the school system and was a good friend to many, many people.”

“He was my first boss in Ann Arbor, when I taught kindergarten for him at Wines School. He’s always been my boss—and a great one.

“He was like a great big teddy bear, going down the hall a mile a minute—and the kids loved it. He had a very kind heart for children.”

A Bay City native, Mr. Powrie attended high school in Flint and completed a pre-law program at Flint Junior College. He received his bachelor’s degree in social studies from the U-M in 1936. Four years later, he was awarded a master’s degree in educational administration, also from the U-M.

Mr. Powrie taught in Flint before returning to Ann Arbor for his first job here — teaching social studies at Slauson Junior High — in 1945.

Shortly after that, he went to the old Ann Arbor High School to teach social studies. Once there, he pioneered a driver’s education course and became its first teacher. As the program grew in popularity and more teachers were added, Mr. Powrie became it’s head. He also worked part-time as principal of the Adult Education Evening School — the forerunner of today’s Continuing Education Program.

In 1950, Mr. Powrie was named principal of the old Jones School, marking the start of an administrative career which touched the lives of generations of local children.

His interest in sports led him to do some coaching early in his career at Slauson. Mr. Powrie became active in the YMCA at the same time, and ran its summer programs in the later 1940s.

Active through the years in Y affairs, Mr. Powrie was elected president of YMCA’s board in 1956. He headed a steering group which eventually merged the YWCA and YMCA and headed the new joint board for several years.

He was a past president and active member of the. Ann Arbor Kiwanis Club, and also served as an officer in the Michigan Elementary Principals Organization.

Mr. Powrie held the school district’s most sensitive position in 1964 and 1965, when he chaired the Jones School Reassignment Committee. That group spearheaded the closing of Jones School, reasoning that its high proportion of black students amounted to racial segregation.

Jones School, now the site of Community High School, was closed in June of 1965.

Always a sports enthusiast, Mr. Powrie worked as a timing official at local high school sports events and U-M football and basketball games. He was an active member of the First Methodist Church of Ann Arbor, and served as chairman of its administrative board in 1973 and 1974. He had also been a member of the church’s board of trustees and Pastor-Parish Relations Committee.

Since then, he married the former Barbara Stangel, a teacher-clerk at Dicken Elementary. Survivors include Mrs. Powrie and her children, Terri Stangl, 18, and Mark Stangl, 17.

'He was like a great big teddy bear, going down the hall a mile a minute -- and the kids loved it. He had a very kind heart for children.' -- Barbara Inwood.