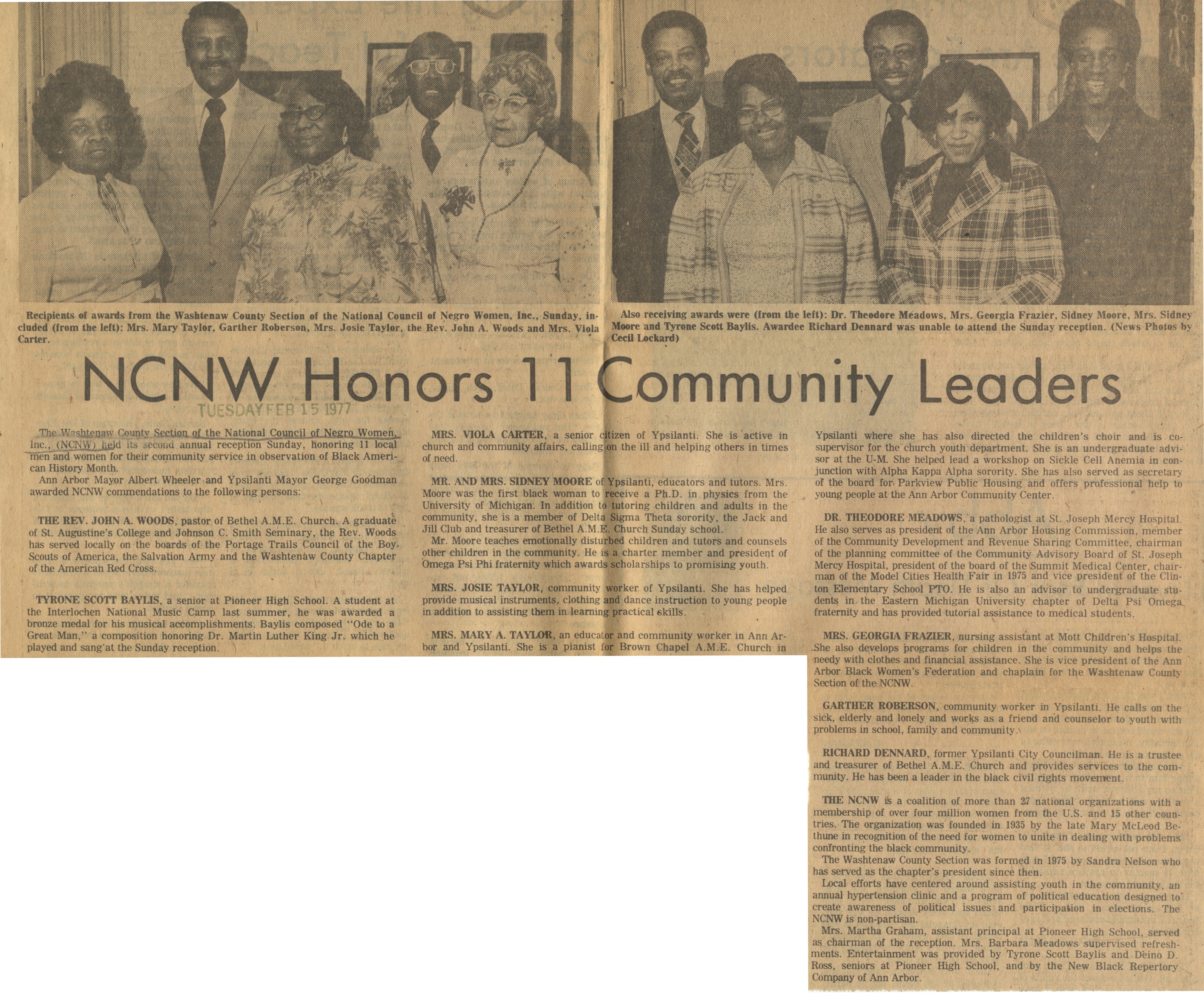 THE REV. JOHN A. WOODS, pastor of Bethel A.M.E. Church. A graduate of St. Augustine's College and Johnson C. Smith Seminary, the Rev. Woods has served locally on the boards of the Portage Trails Council, of the Boy Scouts of America, the Salvation Army and the Washtenaw County Chapter of the American Red Cross.

TYRONE SCOTT BAYLIS, a senior at Pioneer High School. A student at the Interlochen National Music Camp last summer, he was awarded a bronze medal for his musical accomplishments. Baylis composed "Ode to a Great Man," a composition honoring Dr. Martin Luther Kind Jr. which he played and sang at the Sunday reception.

MRS. VIOLA CARTER, a senior citizen of Ypsilanti. She is active in church and community affairs, calling on the ill and helping others in times of need.

MR. AND MRS. SIDNEY MOORE of Ypsilanti, educators and tutors. Mrs. Moore was the first black woman to receive a Ph.D. in physics from the University of Michigan. In addition to tutoring children and adults in the community, she is a member of Delta Sigma Theta sorority, the Jack and Jill Club and treasurer of Bethel A.M.E. Church Sunday school.

Mr. Moore teaches emotionally disturbed children and tutors and counsels other children in the community. He is a charter member and president of Omega Psi Phi fraternity which awards scholarships to promising youth.

MRS. JOSIE TAYLOR, community worker of Ypsilanti. She has helped provide musical instruments, clothing and dance instruction to young people in addition to assisting them in learning practical skills.

MRS. MARY A. TAYLOR, an educator and community worker in Ann Arbor and Ypsilanti. She is pianist for Brown Chapel A.M.E. Church in Ypsilanti where she has also directed the children's choir and is co-supervisor for the church youth department. She is an undergraduate advisor at the U-M. She helped lead a workshop on Sickle Cell Anemia in conjunction with Alpha Kappa Alpha sorority. She has also served as secretary of the board for Parkview Public Housing and offers professional help to young people at the Ann Arbor Community Center.

DR. THEODORE MEADOWS, a pathologist at St. Joseph Mercy Hospital. He also serves as president of the Ann Arbor Housing Commission, member of the Community Development and Revenue Sharing Committee, chairman of the planning committee of the Community Advisory Board of St. Joseph Mercy Hospital, president of the board of the Summit Medical Center, chairman of the Model Cities Health Fair in 1975 and vice president of the Clinton Elementary School PTO. He is also an advisor to undergraduate students in the Eastern Michigan University chapter of Delta Psi Omega fraternity and has provided tutorial assistance to medical students.

MRS. GEORGIA FRAZIER, nursing assistant at Mott Children's Hospital. She also develops programs for children in the community and helps the needy with clothes and financial assistance. She is vice president of the Ann Arbor Black Women's Federation and chaplain for the Washtenaw County Section of the NCNW.

GARTHER ROBERSON, community worker in Ypsilanti. He calls on the sick, elderly and lonely and works as a friend and counselor to youth with problems in school, family and community.

RICHARD DENNARD, former Ypsilanti City Councilman. He is a trustee and treasurer of Bethel A.M.E. Church and provides services to the community. He has been a leader in the black civil rights movement.

THE NCNW is a coalition of more than 27 national organizations with a membership of over four million women from the U.S. and 15 other countries. The organization was founded in 1935 by the late Mary McLeod Bethune in recognition of the need for women to unite in dealing with problems confronting the black community.

The Washtenaw County Section was formed in 1975 by Sandra Nelson who has served as the chapter's president since then.

Local efforts have centered around assisting youth in the community, an annual hypertension clinic and a program of political education designed to create awareness of political issues and participation in elections. The NCNW is non-partisan.