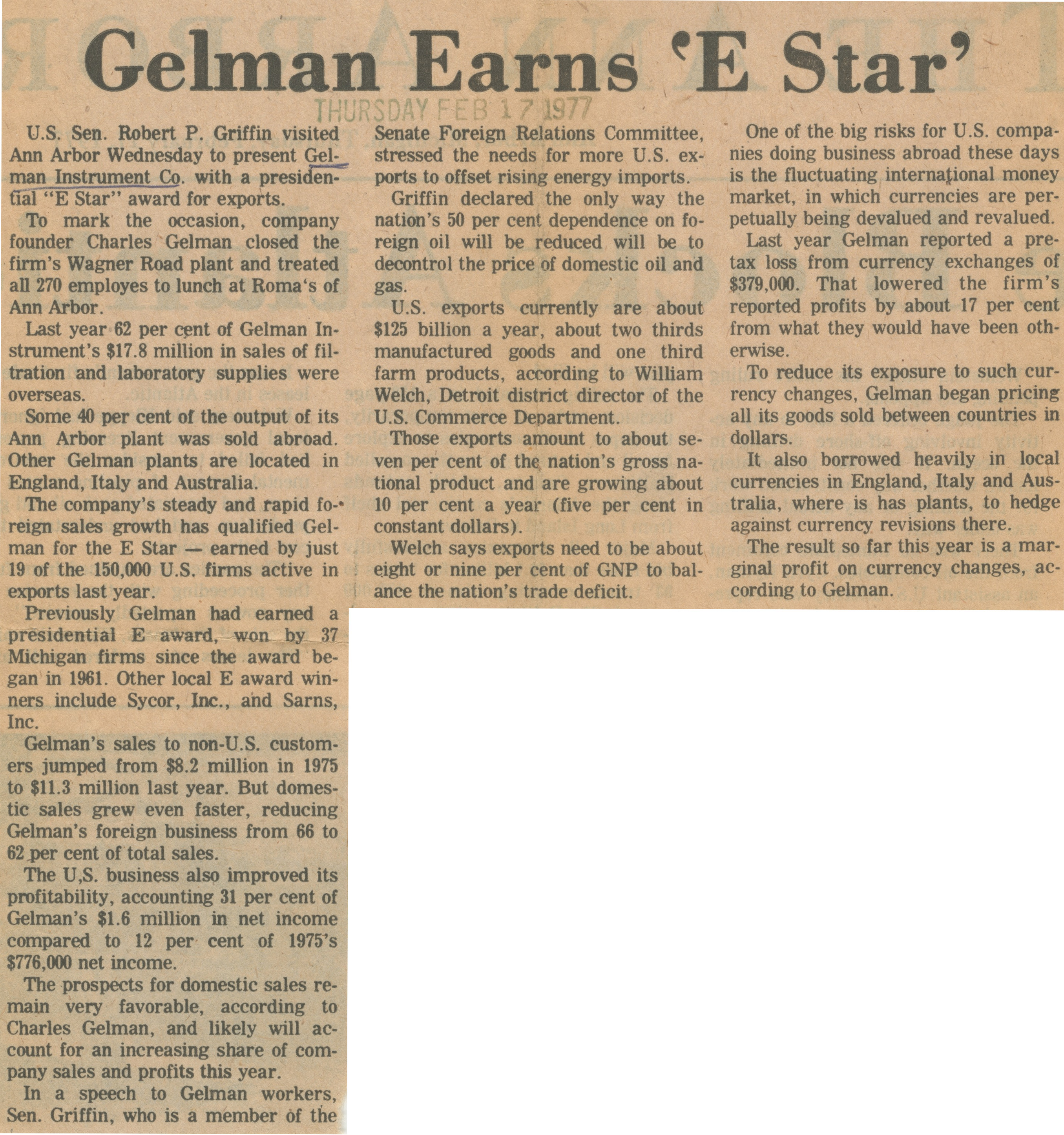 To mark the occasion, company founder Charles Gelman closed the firm’s Wagner Road plant and treated all 270 employes to lunch at Roma’s of Ann Arbor.

Last year 62 per cent of Gelman Instrument’s $17.8 million in sales of filtration and laboratory supplies were overseas.

Some 40 per cent of the output of its Ann Arbor plant was sold abroad. Other Gelman plants are located in England, Italy and Australia.

The company’s steady and rapid foreign sales growth has qualified Gelman for the E Star — earned by just 19 of the 150,000 U.S. firms active in exports last year.

Previously Gelman had earned a presidential E award, won by 37 Michigan firms since the award began in 1961. Other local E award winners include Sycor, Inc., and Sarns, Inc.

Gelman’s sales to non-U.S. customers jumped from $8.2 million in 1975 to $11.3 million last year. But domestic sales grew even faster, reducing Gelman’s foreign business from 66 to 62 per cent of total sales.

The prospects for domestic sales remain very favorable, according to Charles Gelman, and likely will account for an increasing share of company sales and profits this year.

In a speech to Gelman workers, Sen. Griffin, who is a member of the Senate Foreign Relations Committee, stressed the needs for more U.S. exports to offset rising energy imports.

Griffin declared the only way the nation’s 50 per cent dependence on foreign oil will be reduced will be to decontrol the price of domestic oil and gas.

U.S. exports currently are about $125 billion a year, about two thirds manufactured goods and one third farm products, according to William Welch, Detroit district director of the U.S. Commerce Department.

Those exports amount to about seven per cent of the nation's gross national product and are growing about 10 per cent a year (five per cent in constant dollars).

Welch says exports need to be about eight or nine per cent of GNP to balance the nation’s trade deficit.

One of the big risks for U.S. companies doing business abroad these days is the fluctuating international money market, in which currencies are perpetually being devalued and revalued.

Last year Gelman reported a pretax loss from currency exchanges of $379,000. That lowered the firm’s reported profits by about 17 per cent from what they would have been otherwise.

To reduce its exposure to such currency changes, Gelman began pricing all its goods sold between countries in dollars.

It also borrowed heavily in local currencies in England, Italy and Australia, where is has plants, to hedge against currency revisions there.

The result so far this year is a marginal profit on currency changes, according to Gelman.