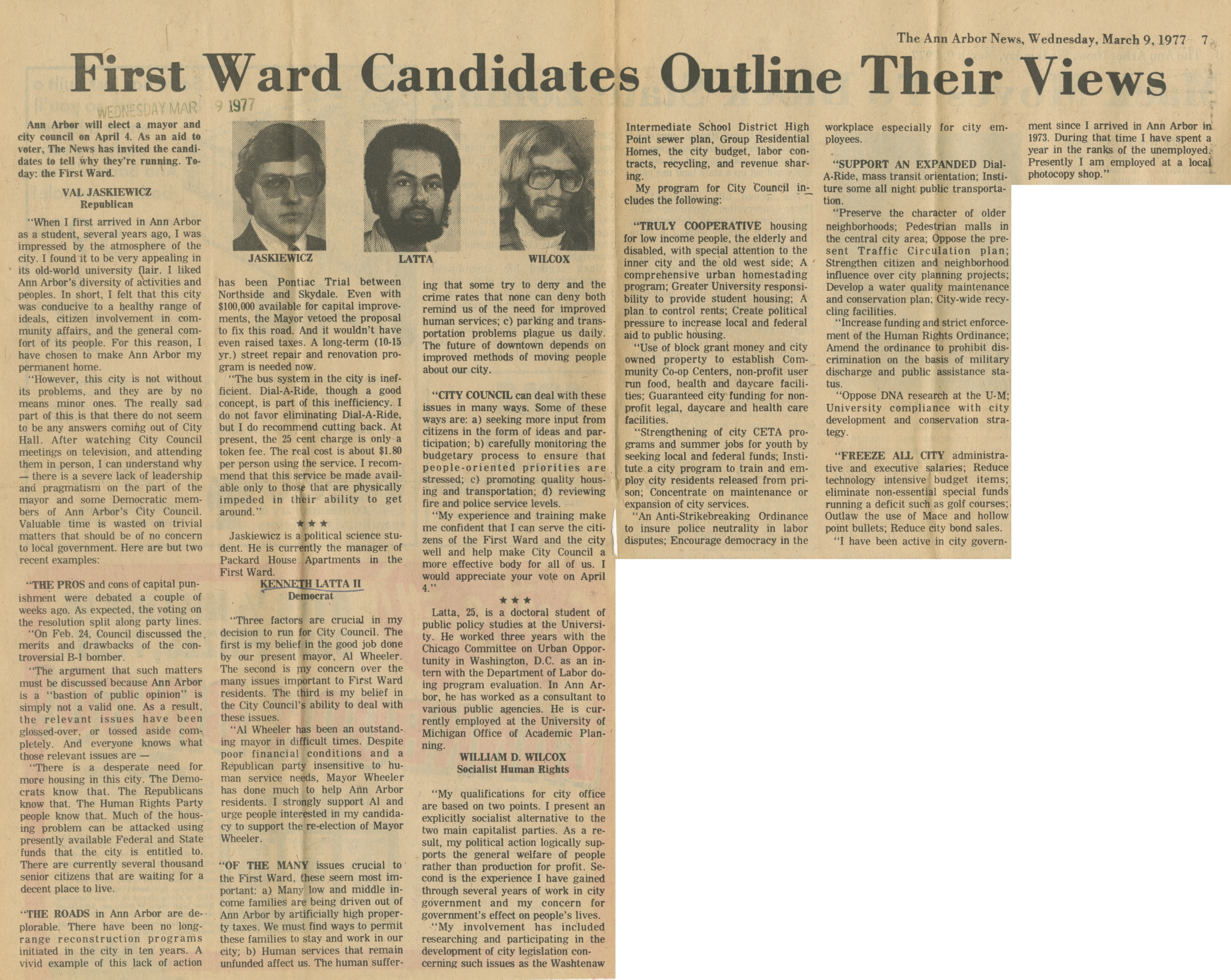 Ann Arbor will elect a mayor and city council on April 4. As an aid to voter. The News has invited the candidates to tell why they’re running. Today: the First Ward.

“When I first arrived in Ann Arbor as a student, several years ago, I was impressed by the atmosphere of the city. I found it to be very appealing in its old-world university flair. I liked Ann Arbor's diversity of activities and peoples. In short, I felt that this city was conducive to a healthy range of ideals, citizen involvement in community affairs, and the general comfort of its people. For this reason, I have chosen to make Ann Arbor my permanent home.

“However, this city is not without its problems, and they are by no means minor ones. The really sad part of this is that there do not seem to be any answers coming out of City Hall. After watching City Council meetings on television, and attending them in person, I can understand why — there is a severe lack of leadership and pragmatism on the part of the mayor and some Democratic members of Ann Arbor’s City Council. Valuable time is wasted on trivial matters that should be of no concern to local government. Here are but two recent examples:

"THE PROS and cons of capital punishment were debated a couple of weeks ago. As expected, the voting on the resolution split along party lines.

“On Feb. 24, Council discussed the. merits and drawbacks of the controversial B-1 bomber.

“The argument that such matters must be discussed because Ann Arbor is a “bastion of public opinion” is simply not a valid one. As a result, the relevant issues have been glossed-over, or tossed aside completely. And everyone knows what those relevant issues are —

“There is a desperate need for more housing in this city. The Democrats know that. The Republicans know that. The Human Rights Party people know that. Much of the housing problem can be attacked using presently available Federal and State funds that the city is entitled to. There are currently several thousand senior citizens that are waiting for a decent place to live.

"THE ROADS in Ann Arbor are deplorable. There have been no long-range reconstruction programs initiated in the city in ten years. A vivid example of this lack of action has been Pontiac Trial between Northside and Skydale. Even with $100,000 available for capital improvements, the Mayor vetoed the proposal to fix this road. And it wouldn't have even raised taxes. A long-term (10-15 yr.) street repair and renovation program is needed now.

“The bus system in the city is inefficient. Dial-A-Ride, though a good concept, is part of this inefficiency. I do not favor eliminating Dial-A-Ride, but I do recommend cutting back. At present, the 25 cent charge is only a token fee. The real cost is about $1.80 per person using the service. I recommend that this service be made available only to those that are physically impeded in their ability to get around.”

Jaskiewicz is apolitical science student. He is currently the manager of Packard House Apartments in the First Ward.

"Al Wheeler has been an outstanding mayor in difficult times. Despite poor financial conditions and a Republican party insensitive to human service needs, Mayor Wheeler has done much to help Ann Arbor residents. I strongly support Al and urge people interested in my candidacy to support the re-election of Mayor Wheeler.

"OF THE MANY issues crucial to the First Ward, these seem most important: a) Many low and middle income families are being driven out of Ann Arbor by artificially high property taxes. We must find ways to permit these families to stay and work in our city; b) Human services that remain unfunded affect us. The human suffering that some try to deny and the crime rates that none can deny both remind us of the need for improved human services; c) parking and transportation problems plague us daily. The future of downtown depends on improved methods of moving people about our city.

"CITY COUNCIL can deal with these issues in many ways. Some of these ways are: a) seeking more input from citizens in the form of ideas and participation; b) carefully monitoring the budgetary process to ensure that people-oriented priorities are stressed; c) promoting quality housing and transportation; d) reviewing fire and police service levels.

“My experience and training make me confident that I can serve the citizens of the First Ward and the city well and help make City Council a more effective body for all of us. I would appreciate your vote on April 4.”

Latta, 25, is a doctoral student of public policy studies at the University. He worked three years with the Chicago Committee on Urban Opportunity in Washington, D.C. as an intern with the Department of Labor doing program evaluation. In Ann Arbor, he has worked as a consultant to various public agencies. He is currently employed at the University of Michigan Office of Academic Planning.

“My qualifications for city office are based on two points. I present an explicitly socialist alternative to the two main capitalist parties. As a result, my political action logically supports the general welfare of people rather than production for profit. Second is the experience I have gained through several years of work in city government and my concern for government's effect on people’s lives.

My program for City Council eludes the following:

“TRULY COOPERATIVE housing for low income people, the elderly and disabled, with special attention to the inner city and the old west side; A comprehensive urban homesteading program; Greater University responsibility to provide student housing; A plan to control rents; Create political pressure to increase local and federal aid to public housing.

“Strengthening of city CETA pro-; grams and summer jobs for youth by seeking local and federal funds; Institute a city program to train and employ city residents released from prison; Concentrate on maintenance or expansion of city services.

An Anti-Strikebreaking Ordinance to insure police neutrality in labor disputes; Encourage democracy in the workplace especially for city employees.

“Increase funding and strict enforcement of the Human Rights Ordinance; Amend the ordinance to prohibit discrimination on the basis of military discharge and public assistance status.

“I have been active in city government since I arrived in Ann Arbor in 1973. During that time I have spent a year in the ranks of the unemployed. Presently I am employed at a local photocopy shop.”