'Variety' Is Spice Of Life For Some Of Us 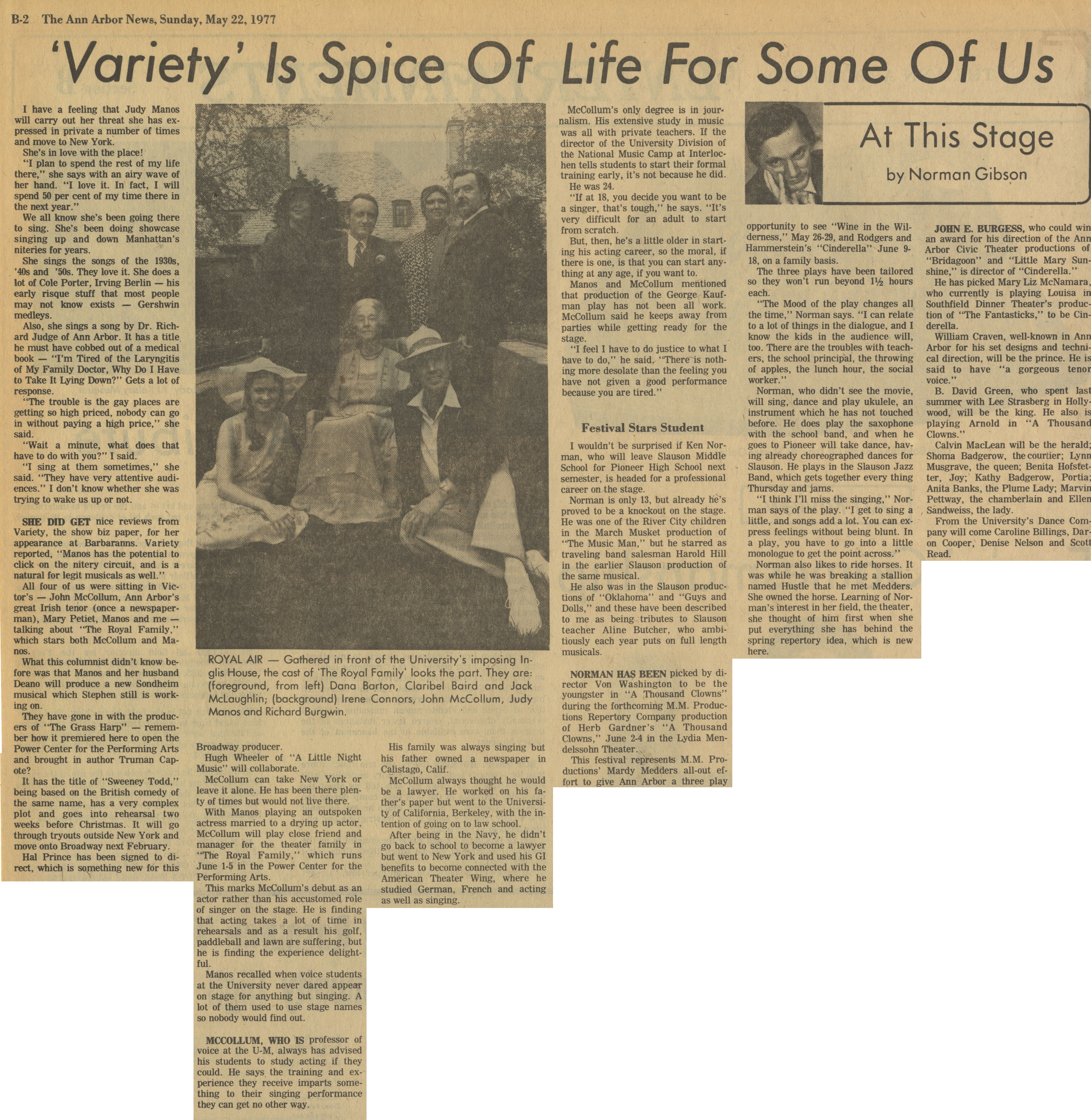 ﻿'Variety' Is Spice of Life For Some Of Us

I have a feelin that Judy Manos will carry out her threat she has expressed in private  number of times and move to New York.

She's in love with the place!

"I plan to spend the rest of my life there," she says with an airy wave of her hand. "I love it. In fact, I will spend 50 per cent of my time there in the next year."

We all know she's been going there to sing. She's been doing showcase singing up and down Manhattan's niteries for years.

She sings the songs of the 1930s, '40s and '50. They love it. She does a lot of Cole Porter, Irving Berlin -- his early risque stuff that most people may not know exists -- Gershwin medleys.

Also, she sings a song by Dr. Richard Judge of Ann Arbor. It has a title he must have cobbed out of a medical book -- "I'm Tired of the Laryngitis of My Family Doctor, Why Do I Have to Take It Lying Down?" Gets a lot of response.

"The trouble is the gay places are getting so high priced, nobody can go in without paying a high price," she said.

"Wait a minute, what does that have to do with you?" I said.

"I sing at them sometimes," she said. "They have very attentive audiences." I don't know whether she was trying to wake us up or not.

SHE DID GET nice reviews from Variety, the show biz paper, for her appearance at Barbaranns. Variety reported, "Manos has the potential to click on the nitery circuit, and is a natural for legit musicals as well."

All four of us were sitting in Victor's -- John McCollum, Ann Arbor's great Irish tenor (once a newspaper-man), Mary Petiet, Manos and me -- talking about "The Royal Family," which stars both McCollum and Manos.

What this columnist didn't know before was that Manos and her husband Deano will produce a new Sondheim musical which Stephen still is working on.

They have gone in with the producers of "The Grass Harp" -- remember how it premiered here to open the Power Center for the Performing Arts and brought in author Truman Capote?

It has the title of "Sweeney Todd," being based on the British comedy of the same name, has a very complex plot and goes into rehearsal two weeks before Christmas. It will go through tryouts outside New York and move onto Broadway next Friday.

Hal Prince has been signed to direct, which is something new for this Broadway producer.

Hugh Wheeler of "A Little Night Music" will collaborate.

McCollum can take New York or leave it alone. He has been there plenty of times but would not live there.

With Manos playing an outspoken actress married to a drying up actor, McCollum will play close friend and manager for the theater family in "The Royal Family," which runs June 1-5 in the Power Center for the Performing Arts.

This marks McCollum's debut as an actor rather than his accustomed role of singer on the stage. He is finding that acting takes a lot of time in rehearsals and as a result his golf, paddleball and lawn are suffering, but he is finding the experience delightful.

Manos recalled when voice students at the University never dared appear on stage for anything but singing. A lot of them used to use stage names so nobody would find out.

MCCOLLUM, WHO IS professor of voice at the U-M, always has advised his students to study acting if they could. He says the training and experience they receive imparts something to their singing performance they can get no other way.

His family was always singing but his father owned a newspaper in Calistago, Calif.

McCollum always thought he would be a lawyer. He worked on his father's paper but went to the University of California, Berkeley, with the intention of going on to law school.

After being in the Navy, he didn't go back to school to become a lawyer but went to New York and used his GI benefits to become connected with the American Theater Wing, where he studied German, French and acting as well as singing.

McCollum's only degree is in journalism. His extensive study in music was all with private teachers. If the director of the University Division of the National Music Camp at Interlochen tells students to start their formal training early, it's not because he did.

"If at 18, you decide you want to be a singer, that's tough," he says. "It's very difficult for an adult to start from scratch."

But, then, he's a little older in starting his acting career, so the moral, if there is one, is that you can start anything at any age, if you want to.

Manos and McCollum mentioned that production of the George Kaufman play has not been all work. McCollum said he keeps away from parties while getting ready for the stage.

"I feel I have to do justice to what I have to do," he said. "There is nothing more desolate than the feeling you have not given a good performance because you are tired."

I wouldn't be surprised if Ken Norman, who will leave Slauson Middle School for Pioneer High School next semester, is headed for a professional career on the stage.

Norman is only 13, but already he's proved to be a knockout on the stage. He was one of the River City children in the March Musket production of "The Music Man," but he starred as traveling band salesman Harold Hill in the earlier Slauson production of the same musical.

He was also in the Slauson productions of "Oklahoma" and "Guys and Dolls," and these have been described to me as being tributes to Slauson teacher Aline Butcher, who ambitiously each year puts on full length musicals.

NORMAN HAS BEEN picked by director Von Washington to be the youngster in "A Thousand Clowns" during the forthcoming M.M. Productions Repertory Company production of Herb Gardner's "A Thousand Clowns," June 2-4 in the Lydia Mendelssohn Theater.

This festival represents M.M. Productions' Mardy Meddlers all-out effort to give Ann Arbor a three play opportunity to see "Wine in the Wilderness," May 26-29, and Rodgers and Hammerstein's "Cinderella" June 9-18, on a family basis.

The three plays have been tailored so they won't run beyond 1 1/2 hours each.

"The Mood of the play changes all the time," Norman says. "I can relate to a lot of things in the dialogue, and I know the kids in the audience will, too. There are the troubles with teachers, the school principal, the throwing of apples, the lunch hour, the social worker."

Norman, who didn't see the movie, will sing, dance and play ukulele, an instrument which he has not touched before. He does play the saxophone with the school band, and when he goes to Pioneer will take dance, having already choreographed dances for Slauson. He plays in the Slauson Jazz Band, which gets together every thing Thursday and jams.

"I think I'll miss the singing," Norman says of the play. "I get to sing a little, and songs add a lot. You can express feelings without being blunt. In a play, you have to go into a little monologue to get the point across."

Norman also likes to ride horses. It was while he was breaking a stallion named Hustle that he met Medders. She owned the horse. Learning of Norman's interest in her field, the theater, she thought of him first when she put everything she has behind the spring repertory idea, which is new here.

JOHN E. BURGESS, who could win an award for his direction of the Ann Arbor Civic Theater productions of "Brigadoon" and "Little Mary Sunshine," is director of "Cinderella."

He has picked Mary Liz McNamara, who currently is playing Louisa in Southfield Dinner Theater's production of "The Fantasticks," to be Cinderella.

William Craven, well-known in Ann Arbor for his set designs and technical direction, will be the prince. He is said to have "a gorgeous tenor voice."

B. David Green, who spent last summer with Lee Strasberg in Hollywood, will be the king. He also is playing Arnold in "A Thousand Clowns."