'Wasn't Anything I Could Do' 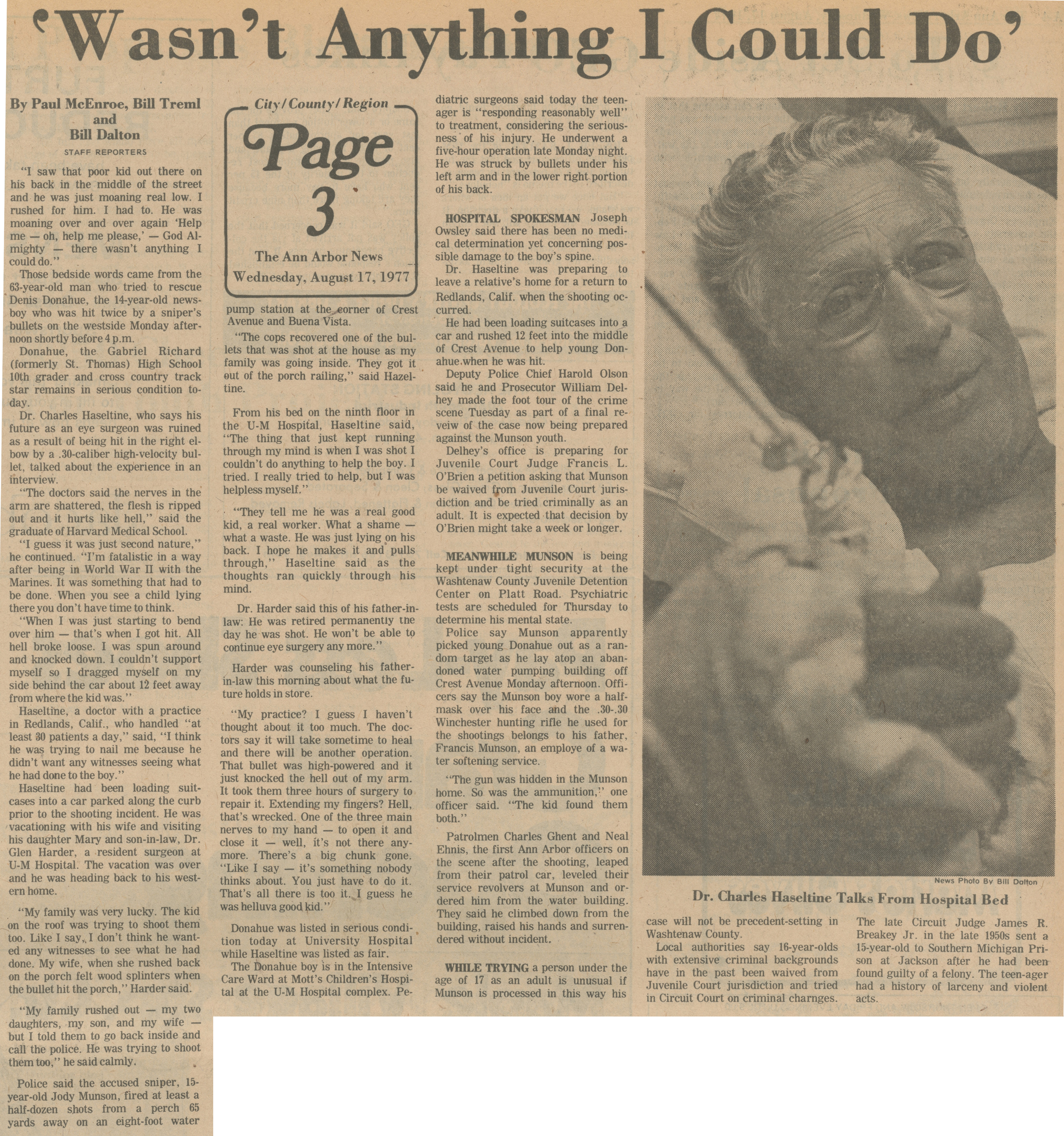 ﻿'Wasn’t Anything I Could Do’

“I saw that poor kid out there on his back in the middle of the street and he was just moaning real low. I rushed for him. I had to. He was moaning over and over again 'Help me — oh, help me please,' — God Almighty — there wasn’t anything I could do.”

Those bedside words came from the 63-year-old man who tried to rescue Denis Donahue, the 14-year-old newsboy who was hit twice by a sniper's bullets on the westside Monday afternoon shortly before 4 p.m.

Dr. Charles Haseltine, who says his future as an eye surgeon was ruined as a result of being hit in the right elbow by a .30-caliber high-velocity bullet, talked about the experience in an interview.

“The doctors said the nerves in the arm are shattered, the flesh is ripped out and it hurts like hell,” said the graduate of Harvard Medical School.

“I guess it was just second nature,” he continued. “I’m fatalistic in a way after being in World War II with the Marines. It was something that had to be done. When you see a child lying there you don’t have time to think.

“When I was just starting to bend over him — that’s when I got hit. All hell broke loose. I was spun around and knocked down. I couldn't support myself so I dragged myself on my side behind the car about 12 feet away from where the kid was.''

Haseltine, a doctor with a practice in Redlands, Calif., who handled “at least 30 patients a day," said, “I think he was trying to nail me because he didn’t want any witnesses seeing what he had done to the boy.”

Haseltine had been loading suitcases into a car parked along the curb prior to the shooting incident. He was vacationing with his wife and visiting his daughter Mary and son-in-law. Dr. Glen Harder, a resident surgeon at U-M Hospital. The vacation was over and he was heading back to his western home.

“My family was very lucky. The kid on the roof was trying to shoot them too. Like I say, I don’t think he wanted any witnesses to see what he had done. My wife, when she rushed back on the porch felt wood splinters when the bullet hit the porch,” Harder said.

“My family rushed out — my two daughters, my son, and my wife — but I told them to go back inside and call the police. He was trying to shoot them too,” he said calmly.

Police said the accused sniper, 15-year-old Jody Munson, fired at least a half-dozen shots from a perch 65 yards away on an eight-foot water pump station at the corner of Crest Avenue and Buena Vista.

“The cops recovered one of the bullets that was shot at the house as my family was going inside. They got it out of the porch railing,” said Hazeltine.

From his bed on the ninth floor in the U-M Hospital, Haseltine said, “The thing that just kept running through my mind is when I was shot I couldn't do anything to help the boy. I tried. I really tried to help, but I was helpless myself."

“They tell me he was a real good kid, a real worker. What a shame — what a waste. He was just lying on his back. I hope he makes it and pulls through.” Haseltine said as the thoughts ran quickly through his mind.

Dr. Harder said this of his father-in-law: He was retired permanently the day he was shot. He won’t be able to continue eye surgery any more.”

Harder was counseling his father-in-law this morning about what the future holds in store.

"My practice? I guess I haven't thought about it too much. The doctors say it will take sometime to heal and there will be another operation. That bullet was high-powered and it just knocked the hell out of my arm. It took them three hours of surgery to repair it. Extending my fingers? Hell, that’s wrecked. One of the three main nerves to my hand — to open it and close it — well, it’s not there anymore. There’s a big chunk gone. “Like I say — it’s something nobody thinks about. You just have to do it. That's all there is too it. I guess he was helluva good kid."

Donahue was listed in serious condition today at University Hospital while Haseltine was listed as fair.

The Donahue boy is in the Intensive Care Ward at Mott's Children’s Hospital at the U-M Hospital complex. Pediatric surgeons said today the teenager is “responding reasonably well" to treatment, considering the seriousness of his injury. He underwent a five-hour operation late Monday night. He was struck by bullets under his left arm and in the lower right portion of his back.

Hospital spokesman Joseph Owsley said there has been no medical determination yet concerning possible damage to the boy’s spine.

Dr. Haseltine was preparing to leave a relative’s home for a return to Redlands, Calif, when the shooting occurred.

He had been loading suitcases into a car and rushed 12 feet into the middle of Crest Avenue to help young Donahue when he was hit.

Deputy Police Chief Harold Olson said he and Prosecutor William Delhey made the foot tour of the crime scene Tuesday as part of a final review of the case now being prepared against the Munson youth.

Delhey’s office is preparing for Juvenile Court Judge Francis L. O’Brien a petition asking that Munson be waived from Juvenile Court jurisdiction and be tried criminally as an adult. It is expected that decision by O’Brien might take a week or longer.

Meanwhile Munson is being kept under tight security at the Washtenaw County Juvenile Detention Center on Platt Road. Psychiatric tests are scheduled for Thursday to determine his mental state.

Police say Munson apparently picked young Donahue out as a random target as he lay atop an abandoned water pumping building off Crest Avenue Monday afternoon. Officers say the Munson boy wore a halfmask over his face and the .30-.30 Winchester hunting rifle he used for the shootings belongs to his father. Francis Munson, an employee of a water softening service.

“The gun was hidden in the Munson home. So was the ammunition," one officer said. ‘The kid found them both.”

Patrolmen Charles Ghent and Neal Ehnis, the first Ann Arbor officers on the scene after the shooting, leaped from their patrol car, leveled their service revolvers at Munson and ordered him from the water building. They said he climbed down from the building, raised his hands and surrendered without incident.

While trying a person under the age of 17 as an adult is unusual if Munson is processed in this way his case will not be precedent-setting in Washtenaw County.

Local authorities say 16-year-olds with extensive criminal backgrounds have in the past been waived from Juvenile Court jurisdiction and tried in Circuit Court on criminal charges.

The late Circuit Judge James R. Breakey Jr. in the late 1950s sent a 15-year-old to Southern Michigan Prison at Jackson after he had been found guilty of a felony. The teenager had a history of larceny and violent acts.