Adding Spice To The 'Burger' Image 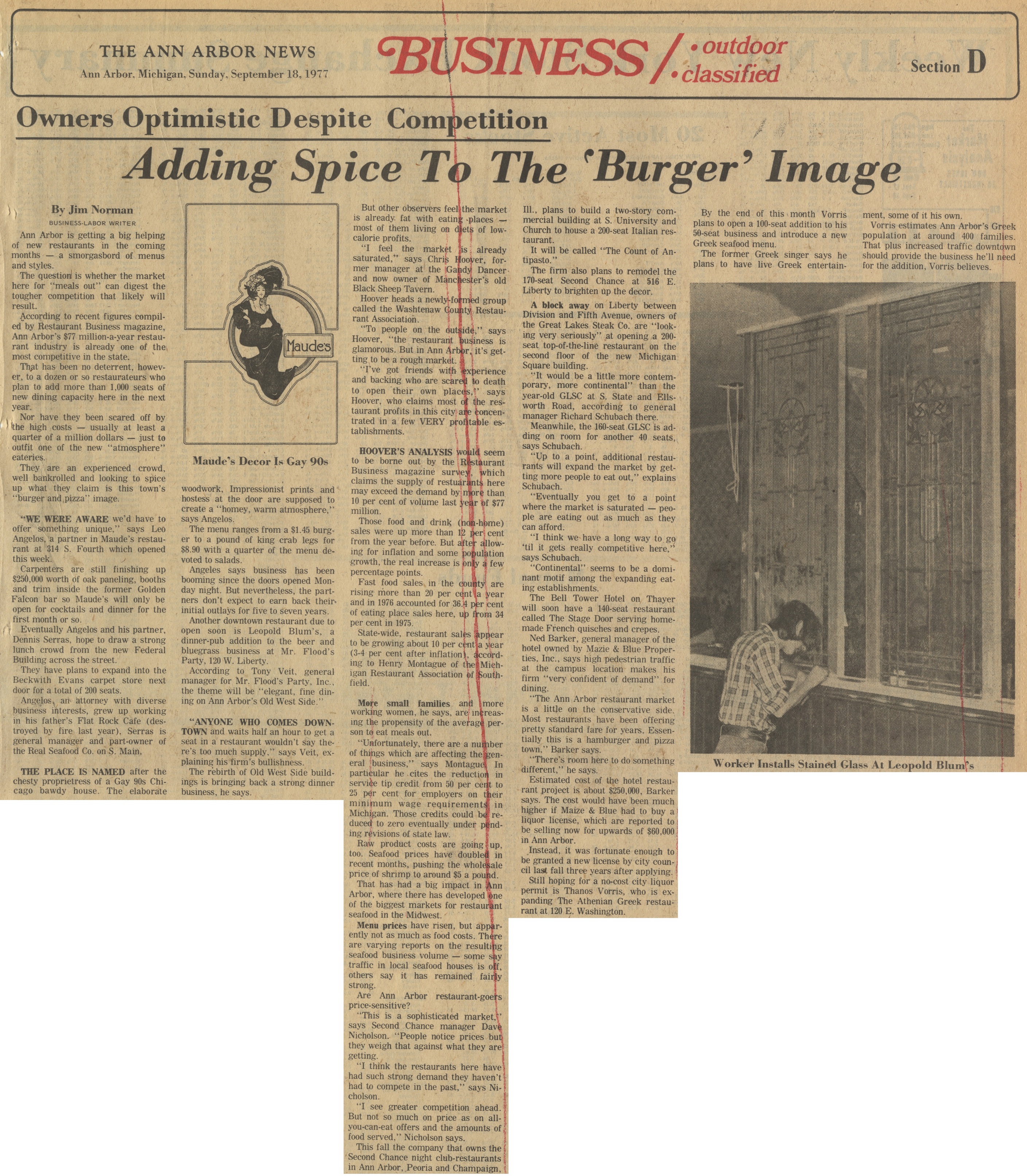 Adding Spice to the 'Burger' Image

Ann Arbor is getting a big helping of new restaurants in the coming months - a smorgasbord of menus and styles.

The question is whether the market here for "meals out" can digest the tougher competition that likely will result.

According to recent figures compiled by Restaurant Business magazine, Ann Arbor's $77 million-a-year restaurant industry is already one of the most competitive in the state.

That has been no deterrent, however, to a dozen or so restaurateurs who plan to add more than 1,000 seats of new dining capacity here in the next year.

Nor have they been scared off by the high costs - usually at least a quarter of a million dollars - just to outfit one of the new "atmosphere" eateries.

They are an experienced crowd, well bankrolled and looking to spice up what they claim is this town's "burger and pizza" image.

"We were aware we'd have to offer something unique," says Leo Angelos, a partner in Maude's restaurant at 314 S. Fourth which opened this week.

Carpenters are still finishing up $250,000 worth of oak paneling, booths and trim inside the former Golden Falcon bar so Maude's will only be open for cocktails and dinner for the first month or so.

Eventually Angelos and his partner, Dennis Serras, hope to draw a strong lunch crowd from the new Federal Building across the street.

They have plans to expand into the Beckwith Evans carpet store next door for a total of 200 seats.

Angelos, an attorney with diverse business interests, grew up working in his father's Flat Rock Cafe (destroyed by fire last year). Serras is general manager and part-owner of the Real Seafood Co. on S. Main.

The place is named after the chesty proprietress of a Gay 90s Chicago bawdy house. The elaborate woodwork, Impressionist prints and hostess at the door are supposed to create a "homey, warm atmosphere," says Angelos.

The menu ranges from a $1.45 burger to a pound of king crab legs for $8.90 with a quarter of the menu devoted to salads.

Angelos says business has been booming since the doors opened Monday night. But, nevertheless, the partners don't expect to earn back their initial outlays for five to seven years.

Another downtown restaurant due to open soon is Leopold Blum's, a dinner-pub addition to the beer and bluegrass business at Mr. Flood's Party, 120 W. Liberty.

According to Tony Veit, general manager for Mr. Flood's Party, Inc., the theme will be "elegant, fine dining on Ann Arbor's Old West Side."

"Anyone who comes downtown and waits half an hour to get a seat in a restaurant wouldn't say there's a too much supply," says Veit, explaining his firm's bullishness.

The rebirth of Old West Side buildings is bringing back a strong dinner business, he says.

But other observers feel the marker is already fat with eating places most of them living on diets of low-calorie profits.

"To people on the outside," says Hoover, "the restaurant business is glamorous. But in Ann Arbor, it's getting to be a rough market.

"I've got friends with experience and backing who are scared to death to open their own places," says Hoover, who claims most of the restaurant profits in this city are concentrated in a few VERY profitable establishments.

Hoover's analysis would seem to be borne out by the Restaurant Business magazine survey, which claims the supply of restaurants here may exceed the demand by more than 10 per cent of the volume last year of $77 million.

Those food and drink (non-home) sales were up more than 12 per cent from the year before. But after allowing for inflation and some population growth, the real increase is only a few percentage points.

State-wide, restaurant sales appear to be growing about 10 per cent a year (3-4 per cent after inflation), according to Henry Montague of the Michigan Restaurant Association of Southfield.

More small families and more working women, he says, are increasing the propensity of the average person to eat meals out.

"Unfortunately, there are a number of things which are affecting the general business," says Montague. In particular he cites the reduction in service tip credit from 50 per cent to 25 per cent for employers on their minimum wage requirements in Michigan. Those credits could be reduced to zero eventually under pending revisions of state law.

Raw product costs are going up, too. Seafood prices have doubled in recent months, pushing the wholesale price of shrimp to around $5 a pound.

That has a big impact in Ann Arbor, where there has developed one of the biggest markets for restaurant seafood in the Midwest.

Menu prices have risen, but apparently not as much as food costs. There are varying reports on the resulting seafood business volume - some say traffic in local seafood houses is off, others say it has remained fairly strong.

"This is a sophisticated market," says Second Chance manager Dave Nicholson. "People notice prices but they weigh that against what they are getting.

"I think the restaurants here have had such strong demand they haven't had to compete in the past," says Nicholson.

"I see greater competition ahead. But not so much on price as on all-you-can-eat offers and the amounts of food served," Nicholson says.

This fall the company that owns the Second Chance night club-restaurants in Ann Arbor, Peoria, and Champaign, Ill., plans to build a two-story commercial building at S. University and Church to house a 200-seat Italian restaurant.

It will be called "The Count of Antipasto."

The firm also plans to remodel the 170-seat Second Chance at 516 E. Liberty to brighten up the decor.

A block away on Liberty between Division and Fifth Avenue, owners of the Great Lakes Steak Co. are "looking very seriously" at opening a 200-seat top-of-the-line restaurant on the second floor of the new Michigan Square building.

"It would be a little more contemporary, more continental" than the year-old GLSC at S. State and Ellsworth road, according to general manager Richard Schubach there.

Meanwhile, the 160-seat GLSC is adding on room for another 40 seats, says Schubach.

"Up to a point, additional restaurants will expand the market by getting more people to eat out," explains Schubach.

"Eventually, you get to a point where the market is saturated - people are eating out as much as they can afford.

"I think we have a long way to go 'til it gets really competitive here," says Schubach.

"Continental" seems to be a dominant motif among the expanding eating establishments.

The Bell Tower Hotel on Thayer will soon have a 140-seat restaurant called The Stage Door serving home-made French quiches and crepes.

"The Ann Arbor restaurant market is a little on the conservative side. Most restaurants have been offering pretty standard fare for years. Essentially this is a hamburger and pizza town," Barker says.

"There's room here to do something different," he says.

Estimated cost of the hotel restaurant project is about $250,000, Barker says. The cost would have been much higher if Maize & Blue had to buy a liquor license, which are reported to be selling now for upwards of $60,000 in Ann Arbor.

Instead, it was fortunate enough to be granted a new license by city council last fall three years after applying.

Still hoping for a no-cost city liquor permit is Thanos Vorris, who is expanding The Athenian Greek restaurant at 120 E. Washington.

By the end of this month Vorris plans to open a 100- seat addition to his 50-seat business and introduce a new Greek seafood menu.

The former Greek singer says he plans to have live Greek entertainment, some of it his own.

Vorris estimates Ann Arbor's Greek population is at around 400 families. That plus increased traffic downtown should provide the business he'll need for the addition, Vorris believes.