'Waltz' Is Light And Graceful 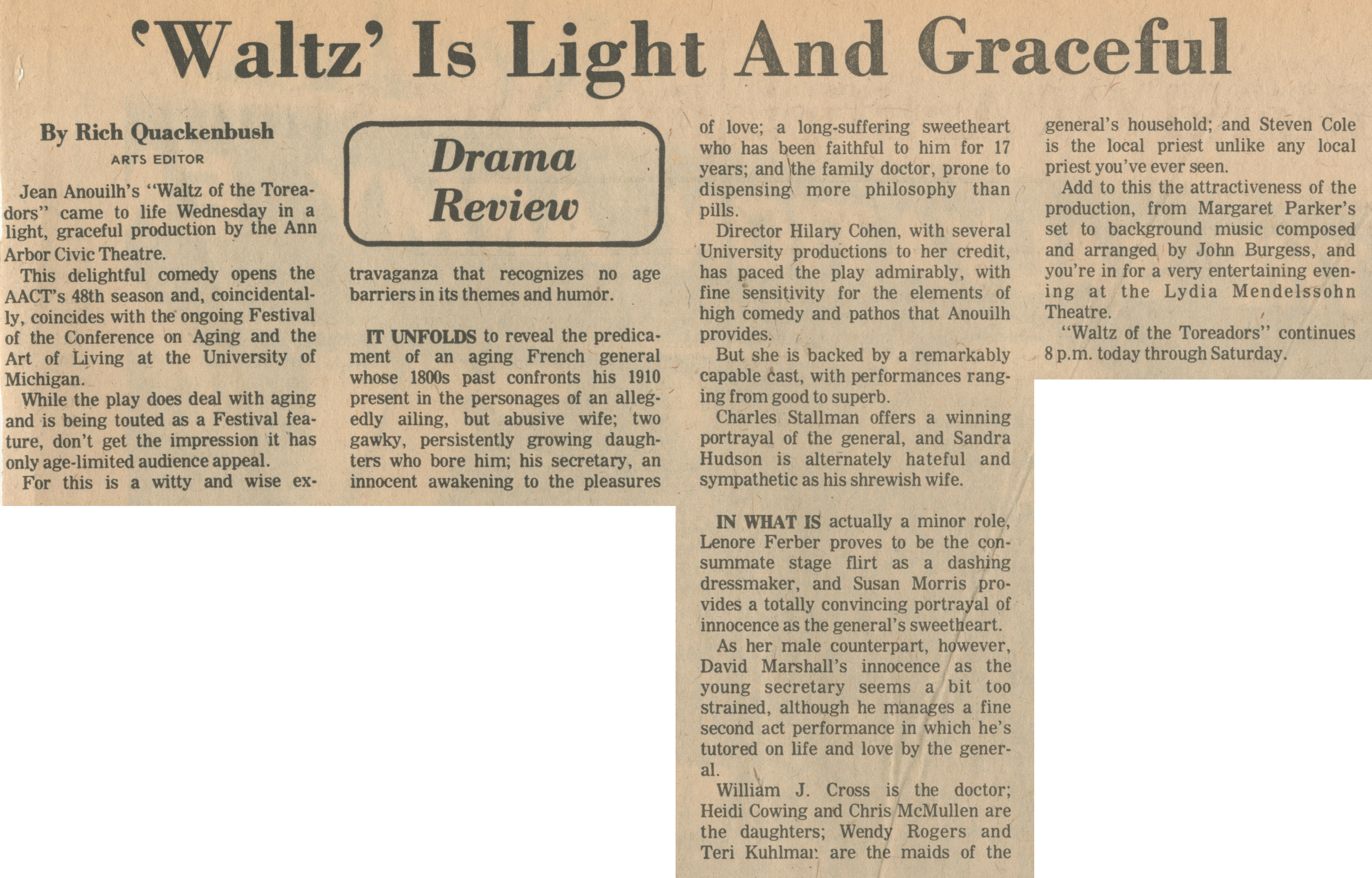 ﻿'Waltz’ Is Light And Graceful

ARTS EDITOR Jean Anouilh’s “Waltz of the Toreadors” came to life Wednesday in a light, graceful production by the Ann Arbor Civic Theatre.

This delightful comedy opens the AACT’s 48th season and, coincidentally, coincides with the ongoing Festival of the Conference on Aging and the Art of Living at the University of Michigan.

While the play does deal with aging and is being touted as a Festival feature, don't get the impression it has only age-limited audience appeal.

For this is a witty and wise extravaganza that recognizes no age barriers in its themes and humor.

IT UNFOLDS to reveal the predicament of an aging French general whose 1800s past confronts his 1910 present in the personages of an allegedly ailing, but abusive wife; two gawky, persistently growing daughters who bore him; his secretary, an innocent awakening to the pleasures of love; a long-suffering sweetheart who has been faithful to him for 17 years; and the family doctor, prone to dispensing more philosophy than pills.

Director Hilary Cohen, with several University productions to her credit, has paced the play admirably, with fine sensitivity for the elements of high comedy and pathos that Anouilh provides.

But she is backed by a remarkably capable cast, with performances ranging from good to superb.

Charles Stallman offers a winning portrayal of the general, and Sandra Hudson is alternately hateful and sympathetic as his shrewish wife.

IN WHAT IS actually a minor role, Lenore Ferber proves to be the consummate stage flirt as a dashing dressmaker, and Susan Morris provides a totally convincing portrayal of innocence as the general's sweetheart.

As her male counterpart, however, David Marshall’s innocence as the young secretary seems a bit too strained, although he manages a fine second act performance in which he’s tutored on life and love by the general.

William J. Cross is the doctor; Heidi Cowing and Chris McMullen are the daughters; Wendy Rogers and Teri Kuhlmar are the maids of the general’s household; and Steven Cole is the local priest unlike any local priest you’ve ever seen.

Add to this the attractiveness of the production, from Margaret Parker’s set to background music composed and arranged by John Burgess, and you’re in for a very entertaining evening at the Lydia Mendelssohn Theatre.

“Waltz of the Toreadors” continues 8 p.m. today through Saturday.