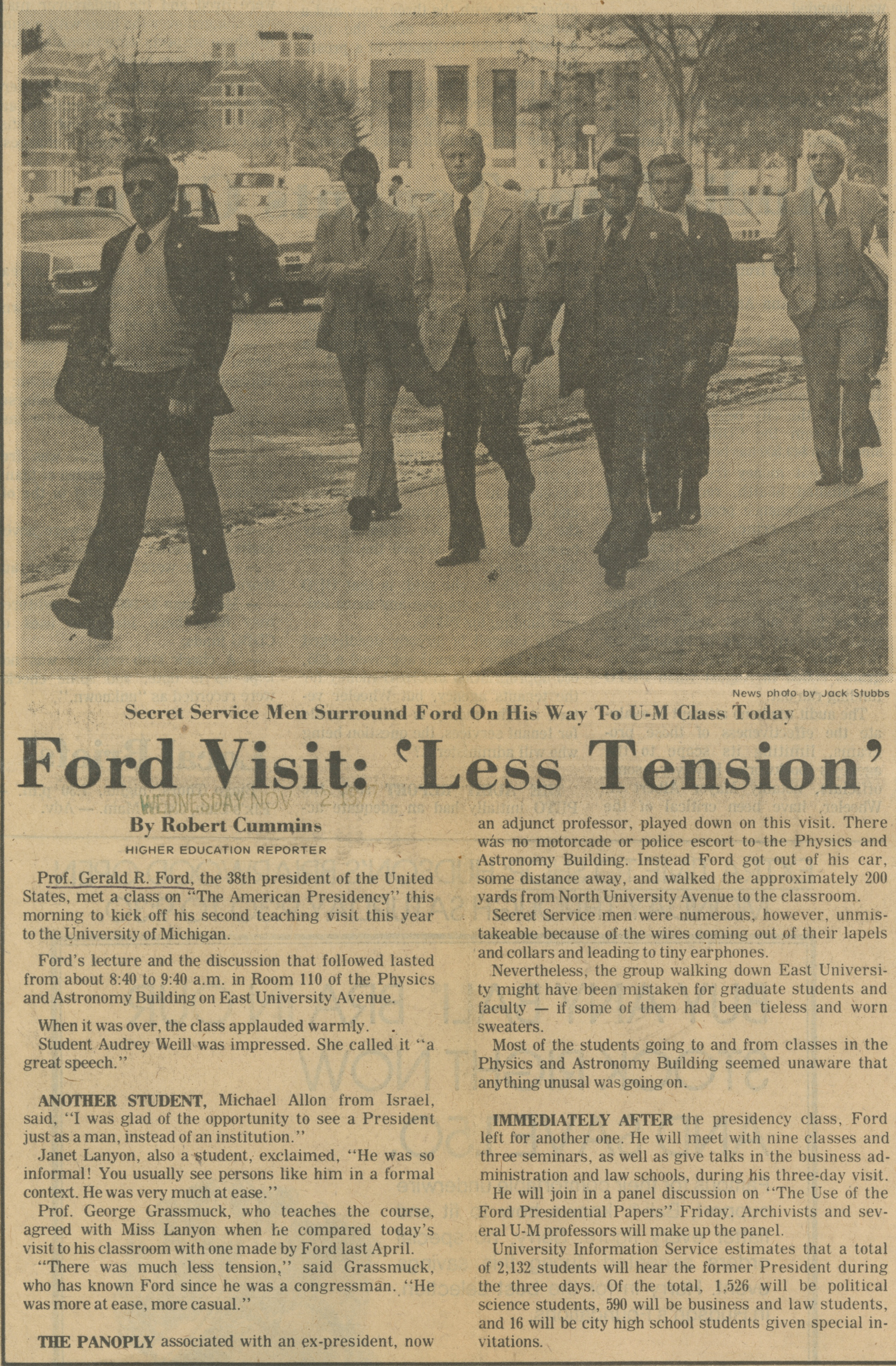 Prof. Gerald R. Ford, the 38th president of the United States, met a class on “The American Presidency” this morning to kick off his second teaching visit this year to the University of Michigan.

Ford’s lecture and the discussion that followed lasted from about 8:40 to 9:40 a.m. in Room 110 of the Physics and Astronomy Building on East University Avenue.

When it was over, the class applauded warmly.

Student Audrey Weill was impressed. She called it “a great speech.”

ANOTHER STUDENT, Michael Allon from Israel, said, “I was glad of the opportunity to see a President just as a man, instead of an institution.”

Janet Lanyon, also a student, exclaimed, “He was so informal! You usually see persons like him in a formal context. He was very much at ease.”

Prof. George Grassmuck, who teaches the course, agreed with Miss Lanyon when he compared today’s visit to his classroom with one made by Ford last April.

“There was much less tension,” said Grassmuck, who has known Ford since he was a congressman. “He was more at ease, more casual.”

THE PANOPLY associated with an ex-president, now an adjunct professor, played down on this visit. There was no motorcade or police escort to the Physics and Astronomy Building. Instead Ford got out of his car, some distance away, and walked the approximately 200 yards from North University Avenue to the classroom.

Secret Service men were numerous, however, unmistakeable because of the wires coming out of their lapels and collars and leading to tiny earphones.

Nevertheless, the group walking down East University might have been mistaken for graduate students and faculty — if some of them had been tieless and worn sweaters.

Most of the students going to and from classes in the Physics and Astronomy Building seemed unaware that anything unusual was going on.

IMMEDIATELY AFTER the presidency class, Ford left for another one. He will meet with nine classes and three seminars, as well as give talks in the business administration and law schools, during his three-day visit.

He will join in a panel discussion on “The Use of the Ford Presidential Papers” Friday. Archivists and several U-M professors will make up the panel.

University Information Service estimates that a total of 2,132 students will hear the former President during the three days. Of the total, 1,526 will be political science students, 590 will be business and law students, and 16 will be city high school students given special invitations.