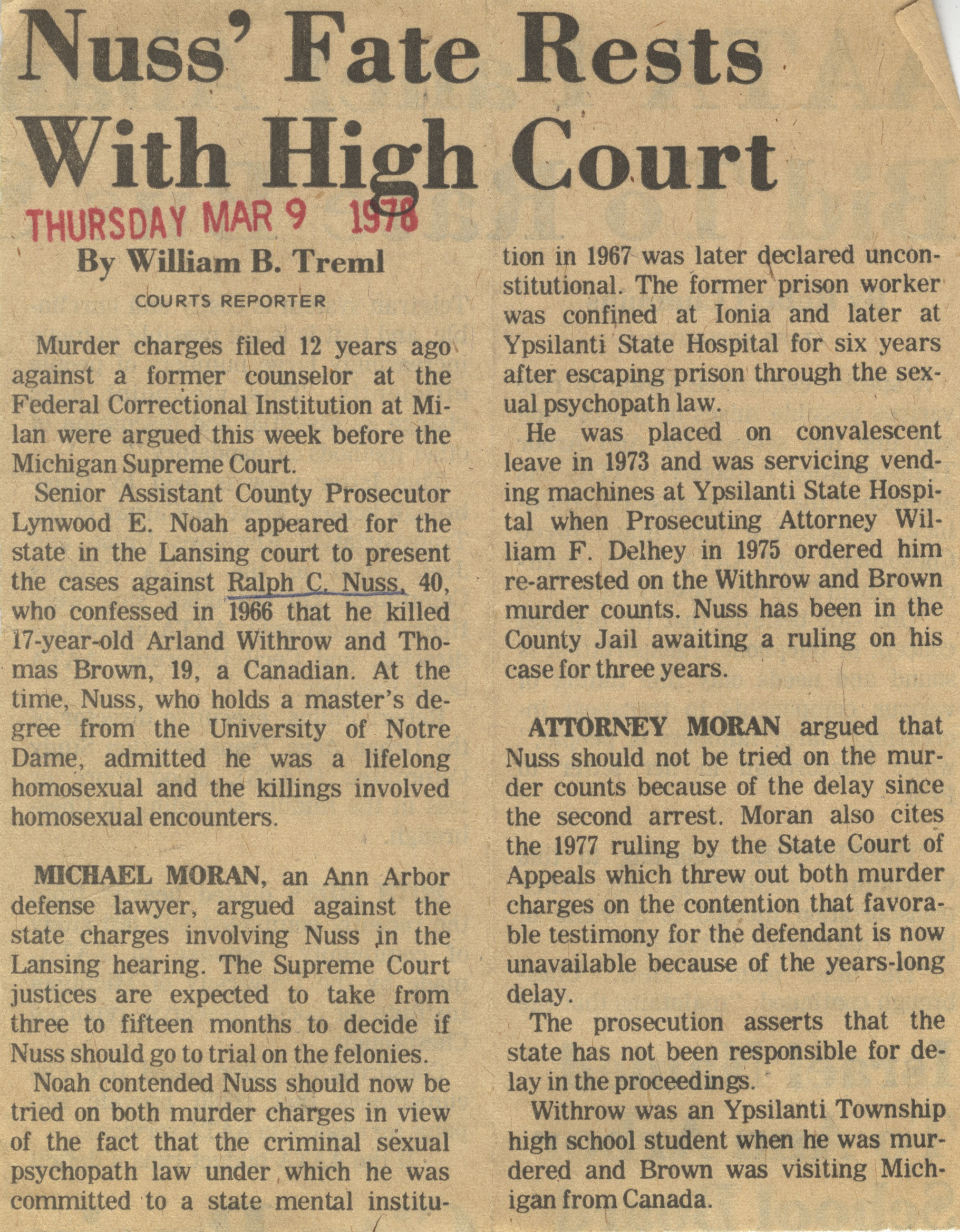 Murder charges filed 12 years ago against a former counselor at the Federal Correctional Institution at Milan were argued this week before the Michigan Supreme Court.

Senior Assistant County Prosecutor Lynwood E. Noah appeared for the state in the Lansing court to present the cases against Ralph C. Nuss. 40, who confessed in 1966 that he killed 17-year-old Arland Withrow and Thomas Brown, 19, a Canadian. At the time, Nuss, who holds a master’s degree from the University of Notre Dame, admitted he was a lifelong homosexual, and the killings involved homosexual encounters.

MICHAEL MORAN, an Ann Arbor defense lawyer, argued against the state charges involving Nuss in the Lansing hearing. The Supreme Court justices are expected to take from three to fifteen months to decide if Nuss should go to trial on the felonies.

Noah contended Nuss should now be tried on both murder charges in view of the fact that the criminal sexual psychopath law under which he was committed to a state mental institution in 1967 was later declared unconstitutional. The former prison worker was confined at Ionia and later at Ypsilanti State Hospital for six years after escaping prison through the sexual psychopath law.

He was placed on convalescent leave in 1973 and was servicing vending machines at Ypsilanti State Hospital when Prosecuting Attorney William F. Delhey in 1975 ordered him re-arrested on the Withrow and Brown murder counts. Nuss has been in the County Jail awaiting a ruling on his case for three years.

ATTORNEY MORAN argued that Nuss should not be tried on the murder counts because of the delay since the second arrest. Moran also cites the 1977 ruling by the State Court of Appeals which threw out both murder charges on the contention that favorable testimony for the defendant is now unavailable because of the years-long delay.

The prosecution asserts that the state has not been responsible for delay in the proceedings.

Withrow was an Ypsilanti Township high school student when he was murdered and Brown was visiting Michigan from Canada.