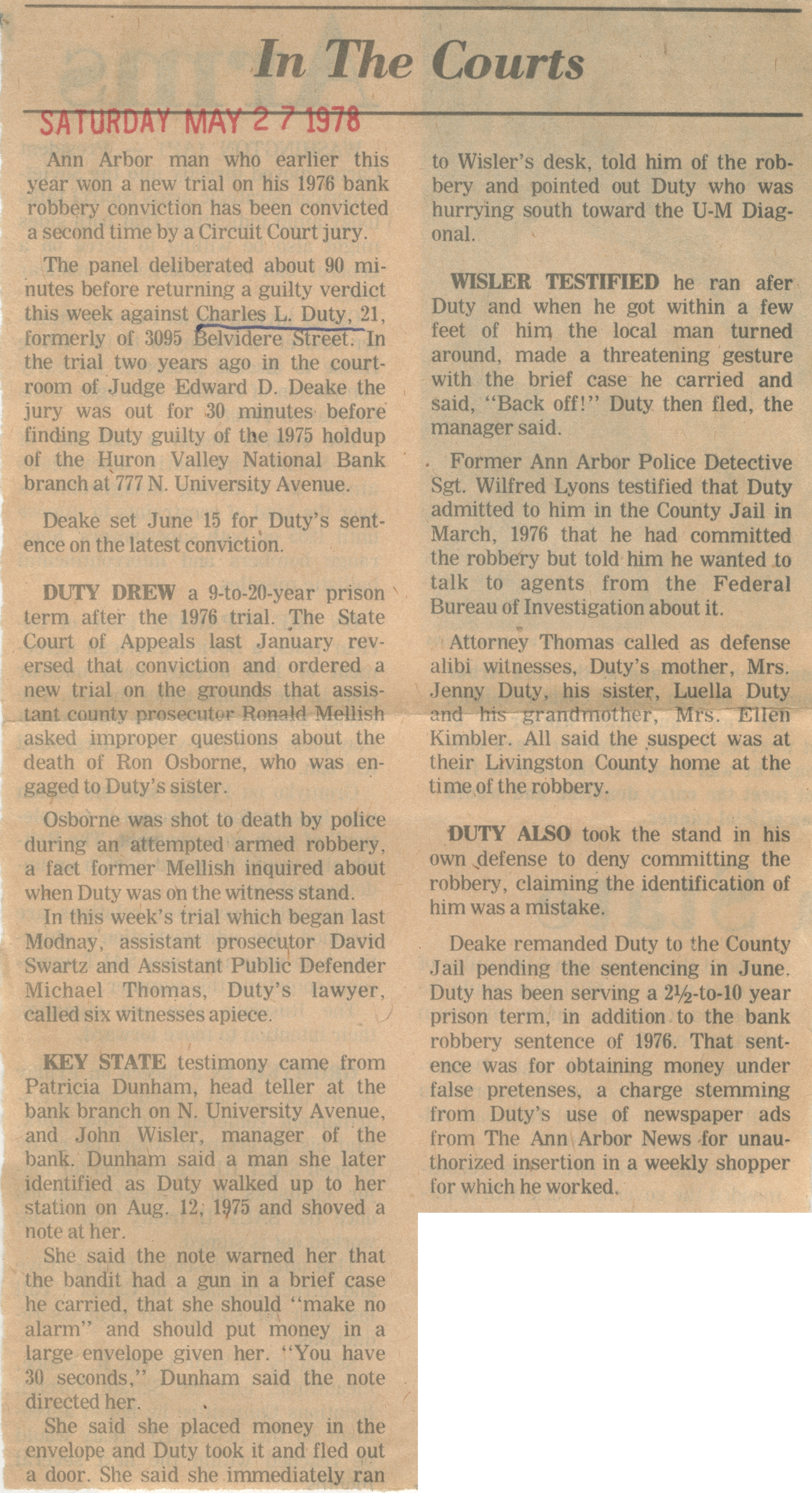 Ann Arbor man who earlier this year won a new trial on his 1976 bank robbery conviction has been convicted a second time by a Circuit Court jury.

The panel deliberated about 90 minutes before returning a guilty verdict this week against Charles L. Duty, 21, formerly of 3095 Belvidere Street. In the trial two years ago in the courtroom of Judge Edward D. Deake the jury was out for 30 minutes before finding Duty guilty of the 1975 holdup of the Huron Valley National Bank branch at 777 N. University Avenue.

Deake set June 15 for Duty’s sentence on the latest conviction.

DUTY DREW a 9-to-20-year prison term after the 1976 trial. The State Court of Appeals last January reversed that conviction and ordered a new trial on the grounds that assistant county prosecutor Ronald Mellish asked improper questions about the death of Ron Osborne, who was engaged to Duty’s sister.

Osborne was shot to death by police during an attempted armed robbery, a fact former Mellish inquired about when Duty was on the witness stand.

KEY STATE testimony came from Patricia Dunham, head teller at the bank branch on N. University Avenue, and John Wisler, manager of the bank. Dunham said a man she later identified as Duty walked up to her station on Aug. 12, 1975 and shoved a note at her.

She said the note warned her that the bandit had a gun in a brief case he carried, that she should “make no alarm” and should put money in a large envelope given her. “You have 30 seconds,” Dunham said the note directed her.

She said she placed money in the envelope and Duty took it and fled out a door. She said she immediately ran to Wisler’s desk, told him of the robbery and pointed out Duty who was hurrying south toward the U-M Diagonal.

WISLER TESTIFIED he ran afer Duty and when he got within a few feet of him the local man turned around, made a threatening gesture with the brief case he carried and said, “Back off!” Duty then fled, the manager said.

Former Ann Arbor Police Detective Sgt. Wilfred Lyons testified that Duty admitted to him in the County Jail in March, 1976 that he had committed the robbery but told him he wanted to talk to agents from the Federal Bureau of Investigation about it.

Attorney Thomas called as defense alibi witnesses. Duty’s mother, Mrs. Jenny Duty, his sister, Luella Duty and his grandmother, Mrs. Ellen Kimbler. All said the suspect was at their Livingston County home at the time of the robbery.

DUTY ALSO took the stand in his own defense to deny committing the robbery, claiming the identification of him was a mistake.

Deake remanded Duty to the County Jail pending the sentencing in June. Duty has been serving a 2 1/2-to-10 year prison term, in addition to the bank robbery sentence of 1976. That sentence was for obtaining money under false pretenses, a charge stemming from Duty’s use of newspaper ads from The Ann Arbor News for unauthorized insertion in a weekly shopper for which he worked.