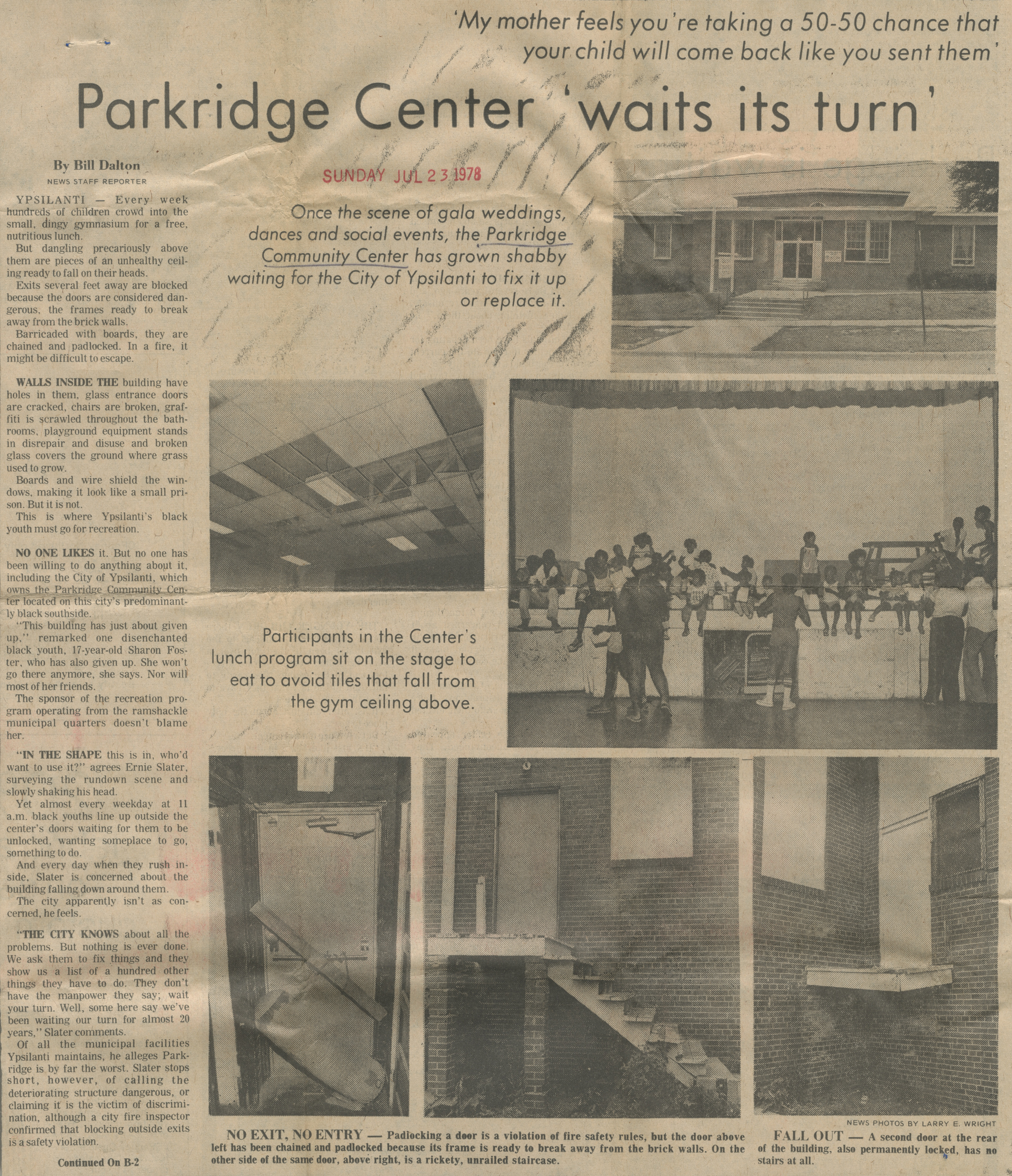 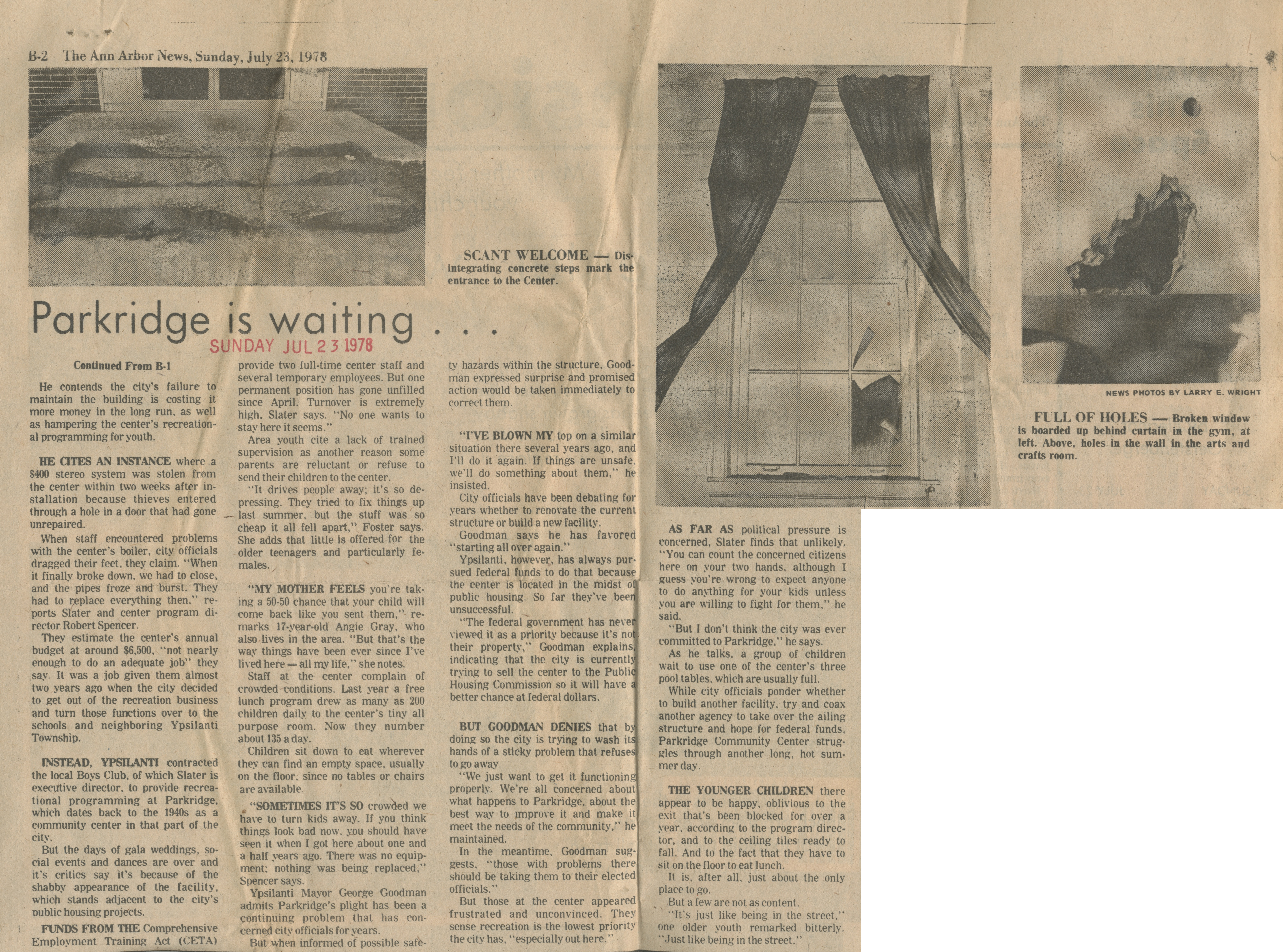 YPSILANTI -- Every week hundreds of children crowd into the small, dingy gymnasium for a free, nutritious lunch.

But dangling precariously above them are pieces of an unhealthy ceiling ready to fall on their heads.

Exits several feet away are blocked because the doors are considered dangerous, the frames ready to break away from the brick walls.

Barricaded with boards, they are chained and padlocked. In a fire, it might be difficult to escape.

WALLS INSIDE THE building have holds in them, glass entrance doors are cracked, chairs are broken, graffiti is scrawled throughout the bathrooms, playground equipment stands in disrepair and disuse and broken glass covers the ground where grass used to grow.

Boards and wire shield the windows, making it look like a small prison. But it is not.

This where Ypsilanti's black youth must go for recreation.

NO ONE LIKES it. But no one has been willing to do anything about it, including the City of Ypsilanti, which owns the Parkridge Community Center located on this city's predominantly black southside.

"This building has just about given up," remarked one disenchanted black youth, 17-year-old Sharon Foster, who has also given up. She won't go there anymore, she says. Nor will most of her friends.

The sponsor of the recreation program operating from the ramshackle municipal quarter doesn't blame her.

"IN THE SHAPE this is in, who's want to use it?" agrees Ernie Slater, surveying the rundown scene and slowly shaking his head.

Yet almost every weekday at 11 a.m. black youths line up outside the center's doors waiting for them to be unlocked, wanting someplace to, something to do.

And every day when they rush inside, Slater is concerned about the building falling down around them.

The city apparently isn't as concerned, he feels.

"THE CITY KNOWS about all the problems. But nothing is ever done. We ask them to fix things and they show us a list of a hundred other things have to do. They don't have the manpower they say, wait your turn. Well, some here say we've been waiting our turn for almost 20 years," Slater comments.

Of all the municipal facilities Ypsilanti maintains, he alleges Parkridge is by far the worst. Slater stops short, however, of calling the deteriorating structure dangerous, or claiming it is the victim of discrimination, although a city fire inspector confirmed that blocking outside exits is a safety violation.

He contends the city's failure to maintain the building is costing it more money in the long run, as well as hampering the center's recreational programming for youth.

HE CITES AN INSTANCE where a $400 stereo system was stolen from the center within two weeks after installation because thieves entered through a hole in a door that had gone unrepaired.

When staff encountered problems with the center's boiler, city officials dragged their feet, they claim. "When it finally broke down, we had to close, and the pipes froze and burst. They had to replace everything then," reports Slater and center program director Robert Spencer.

They estimate the center's annual budget at around $6,500, "not nearly enough to do an adequate job" they say. It was a job given them almost two years ago when the city decided to get out of the recreation business and turn those functions over to the schools and neighboring Ypsilanti Township.

INSTEAD, YPSILANTI contracted the local Boys Club, of which Slater is executive director, to provide recreational programming at Parkridge, which dates back to the 1940s as a community center in that part of the city.

But the days of gala weddings, social events and dances are over and it's [sic] critics say it's because of the shabby appearance of the facility, which stands adjacent to the city's public housing projects.

FUNDS FROM THE Comprehensive Employment Training Act (CETA) provide two full-time center staff and several temporary employees. But one permanent position has gone unfilled since April. Turnover is extremely high, Slater says, "No one wants to stay here it seems."

Area youth cite a lack of trained supervision as another reason some parents are reluctant or refuse to send their children to the center.

"It drives people away; it's so depressing. They tried to fix things up last summer, but the stuff was so cheap it all fell apart," Foster says. She adds that little is offered for the older teenagers and particularly females.

"MY MOTHER FEELS you're taking a 50-50 chance that your child will come back like you sent them," remarks 17-year-old Angie Gray, who also lives in the area. "But that's the way things have been ever since I've lived here -- all my life." She notes.

Staff at the center complain of crowded conditions. Last year a free lunch program drew as many as 200 children daily to the center's tiny all purpose room. Now they number about 135 a day.

Children sit down to eat wherever they can find an empty space, usually on the floor, since no tables or chairs are available.

"SOMETIMES IT'S SO crowded we have to turn kids away. If you think things look bad  now, you should have seen it when I got here about one and a half years ago. There was no equipment; nothing was being replaced," Spencer says.

Ypsilanti Mayor George Goodman admits Parkridge's plight has been a continuing problem that has concerned city officials for years.

But when informed of possible safety hazards within the structure, Goodman expressed surprise and promised action would be taken immediately to correct them.

"I'VE BLOWN MY top on a similar situation there several years ago, and I'll do it again. If things are unsafe, we'll do something about them," he insisted.

City officials have been debating for years whether to renovate the current structure or build a new facility.

Goodman says he has favored "starting all over again."

Ypsilanti, however, has always pursued federal funds to do that because the center is located in the midst of public housing. So far they've been unsuccessful.

"The federal government has never viewed it as a priority because it's not their property," Goodman explains, indicating that the city is currently trying to sell the center to the Public Housing Commission so it will have a better chance at federal dollars.

BUT GOODMAN DENIES that by doing so the city is trying to wash its hands of a sticky problem that refuses to go away.

"We just want to get it functioning properly. We're all concerned about what happens to Parkridge, about the best way to improve it and make it meet the needs of the community," he maintained.

In the meantime, Goodman suggests, "those with problems there should be taking them to their elected officials."

But those at the center appeared frustrated and unconvinced. They sense recreation is the lowest priority the city has, "especially out here."

AS FAR AS political pressure is concerned, Slater finds that unlikely. "You can count the concerned citizens here on your two hands, although I guess you're wrong to expect anyone to do anything for your kids unless you are willing to fight for them," he said.

"But I don't think the city was ever committed to Parkridge," he says.

As he talks, a group of children wait to use one of the center's three pool tables, which are usually full.

While city officials ponder whether to build another facility, try and coax another agency to take over the ailing structure and hope for federal funds, Parkridge Community Center struggles through another long, hot summer day.

THE YOUNGER CHILDREN there appear to be happy, oblivious to the exist that's been blocked for over a year, according to the program director, and to the ceiling tiles ready to fall. And to the fact they have to sit on the floor to eat lunch.

It is, after all, just about the only place to go.

Once the scene of gala weddings, dances and social events, the Parkridge Community Center has grown shabby waiting for the City of Ypsilanti to fix it up or replace it.

Participants in the Center's lunch program sit on the stage to eat to avoid tiles that fall from the gym ceiling above.

NO EXIT, NO ENTRY -- Padlocking a door is a violation of fire safety rules, but the door above has been chained and padlocked because its frame is ready to break away from the brick walls. On the other side of the same door, above right, is a rickety, unrailed staircase.

FALL OUT -- A second door at the rear of the building, also permanently locked, has no stairs at all.

FULL OF HOLES -- Broken window is boarded up behind curtain in the gym, at left. Above, holes in the wall in the arts and crafts room.