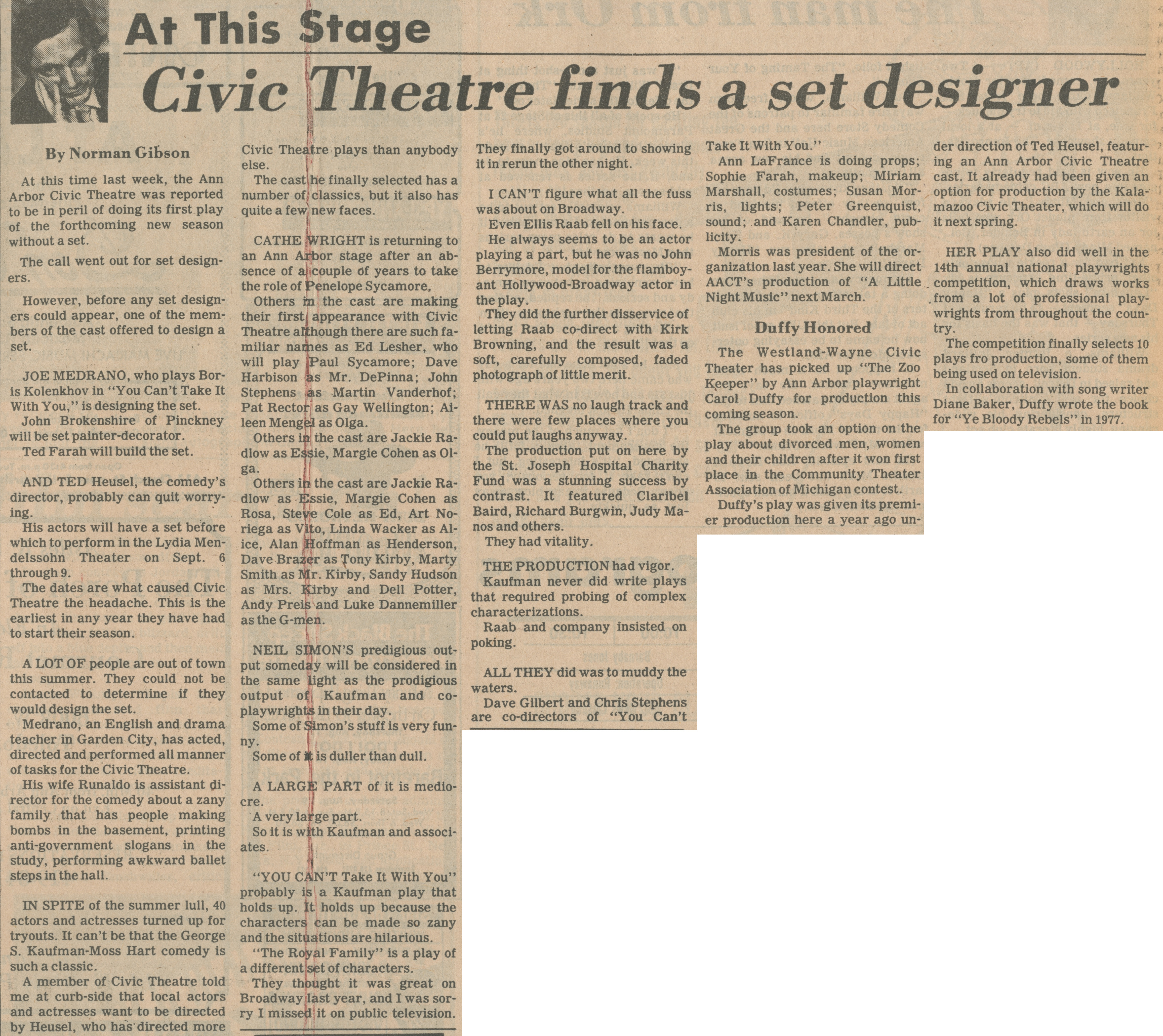 At this time last week, the Ann Arbor Civic Theatre was reported to be in peril of doing its first play of the forthcoming new season without a set.

The call went out for set designers.

However, before any set designers could appear, one of the members of the cast offered to design a set.

JOE MEDRANO, who plays Boris Kolenkhov in “You Can’t Take It With You,” is designing the set.

John Brokenshire of Pinckney will be set painter-decorator.

Ted Farah will build the set.

AND TED Heusel, the comedy’s director, probably can quit worrying.

His actors will have a set before which to perform in the Lydia Mendelssohn Theater on Sept. 6 through 9.

The dates are what caused Civic Theatre the headache. This is the earliest in any year they have had to start their season.

A LOT OF people are out of town this summer. They could not be contacted to determine if they would design the set.

Medrano, an English and drama teacher in Garden City, has acted, directed and performed all manner of tasks for the Civic Theatre.

His wife Runaldo is assistant director for the comedy about a zany family that has people making bombs in the basement, printing anti-government slogans in the study, performing awkward ballet steps in the hall.

IN SPITE of the summer lull, 40 actors and actresses turned up for tryouts. It can’t be that the George S. Kaufman-Moss Hart comedy is such a classic.

A member of Civic Theatre told me at curb-side that local actors and actresses want to be directed by Heusel, who has directed more Civic Theatre plays than anybody else.

The cast he finally selected has a number of classics, but it also has quite a few new faces.

CATHE WRIGHT is returning to an Ann Arbor stage after an absence of a) couple of years to take the role of Penelope Sycamore.

Others in the cast are making their first appearance with Civic Theatre although there are such familiar names as Ed Lesher, who will play Paul Sycamore; Dave Harbison as Mr. DePinna; John Stephens as Martin Vanderhof; Pat Rectof as Gay Wellington; Aileen Mengel as Olga.

Others in the cast are Jackie Radlow as Essie, Margie Cohen as Olga.

Others in the cast are Jackie Radlow as Essie, Margie Cohen as Rosa, Steve Cole as Ed, Art Noriega as Vito, Linda Wacker as Alice, Alan Hoffman as Henderson, Dave Brazer as Tony Kirby, Marty Smith as Mr. Kirby, Sandy Hudson as Mrs. Kirby and Dell Potter, Andy Preis and Luke Dannemiller as the G-men.

NEIL SIMON’S predigious output someday will be considered in the same light as the prodigious output of Kaufman and co-playwrights in their day.

Some of Simon’s stuff is very funny.

Some of it is duller than dull.

A LARGE PART of it is mediocre.

So it is with Kaufman and associates.

“YOU CAN’T Take It With You” probably is a Kaufman play that holds up. It holds up because the characters can be made so zany and the situations are hilarious.

“The Royal Family” is a play of a different set of characters.

They thought it was great on Broadway last year, and I was sorry I missed it on public television.

They finally got around to showing it in rerun the other night.

I CAN’T figure what all the fuss was about on Broadway.

Even Ellis Raab fell on his face.

He always seems to be an actor playing a part, but he was no John Berrymore, model for the flamboyant Hollywood-Broadway actor in the play.

They did the further disservice of letting Raab co-direct with Kirk Browning, and the result was a soft, carefully composed, faded photograph of little merit.

THERE WAS no laugh track and there were few places where you could put laughs anyway.

The production put on here by the St. Joseph Hospital Charity Fund was a stunning success by contrast. It featured Claribel Baird, Richard Burgwin, Judy Manos and others.

THE PRODUCTION had vigor.

Raab and company insisted on poking.

ALL THEY did was to muddy the waters.

Dave Gilbert and Chris Stephens are co-directors of “You Can’t Take It With You.”

Morris was president of the organization last year. She will direct AACT’s production of “A Little Night Music” next March.

The Westland-Wayne Civic Theater has picked up “The Zoo Keeper” by Ann Arbor playwright Carol Duffy for production this coming season.

The group took an option on the play about divorced men, women and their children after it won first place in the Community Theater Association of Michigan contest.

Duffy’s play was given its premier production here a year ago under direction of Ted Heusel, featuring an Ann Arbor Civic Theatre cast. It already had been given an option for production by the Kalamazoo Civic Theater, which will do it next spring.

The competition finally selects 10 plays fro production, some of them being used on television.

In collaboration with song writer Diane Baker, Duffy wrote the book for “Ye Bloody Rebels” in 1977.