Jazz Festival: out to out-Newport Newport! 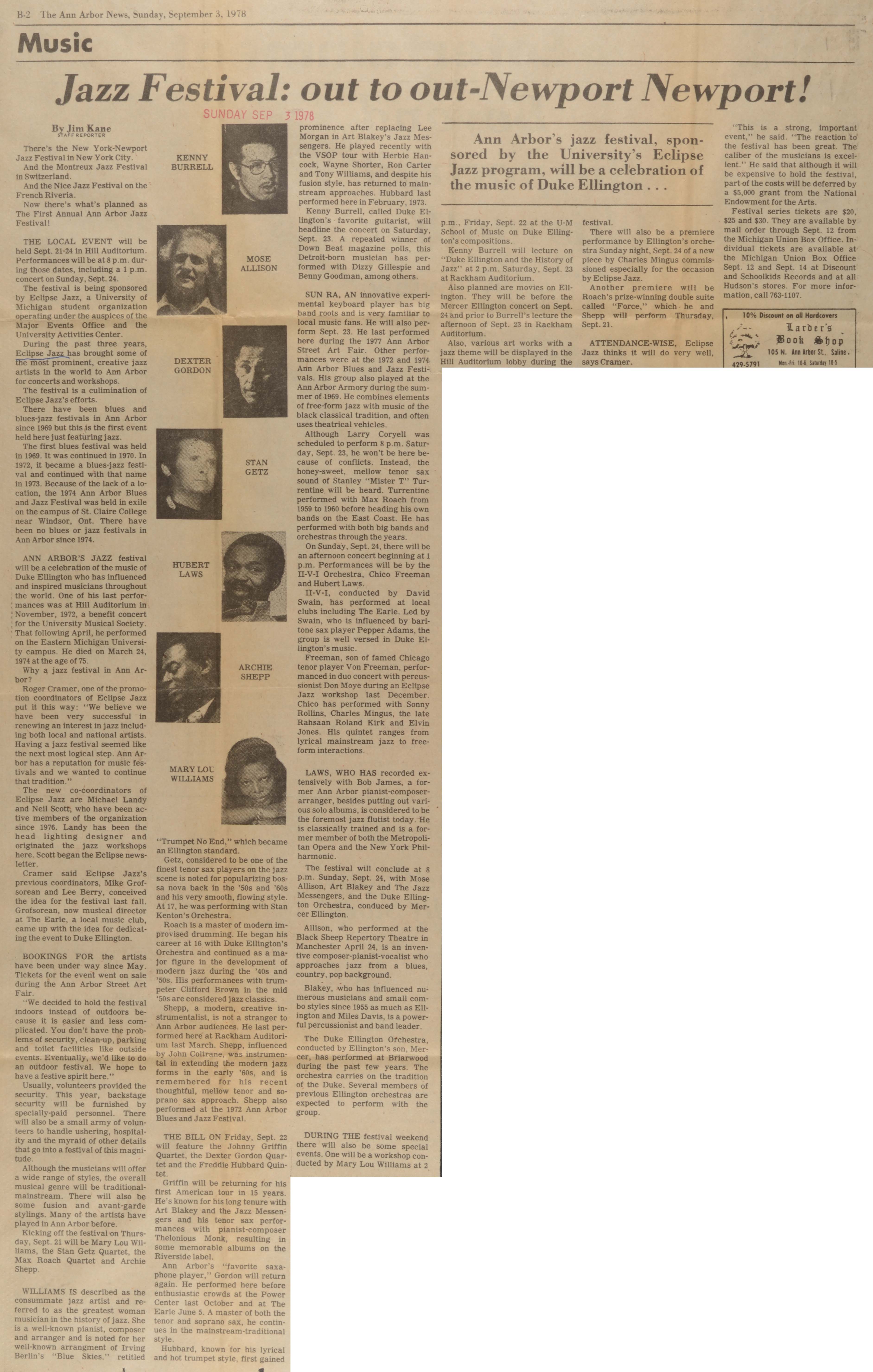 Jazz Festival: out to out-Newport Newport!

And the Montreux Jazz Festival in Switzerland.

And the Nice Jazz Festival on the French Riveria.

THE LOCAL EVENT will be held Sept. 21-24 in Hill Auditorium. Performances will be at 8 p.m. during those dates, including a 1 p.m. concert on Sunday, Sept. 24.

The festival is being sponsored by Eclipse Jazz, a University of Michigan student organization operating under the auspices of the Major Events Office and the University Activities Center.

During the past three years, Eclipse Jazz has brought some of the most prominent, creative jazz artists in the world to Ann Arbor for concerts and workshops.

The festival is a culmination of Eclipse Jazz’s efforts.

There have been blues and blues-jazz festivals in Ann Arbor since 1969 but this is the first event held here just featuring jazz.

ANN ARBOR’S JAZZ festival will be a celebration of the music of Duke Ellington who has influenced and inspired musicians throughout the world. One of his last performances was at Hill Auditorium in November, 1972, a benefit concert ; for the University Musical Society.  That following April, he performed on the Eastern Michigan University campus. He died on March 24, 1974 at the age of 75.

Why a jazz festival in Ann Arbor?

Roger Cramer, one of the promotion coordinators of Eclipse Jazz put it this way: “We believe we have been very successful in renewing an interest in jazz including both local and national artists. Having a jazz festival seemed like the next most logical step. Ann Arbor has a reputation for music festivals and we wanted to continue that tradition.”

The new co-coordinators of Eclipse Jazz are Michael Landy and Neil Scott, who have been active members of the organization since 1976. Landy has been the head lighting designer and originated the jazz workshops here. Scott began the Eclipse newsletter.

Cramer said Eclipse Jazz’s previous coordinators, Mike Grofsorean and Lee Berry, conceived the idea for the festival last fall. Grofsorean, now musical director at The Earle, a local music club, came up with the idea for dedicating the event to Duke Ellington.

BOOKINGS FOR the artists have been under way since May. Tickets for the event went on sale during the Ann Arbor Street Art Fair.

“We decided to hold the festival indoors instead of outdoors because it is easier and less complicated. You don’t have the problems of security, clean-up, parking and toilet facilities like outside events. Eventually, we’d like to do an outdoor festival. We hope to have a festive spirit here.”

Usually, volunteers provided the security. This year, backstage security will be furnished by specially-paid personnel. There will also be a small army of volunteers to handle ushering, hospitality and the myriad of other details that go into a festival of this magnitude.

Although the musicians will offer a wide range of styles, the overall musical genre will be traditional-mainstream. There will also be some fusion and avant-garde stylings. Many of the artists have played in Ann Arbor before.

Kicking off the festival on Thursday, Sept. 21 will be Mary Lou Williams, the Stan Getz Quartet, the Max Roach Quartet and Archie Shepp.

WILLIAMS IS described as the consummate jazz artist and referred to as the greatest woman musician in the history of jazz. She is a well-known pianist, composer and arranger and is noted for her well-known arrangement of Irving Berlin’s “Blue Skies.” retitled “Trumpet No End,” which became an Ellington standard.

Getz, considered to be one of the finest tenor sax players on the jazz scene is noted for popularizing bossa nova back in the ’50s and ’60s and his very smooth, flowing style. At 17, he was performing with Stan Kenton’s Orchestra.

Roach is a master of modern improvised drumming. He began his career at 16 with Duke Ellington’s Orchestra and continued as a major figure in the development of modern jazz during the ’40s and '50s. His performances with trumpeter Clifford Brown in the mid '50s are considered jazz classics.

Shepp, a modern, creative instrumentalist, is not a stranger to Ann Arbor audiences. He last performed here at Rackham Auditorium last March. Shepp, influenced by John Coltrane, was instrumental in extending the modern jazz forms in the early ’60s, and is remembered for his recent thoughtful, mellow tenor and soprano sax approach. Shepp also performed at the 1972 Ann Arbor Blues and Jazz Festival.

THE BILL ON Friday, Sept. 22 will feature the Johnny Griffin Quartet, the Dexter Gordon Quartet and the Freddie Hubbard Quintet.

Griffin will be returning for his first American tour in 15 years.  He's known for his long tenure with Art Blakey and the Jazz Messengers and his tenor sax performances with pianist-composer Thelonious Monk, resulting in some memorabel albums on the Riverside label.

Ann Arbor's "favorite saxaphone," Gordon will return again.  He performed here before enthusiastic crowds at the Power Center lawst October and at The Earle June 5.  A master of both the tenor and soprano sax, he continues in the mainstream-traditional style.

Kenny Burrell, called Duke Ellington’s favorite guitarist, will headline the concert on Saturday, Sept. 23. A repeated winner of Down Beat magazine polls, this Detroit-born musician has performed with Dizzy Gillespie and Benny Goodman, among others.

SUN RA, AN innovative experimental keyboard player has big band roots and is very familiar to local music fans. He will also perform Sept. 23. He last performed here during the 1977 Ann Arbor Street Art Fair. Other performances were at the 1972 and 1974 Ann Arbor Blues and Jazz Festivals. His group also played at the Ann Arbor Armory during the summer of 1969. He combines elements of free-form jazz with music of the black classical tradition, and often uses theatrical vehicles.

Although Larry Coryell was scheduled to perform 8 p.m. Saturday, Sept. 23, he won’t be here because of conflicts. Instead, the honey-sweet, mellow tenor sax sound of Stanley “Mister T” Turrentine will be heard. Turrentine performed with Max Roach from 1959 to 1960 before heading his own bands on the East Coast. He has performed with both big bands and orchestras through the years.

On Sunday, Sept. 24, there will be an afternoon concert beginning at 1 p.m. Performances will be by the II-V-I Orchestra, Chico Freeman and Hubert Laws.

II-V-I, conducted by David Swain, has performed at local clubs including The Earle. Led by Swain, who is influenced by baritone sax player Pepper Adams, the group is well versed in Duke Ellington’s music.

LAWS, WHO HAS recorded extensively with Bob James, a former Ann Arbor pianist-composer-arranger, besides putting out various solo albums, is considered to be the foremost jazz flutist today. He is classically trained and is a former member of both the Metropolitan Opera and the New York Philharmonic.

The festival will conclude at 8 p.m. Sunday, Sept. 24, with Mose Allison, Art Blakey and The Jazz Messengers, and the Duke Ellington Orchestra, conduced by Mercer Ellington.

Allison, who performed at the Black Sheep Repertory Theatre in Manchester April 24, is an inventive composer-pianist-vocalist who approaches jazz from a blues, country, pop background.

Blakey, who has influenced numerous musicians and small combo styles since 1955 as much as Ellington and Miles Davis, is a powerful percussionist and band leader.

The Duke Ellington Orchestra, conducted by Ellington’s son, Mercer, has performed at Briarwood during the past few years. The orchestra carries on the tradition of the Duke. Several members of previous Ellington orchestras are expected to perform with the group.

DURING THE festival weekend there will also be some special events.  One will be a workshop conducted by Mary Lou Williams at 2 p.m., Friday, Sept. 22 at the U-M School of Music on Duke Ellington’s compositions.

Kenny Burrell will lecture on “Duke Ellington and the History of Jazz” at 2 p.m. Saturday, Sept. 23 at Rackham Auditorium.

Also planned are movies on Ellington. They will be before the Mercer Ellington concert on Sept. 24 and prior to Burrell’s lecture the afternoon of Sept. 23 in Rackham Auditorium.

Also, various art works with a jazz theme will be displayed in the Hill Auditorium lobby during the festival.

There will also be a premiere performance by Ellington’s orchestra Sunday night. Sept. 24 of a new piece by Charles Mingus commissioned especially for the occasion by Eclipse Jazz.

Another premiere will he Roach’s prize-winning double suite called “Force,” which he and Shepp will perform Thursday, Sept. 21.

“This is a strong, important event,” he said. “The reaction to' the festival has been great. The caliber of the musicians is excellent.” He said that although it will be expensive to hold the festival, part of the costs will be deferred by a $5,000 grant from the National Endowment for the Arts.

Ann Arbor’s jazz festival, sponsored by the University’s Eclipse Jazz program, will be a celebration of the music of Duke Ellington ...