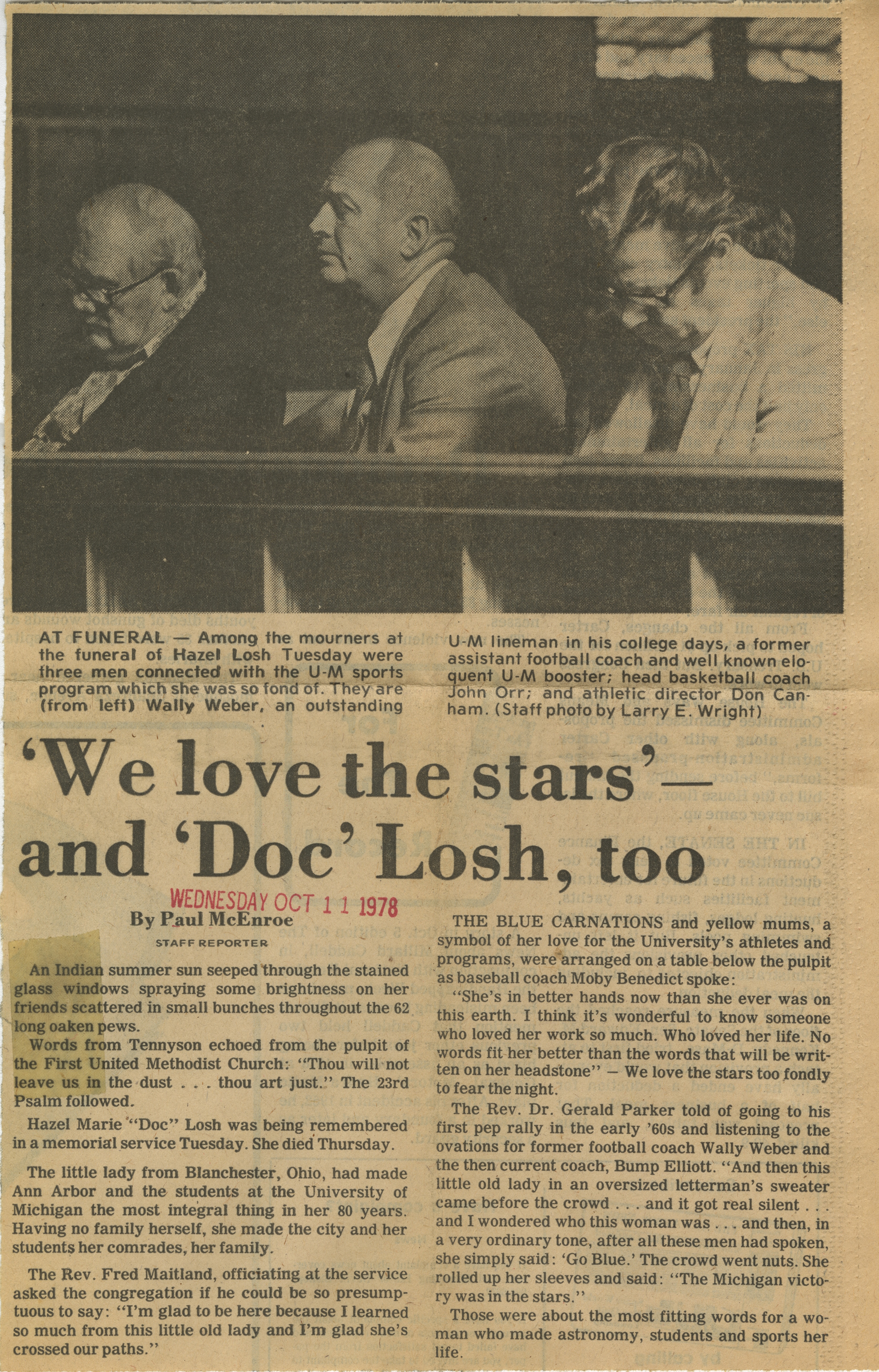 ﻿AT FUNERAL — Among the mourners at the funeral of Hazel Losh Tuesday were three men connected with the U-M sports program which she was so fond of. They are {from left) Wally Weber, an outstanding U-M lineman in his college days, a former assistant football coach and well known eloquent U-M booster; head basketball coach John Orr; and athletic director Don Canham. (Staff photo by Larry E. Wright)

An Indian summer sun seeped through the stained glass windows spraying some brightness on her friends scattered in small bunches throughout the 62 long oaken pews.

Words from Tennyson echoed from the pulpit of the First United Methodist Church; “Thou will not leave us in the dust . . . thou art just.” The 23rd Psalm followed.

Hazel Marie '“Doc” Losh was being remembered in a memorial service Tuesday. She died Thursday.

The little lady from Blanchester, Ohio, had made Ann Arbor and the students at the University of Michigan the most integral thing in her 80 years. Having no family herself, she made the city and her students her comrades, her family.

The Rev. Fred Maitland, officiating at the service asked the congregation if he could be so presumptuous to say; “I’m glad to be here because I learned so much from this little old lady and I’m glad she’s crossed our paths.”

THE BLUE CARNATIONS and yellow mums, a symbol of her love for the University’s athletes and programs, were arranged on a table below the pulpit as baseball coach Moby Benedict spoke:

“She’s in better hands now than she ever was on this earth. I think it’s wonderful to know someone who loved her work so much. Who loved her life. No words fit her better than the words that will be written on her headstone” - We love the stars too fondly to fear the night.

The Rev. Dr. Gerald Parker told of going to his first pep rally in the early ’60s and listening to the ovations for former football coach Wally Weber and the then current coach, Bump Elliott. “And then this little old lady in an oversized letterman’s sweater came before the crowd . . . and it got real silent . . . and I wondered who this woman was ... and then, in a very ordinary tone, after all these men had spoken, she simply said: ‘Go Blue.’ The crowd went nuts. She rolled up her sleeves and said: “The Michigan victory was in the stars.”

Those were about the most fitting words for a woman who made astronomy, students and sports her life.