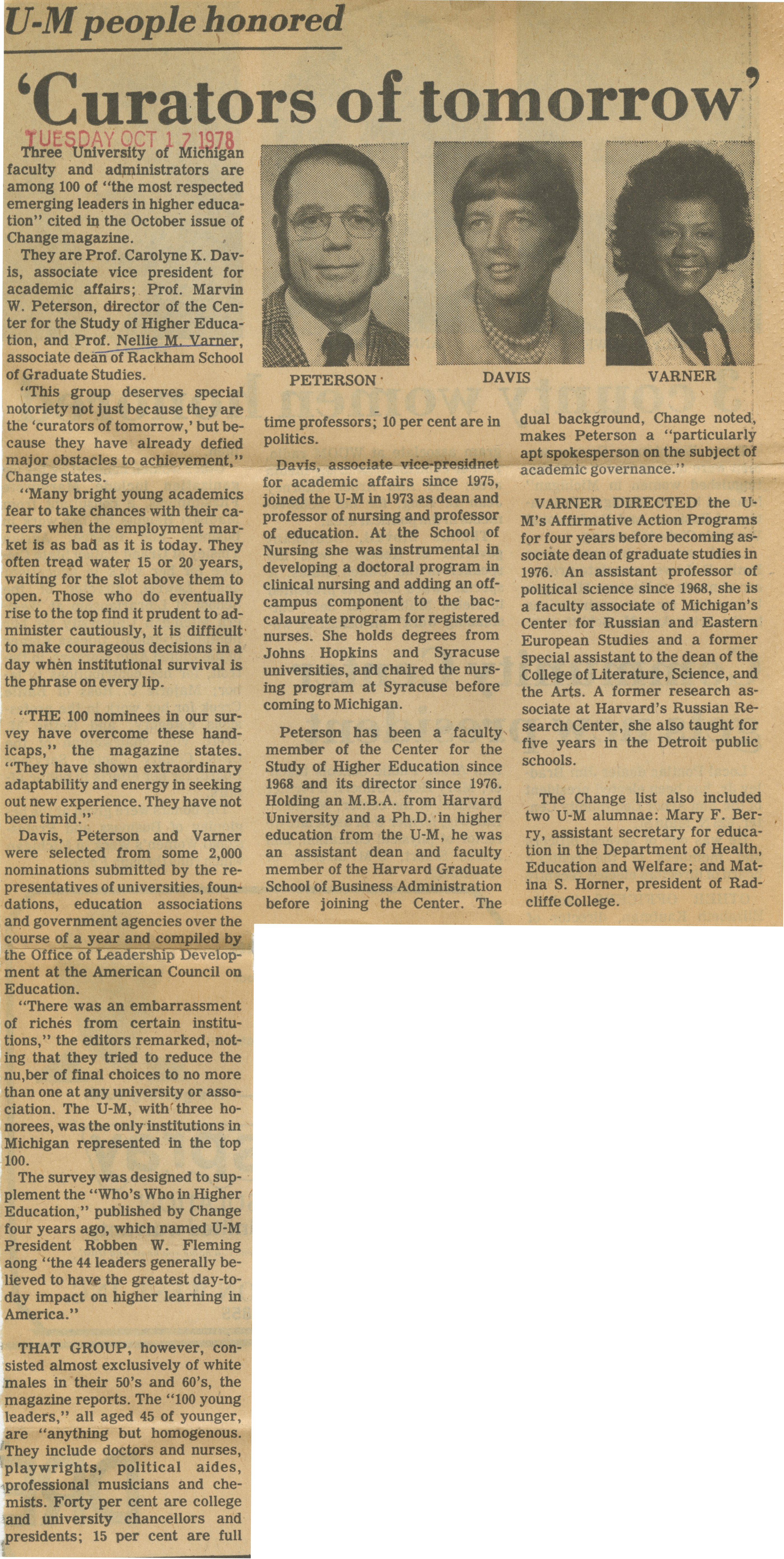 Three University of Michigan faculty and administrators are among 100 of “the most respected emerging leaders in higher education” cited in the October issue of Change magazine.

“This group deserves special notoriety not just because they are the 'curators of tomorrow,’ but because they have already defied major obstacles to achievement,” Change states.

“Many bright young academics fear to take chances with their careers when the employment market is as bad as it is today. They often tread water 15 or 20 years, waiting for the slot above them to open. Those who do eventually rise to the top find it prudent to administer cautiously, it is difficult to make courageous decisions in a day when institutional survival is the phrase on every lip.

“THE 100 nominees in our survey have overcome these handicaps,” the magazine states. “They have shown extraordinary adaptability and energy in seeking out new experience. They have not been timid.”

Davis, Peterson and Varner were selected from some 2,000 nominations submitted by the representatives of universities, foundations, education associations and government agencies over the course of a year and compliled by the Office of Leadership Development at the American Council on Education.

“There was an embarrassment of riches from certain institutions,” the editors remarked, noting that they tried to reduce the number of final choices to no more than one at any university or association. The U-M, with three honorees, was the only institutions in Michigan represented in the top 100.

The survey was designed to supplement the “Who’s Who in Higher Education,” published by Change four years ago, which named U-M President Robben W. Fleming among “the 44 leaders generally believed to have the greatest day-to-day impact on higher learning in America.”

THAT GROUP, however, consisted almost exclusively of white males in their 50’s and 60’s, the magazine reports. The “100 young leaders,” all aged 45 of younger, are "anything but homogenous. They include doctors and nurses, playwrights, political aides, professional musicians and chemists. Forty per cent are college and university chancellors and presidents; 15 per cent are full time professors; 10 per cent are in politics.

Davis, associate vice-president for academic affairs since 1975, joined the U-M in 1973 as dean and professor of nursing and professor of education. At the School of Nursing she was instrumental in developing a doctoral program in clinical nursing and adding an off-campus component to the baccalaureate program for registered nurses. She holds degrees from Johns Hopkins and Syracuse universities, and chaired the nursing program at Syracuse before coming to Michigan.

Peterson has been a faculty member of the Center for the Study of Higher Education since 1968 and its director since 1976. Holding an M.B.A. from Harvard University and a Ph.D. in higher education from the U-M, he was an assistant dean and faculty member of the Harvard Graduate School of Business Administration before joining the Center. The dual background, Change noted, makes Peterson a “particularly apt spokesperson on the subject of academic governance.”

VARNER DIRECTED the U-M’s Affirmative Action Programs for four years before becoming associate dean of graduate studies in 1976. An assistant professor of political science since 1968, she is a faculty associate of Michigan’s Center for Russian and Eastern European Studies and a former special assistant to the dean of the College of Literature, Science, and the Arts. A former research associate at Harvard’s Russian Research Center, she also taught for five years in the Detroit public schools.