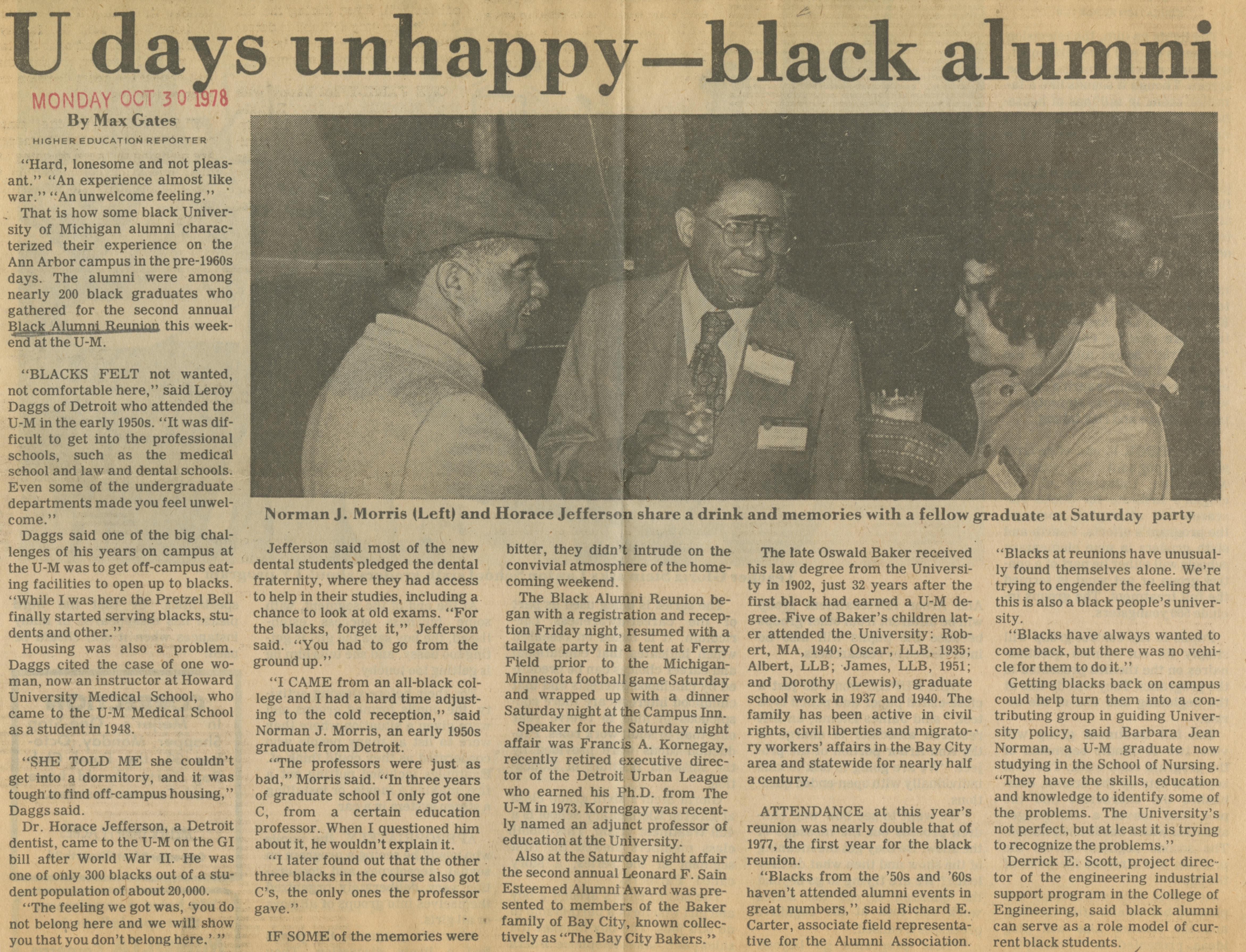 “Hard, lonesome and not pleasant.” “An experience almost like war.” “An unwelcome feeling.”

That is how some black University of Michigan alumni characterized their experience on the Ann Arbor campus in the pre-1960s days. The alumni were among nearly 200 black graduates who gathered for the second annual Black Alumni Reunion this weekend at the U-M.

“BLACKS FELT not wanted, not comfortable here,” said Leroy Daggs of Detroit who attended the U-M in the early 1950s. “It was difficult to get into the professional schools, such as the medical school and law and dental schools. Even some of the undergraduate departments made you feel unwelcome.”

Daggs said one of the big challenges of his years on campus at the U-M was to get off-campus eating facilities to open up to blacks. “While I was here the Pretzel Bell finally started serving blacks, students and other.”

Housing was also a problem. Daggs cited the case of one woman, now an instructor at Howard University Medical School, who came to the U-M Medical School as a student in 1948.

“SHE TOLD ME she couldn’t get into a dormitory, and it was tough to find off-campus housing,” Daggs said.

Dr. Horace Jefferson, a Detroit dentist, came to the U-M on the GI bill after World War II. He was one of only 300 blacks out of a student population of about 20,000.

“The feeling we got was, ‘you do not belong here and we will show you that you don’t belong here.’ ”

Jefferson said most of the new dental students pledged the dental fraternity, where they had access to help in their studies, including a chance to look at old exams. “For the blacks, forget it,” Jefferson said. “You had to go from the ground up.”

“I CAME from an all-black college and I had a hard time adjusting to the cold reception,” said Norman J. Morris, an early 1950s graduate from Detroit.

“The professors were just as bad,” Morris said. “In three years of graduate school I only got one C, from a certain education professor. When I questioned him about it, he wouldn’t explain it.

“I later found out that the other three blacks in the course also got C’s, the only ones the professor gave.”

IF SOME of the memories were bitter, they didn’t intrude on the convivial atmosphere of the homecoming weekend.

The Black Alumni Reunion began with a registration and reception Friday night, resumed with a tailgate party in a tent at Ferry Field prior to the Michigan-Minnesota football game Saturday and wrapped up with a dinner Saturday night at the Campus Inn.

Speaker for the Saturday night affair was Francis A. Kornegay, recently retired executive director of the Detroit Urban League who earned his Ph.D. from The U-M in 1973. Kornegay was recently named an adjunct professor of education at the University.

Also at the Saturday night affair the second annual Leonard F. Sain Esteemed Alumni Award was presented to members of the Baker family of Bay City, known collectively as “The Bay City Bakers.”

The late Oswald Baker received his law degree from the University in 1902, just 32 years after the first black had earned a U-M degree. Five of Baker’s children later attended the University: Robert, MA, 1940; Oscar, LLB, 1935; Albert, LLB; James, LLB, 1951; and Dorothy (Lewis), graduate school work in 1937 and 1940. The family has been active in civil rights, civil liberties and migratory workers’ affairs in the Bay City area and statewide for nearly half a century.

ATTENDANCE at this year’s reunion was nearly double that of 1977, the first year for the black reunion.

“Blacks at reunions have unusually found themselves alone. We’re trying to engender the feeling that this is also a black people’s university.

“Blacks have always wanted to come back, but there was no vehicle for them to do it.”

Getting blacks back on campus could help turn them into a contributing group in guiding University policy, said Barbara Jean Norman, a U-M graduate now studying in the School of Nursing. “They have the skills, education and knowledge to identify some of the problems. The University’s not perfect, but at least it is trying to recognize the problems.”

Derrick E. Scott, project director of the engineering industrial support program in the College of Engineering, said black alumni can serve as a role model of current black students.