Estate sale: A walk into the past 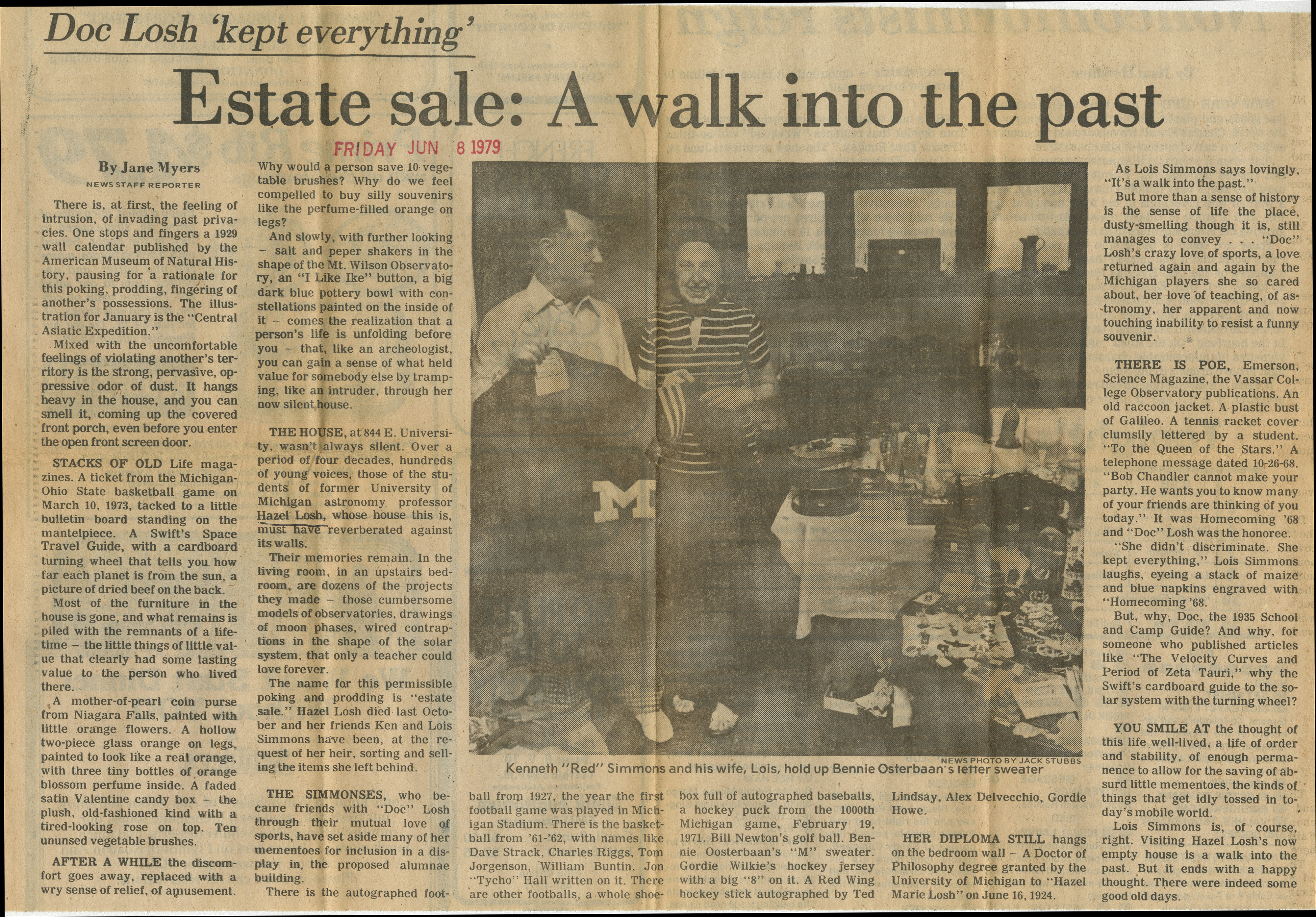 Estate sale: A walk into the past

Mixed with the uncomfortable feelings of violating another’s territory is the strong, pervasive, oppressive odor of dust. It hangs heavy in the house, and you can smell it, coming up the covered front porch, even before you enter the open front screen door.

STACKS OF OLD Life magazines. A ticket from the Michigan-Ohio State basketball game on March 10, 1973. tacked to a little bulletin board standing on the mantelpiece. A Swift’s Space Travel Guide, with a cardboard turning wheel that tells you how far each planet is from the sun, a picture of dried beef on the back.

Most of the furniture in the house is gone, and what remains is piled with the remnants of a lifetime -- the little thing of little value that clearly had some lasting value to the person who lived there.

AFTER A WHILE the discomfort goes away, replaced with a wry sense of relief, of amusement.

Why would a person save 10 vegetable brushes? Why do we feel compelled to buy silly souvenirs like the perfume-filled orange on legs?

And slowly, with further looking - salt and pepper shakers in the shape of the Mt. Wilson Observatory, an “I Like Ike” button, a big dark blue pottery bowl with constellations painted on the inside of it -- comes, the realization that a person’s life is unfolding before you -- that, like an archeologist, you can gain a sense of what held value for somebody else by tramping, like an intruder, through her now silent house.

THE HOUSE, at 844 E. University, wasn't always silent. Over a period of four decades, hundreds of young voices, those of the students of former University of Michigan astronomy professor Hazel Losh, whose house this is, must have reverberated against its walls.

Their memories remain. In the living room, in an upstairs bedroom, are dozens of the projects they made -- those cumbersome models of observatories, drawings of moon phases, wired contraptions in the shape of the solar system, that only a teacher could love forever.

The name for this permissible poking and prodding is "estate sale." Hazel Losh died last October and her friends Ken and Lois Simmons have been, at the request of her heir, sorting and selling the items she left behind.

THE SIMMONSES, who became friends with "Doc” Losh through their mutual love of sports, have set aside many of her mementoes for inclusion in a display in the proposed alumnae building.

There is the autographed football from 1927, the year the first football game was played in Michigan Stadium. There is the basketball from ’61-’62, with names Dave Strack, Charles Riggs, Tom Jorgenson, William Buntin, Jon "Tycho" Hall written on it. There with a are other footballs, a whole shoebox full of autographed baseballs, a hockey puck from the 1000th Michigan game, February 19,1971. Bill Newton's golf ball. Bennie Oosterbaan's "M" sweater. Gordie Wilkie's hockey jersey with a big "8" on it. A Red Wing hockey stick autographed by Ted Lindsay, Alex Delvecchio, Gordie Howe.

HER DIPLOMA STILL hangs on the bedroom wall -- A Doctor of Philosophy degree granted by the University of Michigan to "Hazel Marie Losh" on June 16, 1924.

As Lois Simmons says lovingly, “It’s a walk into the past."

But more than a sense of history is the sense of life the place, dusty-smelling though it is, still manages to convey . . . "Doc Losh’s crazy love of sports, a lot returned again and again by the Michigan players she so cared about, her love of teaching, of astronomy, her apparent and now touching inability to resist a funny souvenir.

THERE IS POE, Emerson, Science Magazine, the Vassar College Observatory publications. An old raccoon jacket. A plastic bust of Galileo. A tennis racket cover clumsily lettered by a student. "To the Queen of the Stars.” A telephone message dated 10-26-68. "Bob Chandler cannot make your party. He wants you to know many of your friends are thinking of you today." It was Homecoming '68 and "Doc" Losh was the honoree.

"She didn’t discriminate. She kept everything." Lois Simmons laughs, eyeing a stack of maize-and blue napkins engraved with "Homecoming '68".

But, why, Doc, the 1935 School and Camp Guide? And why, for someone who published articles like "The Velocity Curves and Period of Zeta Tauri," why the Swift’s cardboard guide to the solar system with the turning wheel?

YOU SMILE AT the thought of this life well-lived, a life of order and stability, of enough permanence to allow for the saving of absurd little mementoes, the kinds of things that get idly tossed in today's mobile world.

Lois Simmons is, of course, right. Visiting Hazel Losh's now empty house is a walk into the past. But it ends with a happy thought. There were indeed some good old days.