No Appeal In Murder Case 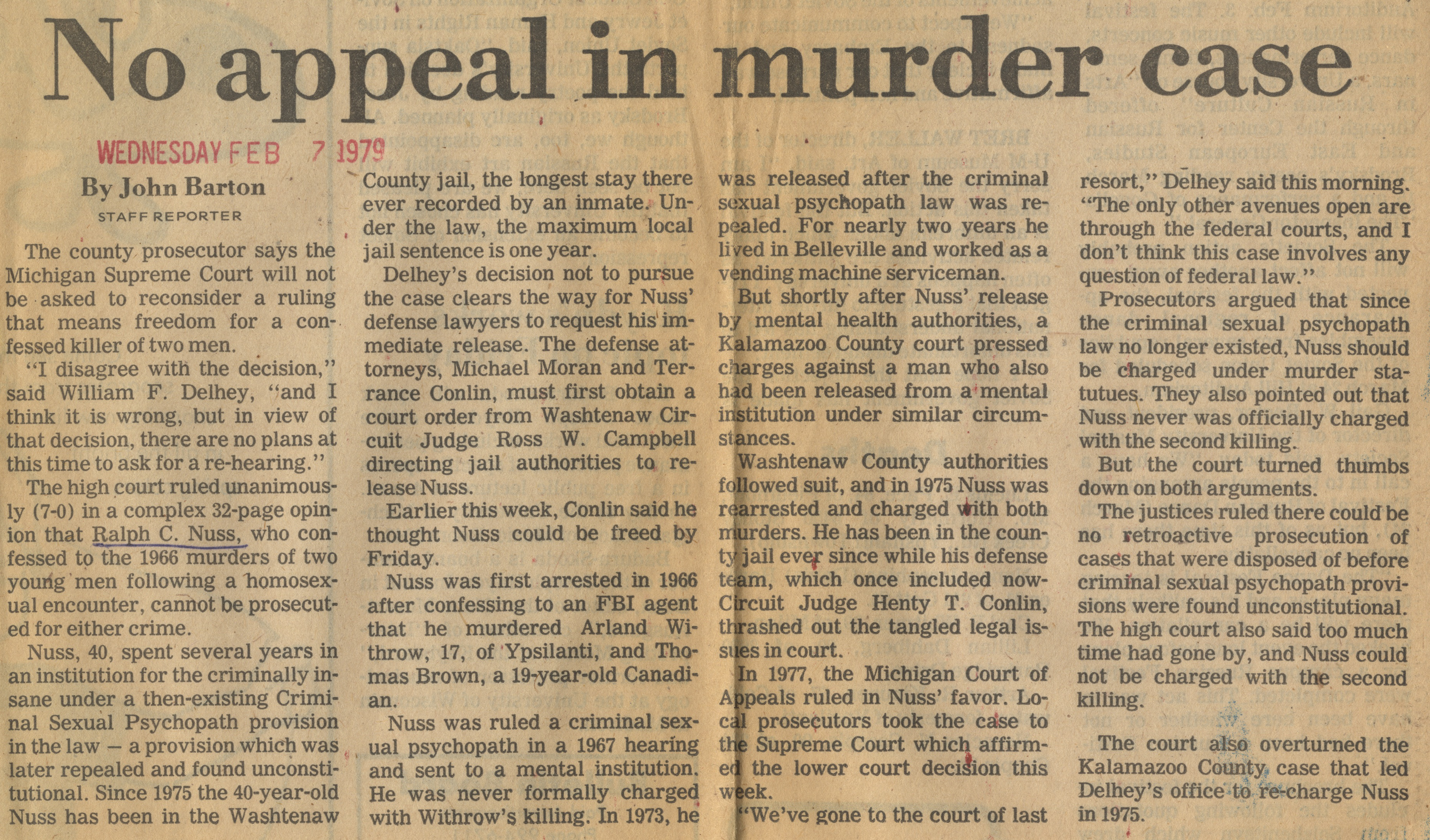 ﻿No appeal in murder case

The county prosecutor says the Michigan Supreme Court will not be asked to reconsider a ruling that means freedom for a confessed killer of two men.

“I disagree with the decision,” said William F. Delhey, “and I think it is wrong, but in view of that decision, there are no plans at this time to ask for a re-hearing.’’

The high court ruled unanimously (7-0) in a complex 32-page opinion that Ralph C. Nuss, who confessed to the 1966 murders of two young men following a homosexual encounter, cannot be prosecuted for either crime.

Nuss, 40, spent several years in an institution for the criminally insane under a then-existing Criminal Sexual Psychopath provision in the law -- a provision which was later repealed and found unconstitutional. Since 1975 the 40-year-old Nuss has been in the Washtenaw County jail, the longest stay there ever recorded by an inmate. Under the law, the maximum local jail sentence is one year.

Earlier this week, Conlin said he thought Nuss could be freed by Friday.

Nuss was first arrested in 1966 after confessing to an FBI agent that he murdered Arland Withrow, 17, of Ypsilanti, and Thomas Brown, a 19-year-old Canadian.

But shortly after Nuss’ release by mental health authorities, a Kalamazoo County court pressed charges against a man who also had been released from a mental institution under similar circumstances.

Washtenaw County authorities followed suit, and in 1975 Nuss was rearrested and charged with both murders. He has been in the county jail ever since while his defense team, which once included now Circuit Judge Henty T. Conlin, thrashed out the tangled legal issues in court.

In 1977, the Michigan Court of Appeals ruled in Nuss’ favor. Local prosecutors took the case to the Supreme Court which affirmed the lower court decision this week.

‘We’ve gone to the court of last resort,” Delhey said this morning. “The only other avenues open are through the federal courts, and I don’t think this case involves any question of federal law.”

Prosecutors argued that since the criminal sexual psychopath law no longer existed, Nuss should be charged under murder statutes. They also pointed out that Nuss never was officially charged with the second killing.

But the court turned thumbs down on both arguments.

The justices ruled there could be no retroactive prosecution of cases that were disposed of before criminal sexual psychopath provisions were found unconstitutional. The high court also said too much time had gone by, and Nuss could not be charged with the second killing.

The court also overturned the Kalamazoo County case that led Delhey’s office to re-charge Nuss in 1975.