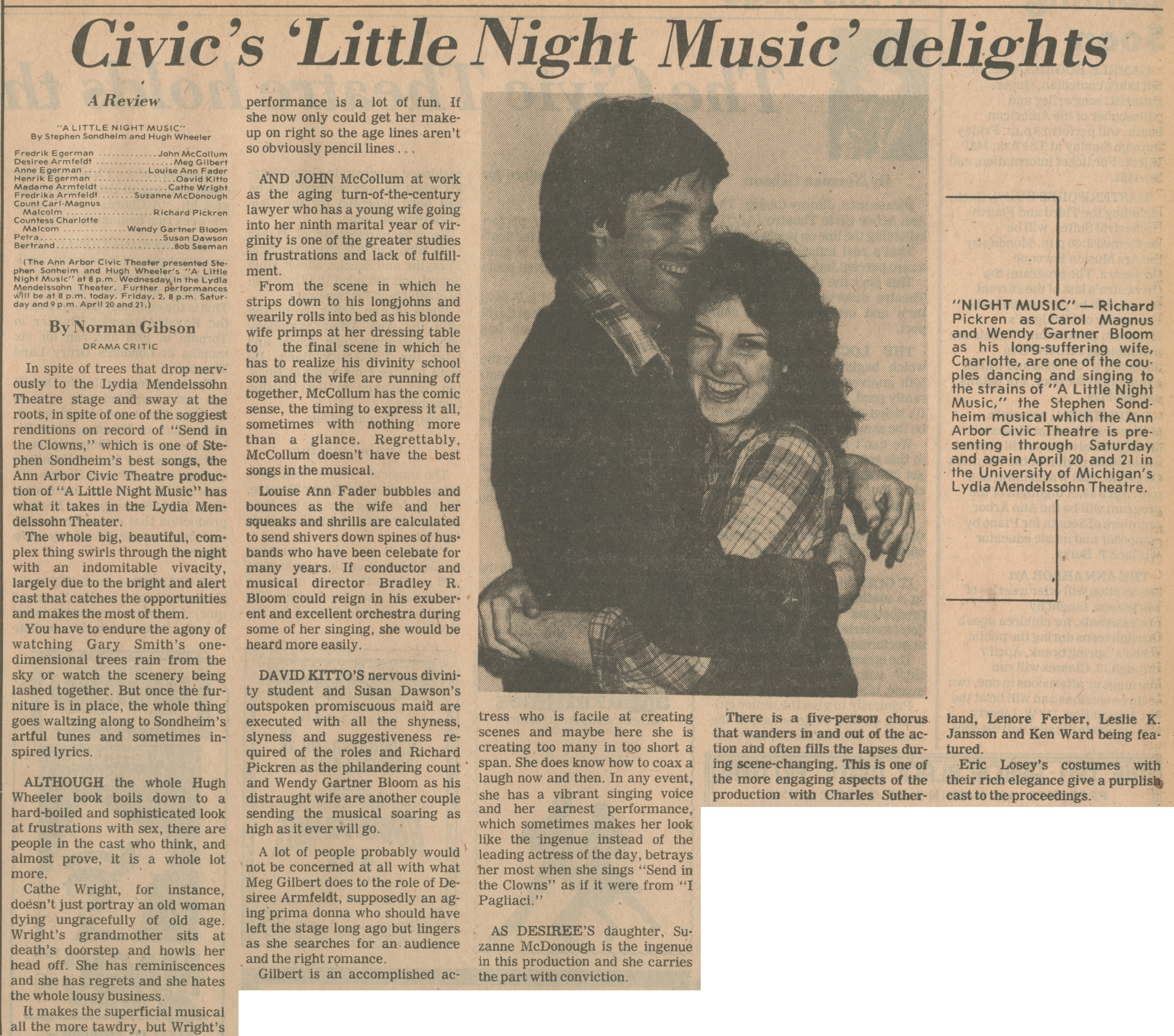 By Stephen Sondheim and Hugh Wheeler

The whole big, beautiful, complex thing swirls through the night with an indomitable vivacity, largely due to the bright and alert cast that catches the opportunities and makes the most of them.

You have to endure the agony of watching Gary Smith’s one dimensional trees rain from the sky or watch the scenery being lashed together. But once the furniture is in place, the whole thing goes waltzing along to Sondheim’s artful tunes and sometimes inspired lyrics.

ALTHOUGH the whole Hugh Wheeler book boils down to a hard-boiled and sophisticated look at frustrations with sex, there are people in the cast who think, and almost prove, it is a whole lot more.

Cathe Wright, for instance, doesn’t just portray an old woman dying ungracefully of old age. Wright’s grandmother sits at death’s doorstep and howls her head off. She has reminiscences and she has regrets and she hates the whole lousy business.

It makes the superficial musical all the more tawdry, but Wright’s performance is a lot of fun. If she now only could get her makeup on right so the age lines aren’t so obviously pencil lines...

AND JOHN McCollum at work as the aging turn-of-the-century lawyer who has a young wife going into her ninth marital year of virginity is one of the greater studies in frustrations and lack of fulfillment.

From the scene in which he strips down to his longjohns and wearily rolls into bed as his blonde wife primps at her dressing table to the final scene in which he has to realize his divinity school son and the wife are running off together, McCollum has the comic sense, the timing to express it all, sometimes with nothing more than a glance. Regrettably, McCollum doesn’t have the best songs in the musical.

Louise Ann Fader bubbles and bounces as the wife and her squeaks and shrills are calculated to send shivers down spines of husbands who have been celebrate for many years. If conductor and musical director Bradley R. Bloom could reign in his exuberant and excellent orchestra during some of her singing, she would be heard more easily.

DAVID KITTO’S nervous divinity student and Susan Dawson’s outspoken promiscuous maid are executed with all the shyness, slyness and suggestiveness required of the roles and Richard Pickren as the philandering count and Wendy Gartner Bloom as his distraught wife are another couple sending the musical soaring as high as it ever will go.

A lot of people probably would not be concerned at all with what Meg Gilbert does to the role of Desiree Armfeldt, supposedly an aging prima donna who should have left the stage long ago but lingers as she searches for an audience and the right romance.

Gilbert is an accomplished actress who is facile at creating scenes and maybe here she is creating too many in too short a span. She does know how to coax a laugh now and then. In any event, she has a vibrant singing voice and her earnest performance, which sometimes makes her look like the ingenue instead of the leading actress of the day, betrays her most when she sings “Send in the Clowns” as if it were from “I Pagliaci.”

AS DESIREE’S daughter, Suzanne McDonough is the ingenue in this production and she carries the part with conviction.

There is a five-person chorus that wanders in and out of the action and often fills the lapses during scene-changing. This is one of the more engaging aspects of the production with Charles Sutherland, Lenore Ferber, Leslie K. Jansson and Ken Ward being featured.

Eric Losey’s costumes with their rich elegance give a purplish cast to the proceedings.

"NIGHT MUSIC" — Richard Pickren as Carol Magnus and Wendy Gartner Bloom as his long-suffering wife, Charlotte, are one of the couples dancing and singing to the strains of "A Little Night Music," the Stephen Sondheim musical which the Ann Arbor Civic Theatre is presenting through Saturday and again April 20 and 21 in the University of Michigan's Lydia Mendelssohn Theatre.