A refuge for artists 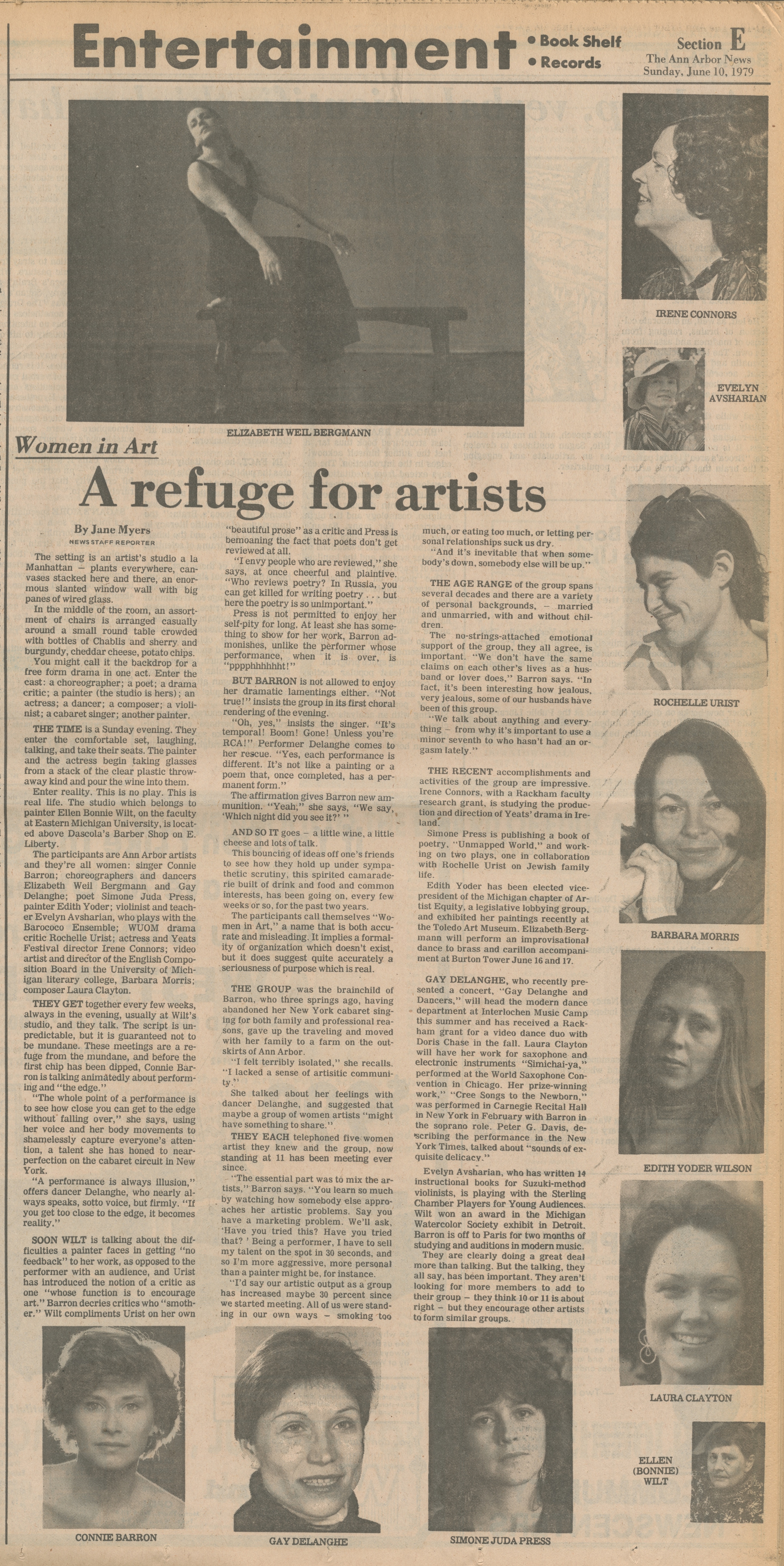 A refuge for artists

The setting is an artist's studio a la Manhattan - plants everywhere, canvases stacked here and there, an enormous slanted window wall with big panes of wired glass.

In the middle of the room, an assortment of chairs is arranged casually around a small round table crowded with bottles of Chablis and sherry and burgundy, cheddar cheese, potato chips.

You might call it the backdrop for a free form drama in one act.  Enter the cast: a choreographer; a poet; a drama critic; a painter (the studio is her); an actress; a dancer; a composer; a violinist; a cabaret singer; another painter.

Enter reality. This Is no play. This is real life. The studio which belongs to painter Ellen Bonnie Wilt, on the faculty at Eastern Michigan University, is located above Dascola's Barber Shop on E. Liberty.

THEY GET together every few weeks, always in the evening, usually at Wilt's studio, and they talk. The script is unpredictable, but it is guaranteed not to be mundane.  These meetings are a refuge from the mundane, and before the first chip has been dipped, Connie Barron is talking animatedly about performing and "the edge."

"The whole point of performance is to see how close you can get to the edge without falling over," she says, using her voice and her body movements to shamelessly capture everyone's attention, a talent she has honed to near-perfection on the cabaret circuit in New York.

"A performance is always illusion," offers dancer Delanghe, who nearly always speaks, sotto voice, but firmly. "If you get too close to the edge, it becomes reality."

SOON WILT is talking about the difficulties a painter faces in getting "no feedback" to her work, as opposed to the performer with an audience, and Urist has introduced the notion of a critic as one "whose function is to encourage art."  Barron decries critic who "smother." Wilt compliments Urist on her own “beautiful prose” as a critic and Press is bemoaning the fact that poets don't get reviewed at all.

“I envy people who are reviewed,” she says, at once cheerful and plaintive. “Who reviews poetry? In Russia, you can get killed for writing poetry . . . but here the poetry is so unimportant.”

Press is not permitted to enjoy her self-pity for long. At least she has something to show for her work, Barron admonishes, unlike the performer whose performance, when it is over, is "pppphhhhhht!"

BUT BARRON is not allowed to enjoy her dramatic lamentings either. "Not true! ” Insists the group In its first choral rendering of the evening.

"Oh, yes,” insists the singer. "It's temporal! Boom! Gone! Unless you're RCA!" Performer Delanghe comes to her rescue. “Yes, each performance is different. It’s not like a painting or a poem that, once completed, has a permanent form.”

The affirmation gives Barron new ammunition. "Yeah,” she says, "We say, 'Which night did you see it?’”

AND SO IT goes - a little wine, a little cheese and lots of talk.

This bouncing of ideas off one's friends to see how they hold up under sympathetic scrutiny, this spirited camaraderie built of drink and food and common interests, has been going on, every few weeks or so, for the past two years.

The participants call themselves "Women in Art," a name that is both accurate and misleading.  It implies a formality of organization which doesn't exist, but it does suggest quite accurately a seriousness of purpose which is real.

THE GROUP was the brainchild of Barron, who three springs ago, having abandoned her New York cabaret singing for both family and professional reasons, gave up the traveling and moved with her family to a farm on the outskirts of Ann Arbor.

"I felt terribly isolated," she recalls. "I lacked a sense of artistic community."

She talked about her feelings with dance Delanghe, and suggested that maybe a group of women artists "might have something to share."

THEY EACH telephoned five women artist they knew and the group, now standing at 11 has been meeting ever since.

"The essential part was to mix the artists," Barron says. "You learn so much by watching how somebody else approaches her artistic problems.  Say you have a marketing problem.  We'll ask, 'Have you tried this? Have you tried that?' Being a performer, I have to sell my talent on the spot in 30 seconds, and so I'm more aggressive, more personal than a painter might be, for instance.

"I'd say our artistic output as a group has increased maybe 30 percent since we started meeting.  All of us were standing in our own ways - smoking too much, or eating too much, or letting personal relationships suck us dry.

"And it’s inevitable that when somebody’s down, somebody else will be up.”

THE AGE RANGE of the group spans several decades and there are a variety of personal backgrounds, - married and unmarried, with and without children.

The no-strings-attached emotional support of the group, they all agree, is important. "We don't have the same claims on each other’s lives as a husband or lover does.” Barron says. "In fact, it's been interesting how jealous, very jealous, some of our husbands have been of this group.

"We talk about anything and everything - from why it's important to use a minor seventh to who hasn't had an orgasm lately.”

THE RECENT accomplishments and activities of the group are impressive. Irene Connors, with a Rackham faculty research grant, is studying the production and direction of Yeats' drama in Ireland.

Simone Press is publishing a book of poetry, "Unmapped World." and working on two plays, one in collaboration with Rochelle Urist on Jewish family life.

Edith Yoder has been elected vice-president of the Michigan chapter of Artist Equity, a legislative lobbying group, and exhibited her paintings recently at the Toledo Art Museum. Elizabeth Bergmann will perform an improvisational dance to brass and carillon accompaniment at Burton Tower June 16 and 17.

GAY DELANGHE, who recently presented a concert. “Gay Delanghe and Dancers," will head the modern dance department at Interlochen Music Camp this summer and has received a Rackham grant for a video dance duo with Doris Chase in the fall. Laura Clayton will have her work for saxophone and electronic instruments "Simichai-ya," performed at the World Saxophone Convention in Chicago. Her prize-winning work, "Cree Songs to the Newborn," was performed in Carnegie Recital Hall in New York in February with Barron in the soprano role. Peter G. Davis, describing the performance in the New York Times, talked about "sounds of exquisite delicacy.”

Evelyn Avsharian, who has written 14 instructional books for Suzuki-method violinists, is playing with the Sterling Chamber Players for Young Audiences. Wilt won an award in the Michigan Watercolor Society exhibit in Detroit. Barron is off to Paris for two months of studying and auditions in modem music.

They are clearly doing a great deal more than talking. But the talking, they all say, has been important. They aren't looking for more members to add to their group - they think 10 or 11 is about right - but they encourage other artists to form similar groups.