Guest Viewpoint: Toward A Better Understanding of Black English 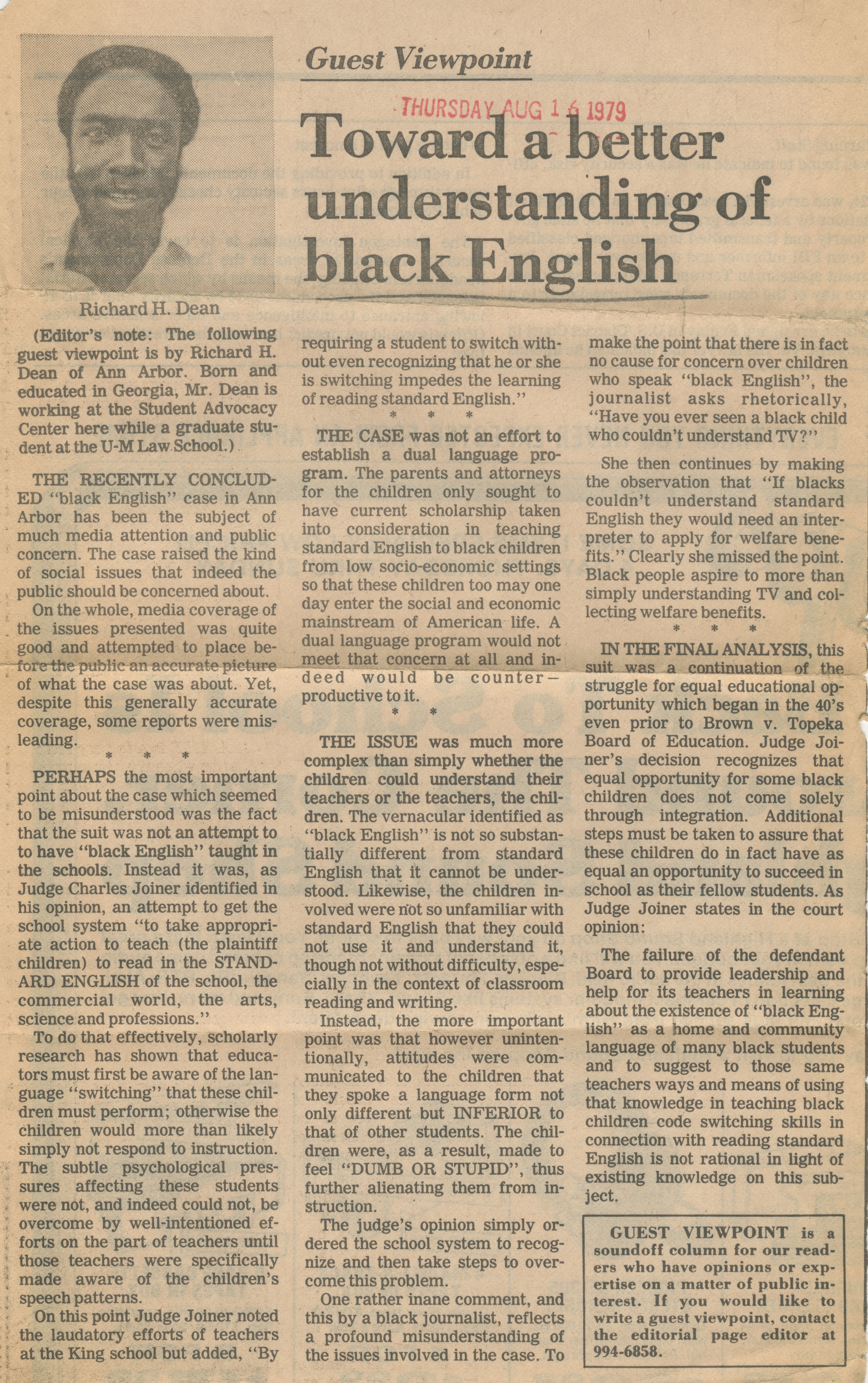 Toward a better understanding of black English

(Editor’s note: The following guest viewpoint is by Richard H. Dean of Ann Arbor. Born and educated in Georgia, Mr. Dean is working at the Student Advocacy Center here while a graduate student at the U-M Law-School.).

THE RECENTLY CONCLUDED “black English” case in Ann Arbor has been the subject of much media attention and public concern. The case raised the kind of social issues that indeed the public should be concerned about.

On the whole, media coverage of the issues presented was quite good and attempted to place before the public an accurate picture of what the case was about. Yet, despite this generally accurate coverage, some reports were misleading.

PERHAPS the most important point about the case which seemed to be misunderstood was the fact that the suit was not an attempt to to have “black English” taught in the schools. Instead it was, as Judge Charles Joiner identified in his opinion, an attempt to get the school system “to take appropriate action to teach (the plaintiff children) to read in the STANDARD ENGLISH of the school, the commercial world, the arts, science and professions.”

To do that effectively, scholarly research has shown that educators must first be aware of the language “switching” that these children must perform; otherwise the children would more than likely simply not respond to instruction. The subtle psychological pressures affecting these students were not, and indeed could not, be overcome by well-intentioned efforts on the part of teachers until those teachers were specifically made aware of the children’s speech patterns.

On this point Judge Joiner noted the laudatory efforts of teachers at the King school but added, “By requiring a student to switch without even recognizing that he or she is switching impedes the learning of reading standard English.”

THE CASE was not an effort to establish a dual language program. The parents and attorneys for the children only sought to have current scholarship taken into consideration in teaching standard English to black children from low socio-economic settings so that these children too may one day enter the social and economic mainstream of American life. A dual language program would not meet that concern at all and indeed would be counterproductive to it.

THE ISSUE was much more complex than simply whether the children could understand their teachers or the teachers, the children. The vernacular identified as “black English” is not so substantially different from standard English that it cannot be understood. Likewise, the children involved were riot so unfamiliar with standard English that they could not use it and understand it, though not without difficulty, especially in the context of classroom reading and writing.

Instead, the more important point was that however unintentionally, attitudes were communicated to the children that they spoke a language form not only different but INFERIOR to that of other students. The children were, as a result, made to feel “DUMB OR STUPID”, thus further alienating them from instruction.

The judge’s opinion simply ordered the school system to recognize and then take steps to overcome this problem.

One rather inane comment, and this by a black journalist, reflects a profound misunderstanding of the issues involved in the case. To make the point that there is in fact no cause for concern over children who speak “black English”, the journalist asks rhetorically, “Have you ever seen a black child who couldn’t understand TV?”

She then continues by making the observation that “If blacks couldn’t understand standard English they would need an interpreter to apply for welfare benefits.” Clearly she missed the point. Black people aspire to more than simply understanding TV and collecting welfare benefits.

IN THE FINAL ANALYSIS, this suit was a continuation of the struggle for equal educational opportunity which began in the 40’s J even prior to Brown v. Topeka Board of Education. Judge Joiner’s decision recognizes that equal opportunity for some black children does not come solely through integration. Additional steps must be taken to assure that these children do in fact have as equal an opportunity to succeed in school as their fellow students. As Judge Joiner states in the court opinion:

The failure of the defendant Board to provide leadership and help for its teachers in learning about the existence of “black English” as a home and community language of many black students and to suggest to those same teachers ways and means of using that knowledge in teaching black children code switching skills in connection with reading standard English is not rational in light of existing knowledge on this subject.

GUEST VIEWPOINT is a soundoff column for our readers who have opinions or expertise on a matter of public interest. If you would like to write a guest viewpoint, contact the editorial page editor at 994-6858.