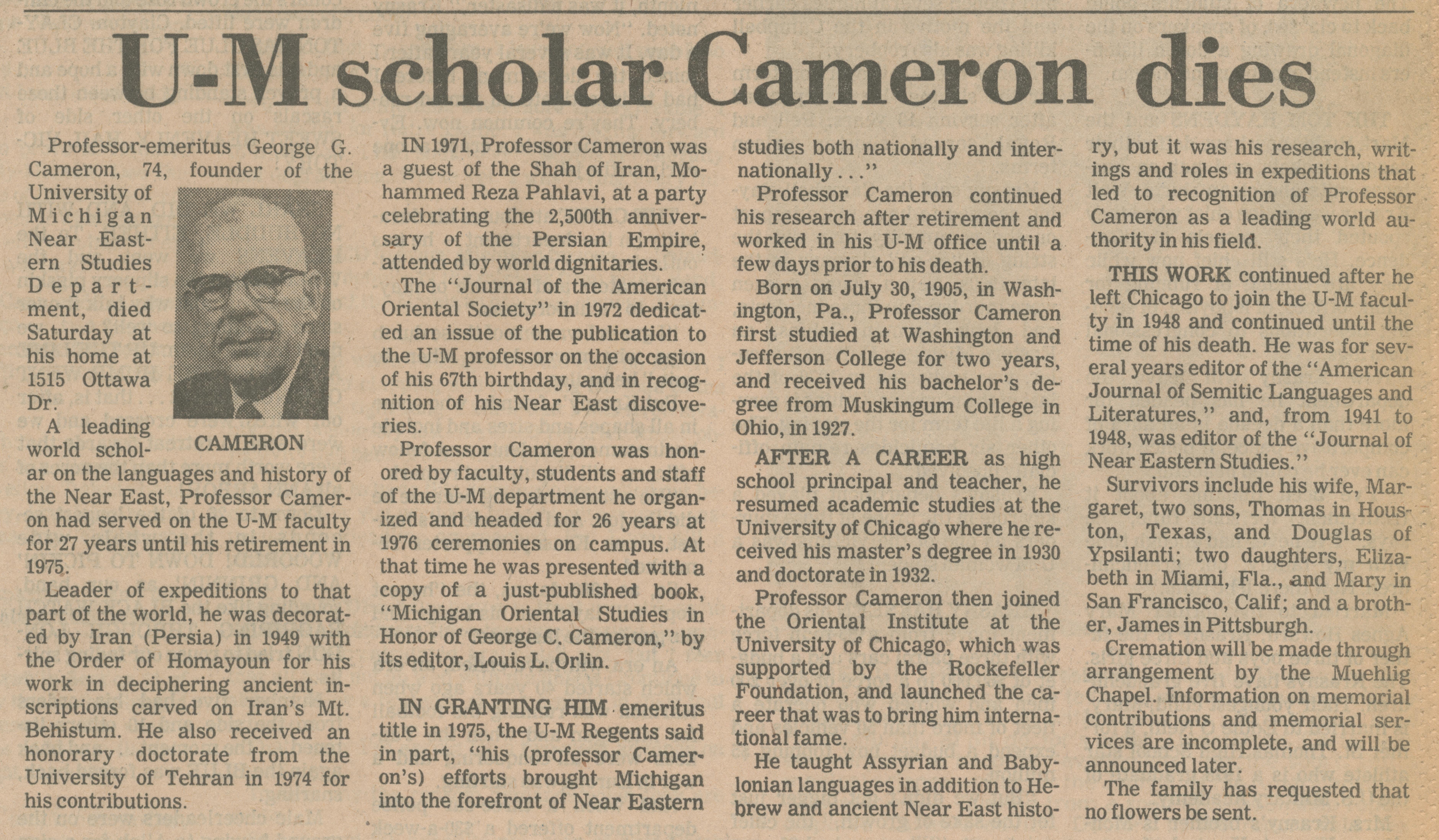 Professor-emeritus George G. Cameron, 74, founder of the University of Michigan Near Eastern Studies Department, died Saturday at his home at 1515 Ottawa Dr.
A leading world scholar on the languages and history of the Near East, Professor Cameron had served on the U-M faculty for 27 years until his retirement in 1975.
Leader of expeditions to that part of the world, he was decorated by Iran (Persia) in 1949 with the Order of Homayoun for his work in deciphering ancient inscriptions carved on Iran's Mt. Behistum. He also received an honorary doctorate from the University of Tehran in 1974 for his contributions.
In 1971, Professor Cameron was a guest of the Shah of Iran, Mohammed Reza Pahlavi, at a party celebrating the 2,500th anniversary of the Persian Empire, attended by world dignitaries.
The "Journal of the American Oriental Society" in 1972 dedicated an issue of the publication to the U-M professor on the occasion of his 67th birthday, and in recognition of his Near East discoveries.
Professor Cameron was honored by faculty, students and staff of the U-M department he organized and headed for 26 years at 1976 ceremonies on campus. At that time he was presented with a copy of a just-published book, "Michigan Oriental Studies in Honor of George G. Cameron," by its editor, Louis L. Orlin.
IN GRANTING HIM emeritus title in 1975, the U-M Regents said in part, "his (professor Cameron's) efforts brought Michigan into the forefront of Near Eastern studies both nationally and internationally..."
Professor Cameron continued his research after retirement and worked in his U-M office until a few days prior to his death.
Born on July 30, 1905, in Washington, Pa., Professor Cameron first studied at Washington and Jefferson College for two years, and received his bachelor's degree from Muskingum Collge in Ohio, in 1927.
AFTER A CAREER as high school principal and teacher, he resumed academic studies at the University of Chicago where he received his master's degree in 1930 and doctorate in 1932.
Professor Cameron then joined the Oriental Institute at the University of Chicago, which was supported by the Rockefeller Foundation, and launched the career that was to bring him international fame.
He taught Assyrian and Babylonian languages in addition to Hebrew and ancient Near East history, but it was his research, writings and roles in expeditions that led to recognition of Professor Cameron as a leading world authority in his field.
THIS WORK continued after he left Chicago to join the U-M faculty in 1948 and continued until the time of his death. He was for several years editor of the "American Journal of Semitic Languages and Literatures," and, from 1941 to 1948, was editor of the "Journal of Near Eastern Studies."
Survivors include his wife, Margaret, two sons, Thomas in Houston, Texas, and Douglas of Ypsilanti; two daughters, Elizabeth in Miami, Fla., and Mary in San Francisco, Calif; and a brother, James in Pittsburgh.
Cremation will be made through arrangement by the Muehlig Chapel. Information on memorial contributions and memorial services are incomplete, and will be announced later.
The family has requested that no flowers be sent.