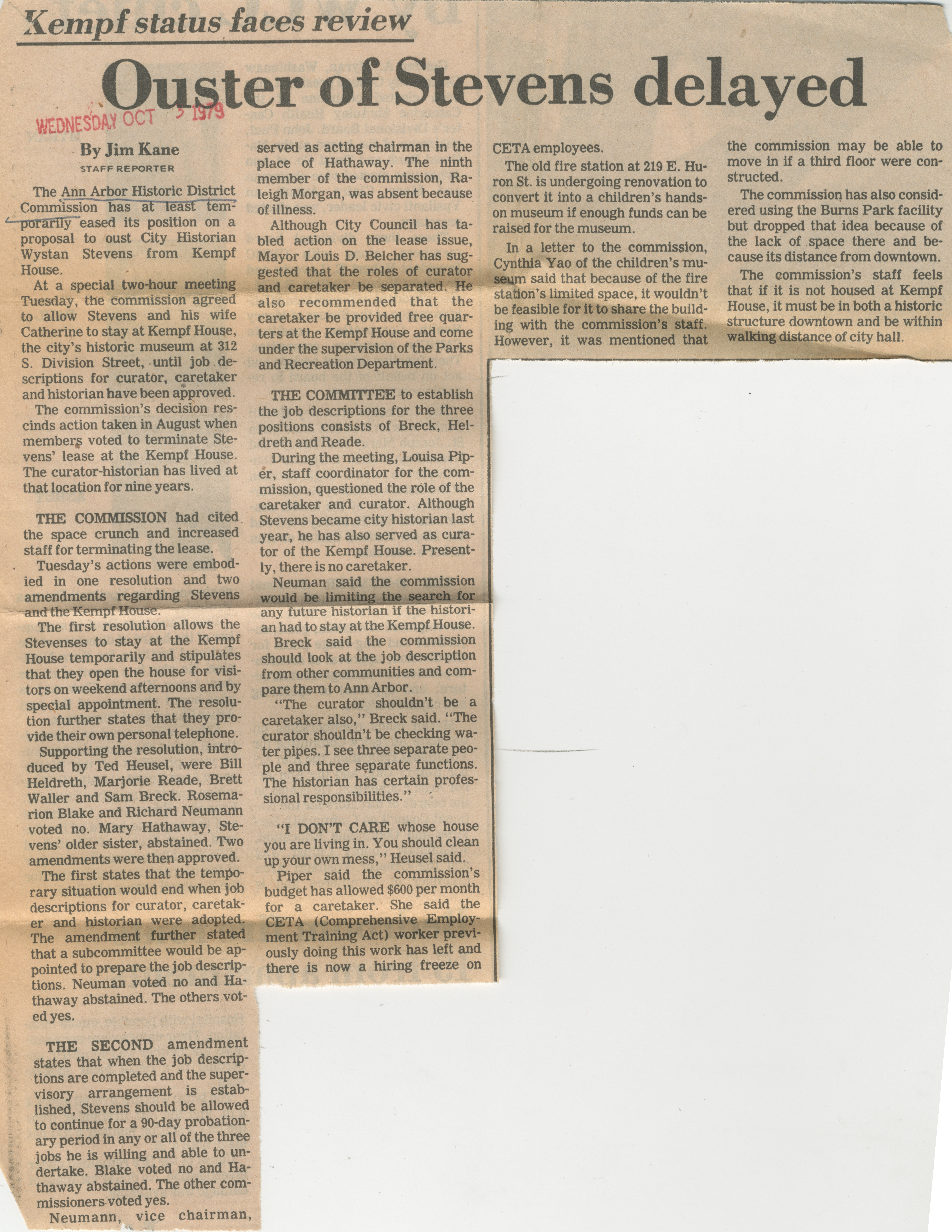 The Ann Arbor Historic District Commission has at least temporarily eased its position on a proposal to oust City Historian Wystan Stevens from Kempf House.

At a special two-hour meeting Tuesday, the commission agreed to allow Stevens and his wife Catherine to stay at Kempf House, the city’s historic museum at 312 S. Division Street, until job descriptions for curator, caretaker and historian have been approved.

The commission’s decision rescinds action taken in August when member voted to terminate Stevens’ lease at the Kempf House. The curator-historian has lived at that location for nine years.

THE COMMISSION had cited the space crunch and increased staff for terminating the lease.

Tuesday’s actions were embodied in one resolution and two amendments regarding Stevens and the Kempf House.

The first resolution allows the Stevenses to stay at the Kempf House temporarily and stipulates that they open the house for visitors on weekend afternoons and by special appointment. The resolution further states that they provide their own personal telephone.

The first states that the temporary situation would end when job descriptions for curator, caretaker and historian were adopted. The amendment further stated that a subcommittee would be appointed to prepare the job descriptions. Neuman voted no and Hathaway abstained. The others voted yes.

THE SECOND amendment states that when the job descriptions are completed and the supervisory arrangement is established, Stevens should be allowed to continue for a 90-day probationary period in any or all of the three jobs he is willing and able to undertake. Blake voted no and Hathaway abstained. The other commissioners voted yes.

Neumann, vice chairman, served as acting chairman in the place of Hathaway. The ninth member of the commission, Raleigh Morgan, was absent because of illness.

Although City Council has tabled action on the lease issue, Mayor Louis D. Belcher has suggested that the roles of curator and caretaker be separated. He also recommended that the caretaker be provided free quarters at the Kempf House and come under the supervision of the Parks and Recreation Department.

THE COMMITTEE to establish the job descriptions for the three positions consists of Breck, Heldreth and Reade.

During the meeting, Louisa Piper, staff coordinator for the commission, questioned the role of the caretaker and curator. Although Stevens became city historian last year, he has also served as curator of the Kempf House. Presently, there is no caretaker.

Neuman said the commission would be limiting the search for any future historian if the historian had to stay at the Kempf House.

Breck said the commission should look at the job description from other communities and compare them to Ann Arbor.

“I DON’T CARE whose house you are living in. You should clean up your own mess,” Heusel said.

Piper said the commission’s budget has allowed $600 per month for a caretaker. She said the CETA (Comprehensive Employment Training Act) worker previously doing this work has left and there is now a hiring freeze on CETA employees.

The old fire station at 219 E. Huron St. is undergoing renovation to convert it into a children’s hands-on museum if enough funds can be raised for the museum.

In a letter to the commission, Cynthia Yao of the children’s museum said that because of the fire station’s limited space, it wouldn’t be feasible for it to share the building with the commission’s staff. However, it was mentioned that the commission may be able to move in if a third floor were constructed.

The commission has also considered using the Burns Park facility but dropped that idea because of the lack of space there and because its distance from downtown.

The commission’s staff feels that if it is not housed at Kempf House, it must be in both a historic structure downtown and be within walking distance of city hall.