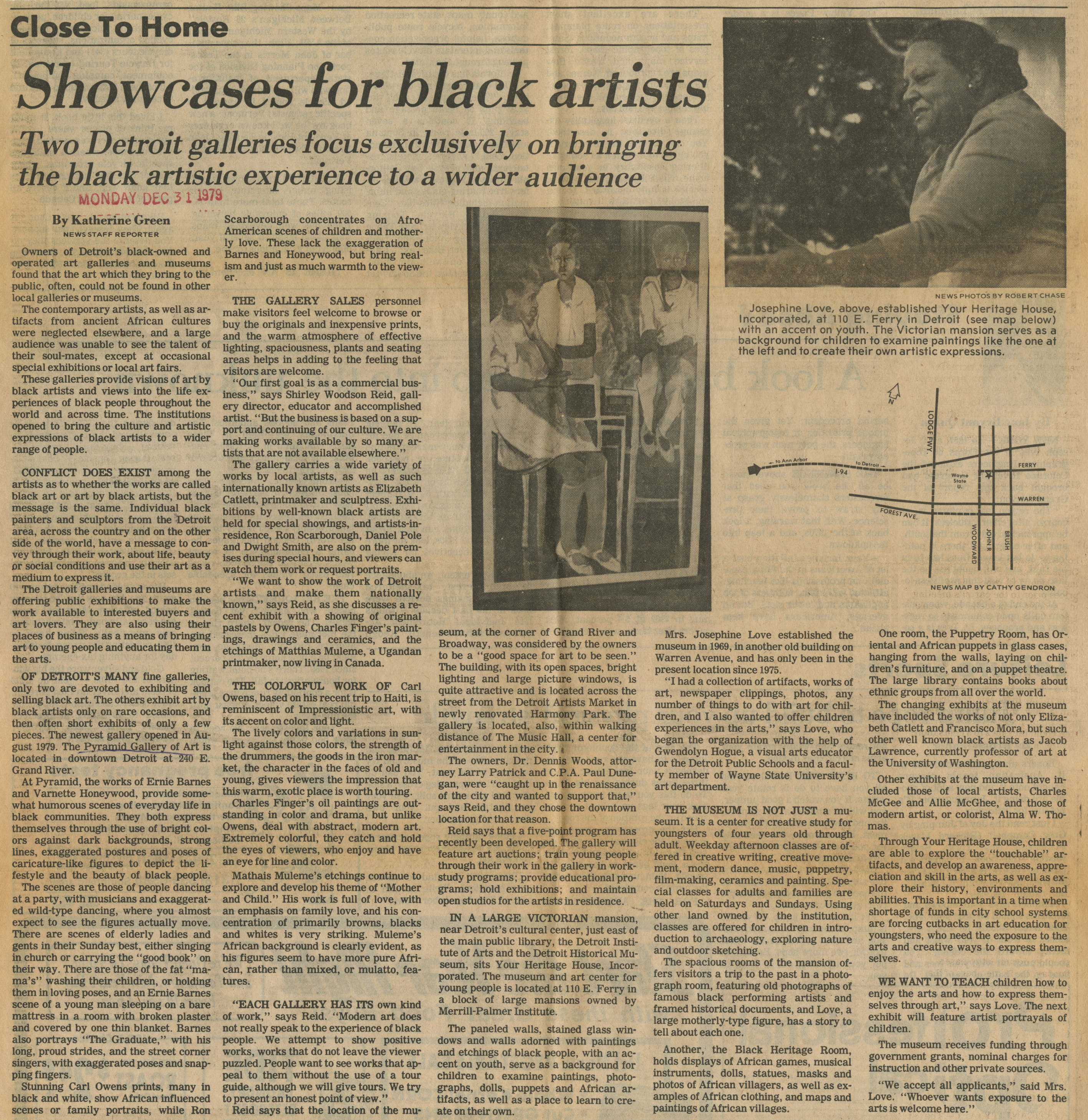 Owners of Detroit’s black-owned and operated art galleries and museums found that the art which they bring to the public, often, could not be found in other local galleries or museums.

The contemporary artists, as well as artifacts from ancient African cultures were neglected elsewhere, and a large audience was unable to see the talent of their soul-mates, except at occasional special exhibitions or local art fairs.

These galleries provide visions of art by black artists and views into the life experiences of black people throughout the world and across time. The institutions opened to bring the culture and artistic expressions of black artists to a wider range of people.

CONFLICT DOES EXIST among the artists as to whether the works are called black art or art by black artists, but the message is the same. Individual black painters and sculptors from the Detroit area, across the country and on the other side of the world, have a message to convey through their work, about life, beauty or social conditions and use their art as a medium to express it.

The Detroit galleries and museums are offering public exhibitions to make the work available to interested buyers and art lovers. They are also using their places of business as a means of bringing art to young people and educating them in the arts.

OF DETROIT’S MANY fine galleries, only two are devoted to exhibiting and selling black art. The others exhibit art by black artists only on rare occasions, and then often short exhibits of only a few pieces. The newest gallery opened in August 1979. The Pyramid Gallery of Art is located in downtown Detroit at Grand River.

At Pyramid, the works of Ernie Barnes and Varnette Honeywood, provide somewhat humorous scenes of everyday life in black communities. They both express themselves through the use of bright colors against dark backgrounds, strong lines, exaggerated postures and poses of caricature-like figures to depict the lifestyle and the beauty of black people.

The scenes are those of people dancing: at a party, with musicians and exaggerated wild-type dancing, where you almost expect to see the figures actually move. There are scenes of elderly ladies and gents in their Sunday best, either singing church or carrying the “good book”’ on their way. There are those of the fat ‘‘ma- ma’s’’ washing their children, or holding them in loving poses, and an Ernie Barnes ‘scene of a young man sleeping on a bare mattress in a room with broken plaster and covered by one thin blanket. Barnes also portrays “The Graduate,” with his long, proud strides, and the street corner singers, with exaggerated poses and snapping fingers. Stunning Carl Owens prints, many in black and white, show African influenced scenes or family portraits, while Ron Scarborough concentrates on Afro- American scenes of children and motherly love. These lack the exaggeration of Barnes and Honeywood, but bring realism and just as much warmth to the viewer.

THE GALLERY SALES personnel make visitors feel welcome to browse or buy the originals and inexpensive prints, and the warm atmosphere of effective lighting, spaciousness, plants and seating areas helps in adding to the feeling that visitors are welcome.

“Our first goal is as a commercial business,” says Shirley Woodson Reid, gallery director, educator and accomplished artist. "But the business is based on a support and continuing of our culture. We are making works available by so many artists that are not available elsewhere.”

The gallery carries a wide variety of works by local artists, as well as such internationally known artists as Elizabeth Catlett, printmaker and sculptress. Exhibitions by well-known black artists are held for special showings, and artists-in- residence, Ron Scarborough, Daniel Pole and Dwight Smith, are also on the premises during special hours, and viewers can watch them work or request portraits,

“We want to show the work of Detroit artists and make them nationally known,” says Reid, as she discusses a recent exhibit with a showing of original pastels by Owens, Charles Finger’s paintings, drawings and ceramics, and the etchings of Matthias Muleme, a Ugandan printmaker, now living in Canada.

THE COLORFUL WORK OF Carl Owens, based on his recent trip to Haiti, is reminiscent of Impressionistic art, with its accent on color and light.

The lively colors and variations in sunlight against those colors, the strength of the drummers, the goods in the iron market, the character in the faces of old and young, gives viewers the impression that this warm, exotic place is worth touring.

Charles Finger’s oil paintings are outstanding in color and drama, but unlike Owens, deal with abstract, modern art. Extremely colorful, they catch and hold the eyes of viewers, who enjoy and have an eye for line and color.

Mathais Muleme’s etchings continue to explore and develop his theme of "Mother and Child.” His work is full of love, with an emphasis on family love, and his concentration of primarily browns, blacks and whites is very striking. Muleme’s African background is clearly evident, as his figures seem to have more pure African, rather than mixed, or mulatto, features.

“EACH GALLERY HAS ITS own kind of work,” says Reid. “Modern art does not really speak to the experience of black people. We attempt to show positive works, works that do not leave the viewer puzzled. People want to see works that appeal to them without the use of a tour guide, although we will give tours. We try to present an honest point of view.”

Reid says that the location of the museum, at the corner of Grand River and Broadway, was considered by the owners to be a “good space for art to be seen.” The building, with its open spaces, bright lighting and large picture windows, is quite attractive and is located across the street from the Detroit Artists  Market in newly renovated Harm Park. The gallery is located, also, within walking distance of The Music Hall, a center for entertainment in the city.

The owners, Dr. Dennis Woods, attorney Larry Patrick and C.P.A. Paul Dunegan, were “caught up in the renaissance of the city and wanted to support that," says Reid, and they chose the downtown location for that reason.

Reid says that a five-piont program has recently been developed. The gallery will feature art auctions; train young people through their work in gallery in work-study programs; provide educational programs; hold exhibitions; and maintain open studios for the artists in residence.

IN A LARGE VICTORIAN mansion, near Detroit’s cultural center, just east of the main public library, the Detroit Institute of Arts and the Detroit Historical Museum, sits Your Heritage House, Incorporated. The museum and art center for young people is located at 110 E. Ferry in a block of large mansions owned by Merrill-Palmer Institute.

The paneled walls, stained glass windows and walls adorned with paintings and etchings of black people, with an accent on youth, serve as a background for children to examine paintings, photographs, dolls, puppets and African artifacts, as well as a place to learn to create on their own.

Mrs. Josephine Love established the museum in 1969, in another old building on Warren Avenue, and has only been in the present location since 1975.

“I had a collection of artifacts, works of art, newspaper clippings, photos, any number of things to do with art for children, and I also wanted to offer children experiences in the arts,’’ says Love, who began the organization with the help of. Gwendolyn Hogue, a visual arts educator for the Detroit Public Schools and a faculty member of Wayne State University’s art department.

THE MUSEUM IS NOT JUST a museum. It is a center for creative study for youngsters of four years old through adult. Weekday afternoon classes are offered in creative writing, creative movement, modern dance, music, puppetry, film-making, ceramics and painting. Special classes for adults and families are held on Saturdays and Sundays. Using other land owned by the institution, classes are. offered for children in introduction to archaeology, exploring nature and outdoor sketching.

The spacious rooms of the mansion offers visitors a trip to the past in a photograph room, featuring old photographs of famous black performing artists and framed historical documents, and Love, a large motherly-type figure, has a story to tell about each one.

One room, the Puppetry Room, has Oriental and African puppets in glass cases, hanging from the walls, laying on children’s furniture, and on a puppet theatre. The large library contains books about ethnic groups from all over the world.

The changing exhibits at the museum have included the works of not only Elizabeth Catlett and Francisco Mora, but such other well known black artists as Jacob Lawrence, currently professor of art at the University of Washington.

Other exhibits at the museum have included those of local artists, Charles McGee and Allie McGhee, and those of modern artist, or colorist, Alma W. Thomas.

Through Your Heritage House, children are able to explore the “‘touchable” artifacts, and develop an awareness, appreciation and skill in the arts, as well as explore their history, environments and abilities. This is important in a time when shortage of funds in city school systems. are forcing cutbacks in art education for youngsters, who need the exposure to the arts and creative ways to express themselves.

WE WANT TO TEACH children how to enjoy the arts and how to express themselves through art,” says Love. The next exhibit will feature artist portrayals of children.

The museum receives funding through government grants, nominal charges for instruction and other private sources.

“We accept all applicants,” said Mrs. Love. “Whoever wants exposure to the arts is welcome here.”

Josephine Love, above, established Your Heritage House, Incorporated, at 110 E. Ferry Detroit (see map below) with an accent on youth. The Victorian mansion serves as a background for children to examine paintings like the one at the left and to create their own artistic expressions.