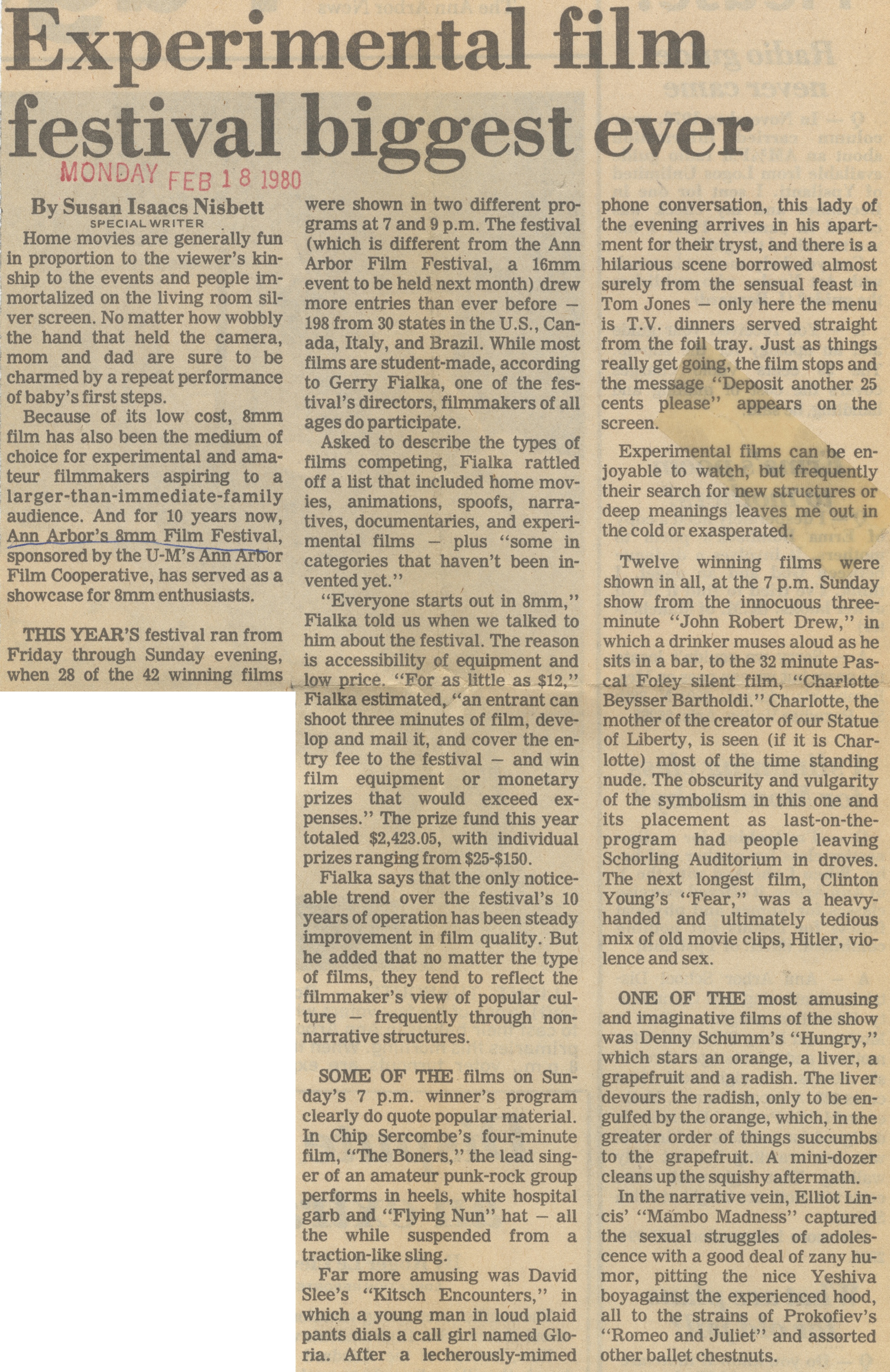 Home movies are generally fun in proportion to the viewer’s kinship to the events and people immortalized on the living room silver screen. No matter how wobbly the hand that held the camera, mom and dad are sure to be charmed by a repeat performance of baby’s first steps.

Because of its low cost, 8mm film has also been the medium of choice for experimental and amateur filmmakers aspiring to a larger-than-immediate-family audience. And for 10 years now, Ann Arbor’s 8mm Film Festival, sponsored by the U-M’s' Ann Arbor Film Cooperative, has served as a showcase for 8mm enthusiasts.

THIS YEAR’S festival ran from Friday through Sunday evening, when 28 of the 42 winning films were shown in two different programs at 7 and 9 p.m. The festival (which is different from the Ann Arbor Film Festival, a 16mm event to be held next month) drew more entries than ever before -198 from 30 states in the U.S., Canada, Italy, and Brazil. While most films are student-made, according to Gerry Fialka, one of the festival’s directors, filmmakers of all ages do participate.

Asked to describe the types of films competing, Fialka rattled off a list that included home movies, animations, spoofs, narratives, documentaries, and experimental films - plus “some in categories that haven’t been invented yet.”

“Everyone starts out in 8mm,” Fialka told us when we talked to him about the festival. The reason is accessibility of equipment and low price. “For as little as $12,” Fialka estimated, “an entrant can shoot three minutes of film, develop and mail it, and cover the entry fee to the festival — and win film equipment or monetary prizes that would exceed expenses.” The prize fund this year totaled $2,423.05, with individual prizes ranging from $25-$150.

Fialka says that the only noticeable trend over the festival’s 10 years of operation has been steady improvement in film quality. But he added that no matter the type of films, they tend to reflect the filmmaker’s view of popular culture - frequently through nonnarrative structures.

SOME OF THE films on Sunday’s 7 p.m. winner’s program clearly do quote popular material. In Chip Sercombe’s four-minute film, “The Boners,” the lead singer of an amateur punk-rock group performs in heels, white hospital garb and “Flying Nun” hat - all the while suspended from a traction-like sling.

Far more amusing was David Slee’s “Kitsch Encounters,” in which a young man in loud plaid pants dials a call girl named Gloria. After a lecherously-mimed phone conversation, this lady of the evening arrives in his apartment for their tryst, and there is a hilarious scene borrowed almost surely from the sensual feast in Tom Jones - only here the menu is T.V. dinners served straight from the foil tray. Just as things really get going, the film stops and the message “Deposit another 25 cents please” appears on the screen.

Experimental films can be enjoyable to watch, but frequently their search for new structures or deep meanings leaves me out in the cold or exasperated.

Twelve winning films were shown in all, at the 7 p.m. Sunday show from the innocuous three-minute “John Robert Drew,” in which a drinker muses aloud as he sits in a bar, to the 32 minute Pascal Foley silent film, “Charlotte Beysser Bartholdi.” Charlotte, the mother of the creator of our Statue of Liberty, is seen (if it is Charlotte) most of the time standing nude. The obscurity and vulgarity of the symbolism in this one and its placement as last-on-the-program had people leaving Schorling Auditorium in droves. The next longest film, Clinton Young’s “Fear,” was a heavy-handed and ultimately tedious mix of old movie clips. Hitler, violence and sex.

ONE OF THE most amusing and imaginative films of the show was Denny Schumm’s “Hungry,” which stars an orange, a liver, a grapefruit and a radish. The liver devours the radish, only to be engulfed by the orange, which, in the greater order of things succumbs to the grapefruit. A mini-dozer cleans up the squishy aftermath.

In the narrative vein, Elliot Lin-cis’ “Mambo Madness” captured the sexual struggles of adolescence with a good deal of zany humor, pitting the nice Yeshiva boyagainst the experienced hood, all to the strains of Prokofiev’s “Romeo and Juliet” and assorted other ballet chestnuts.