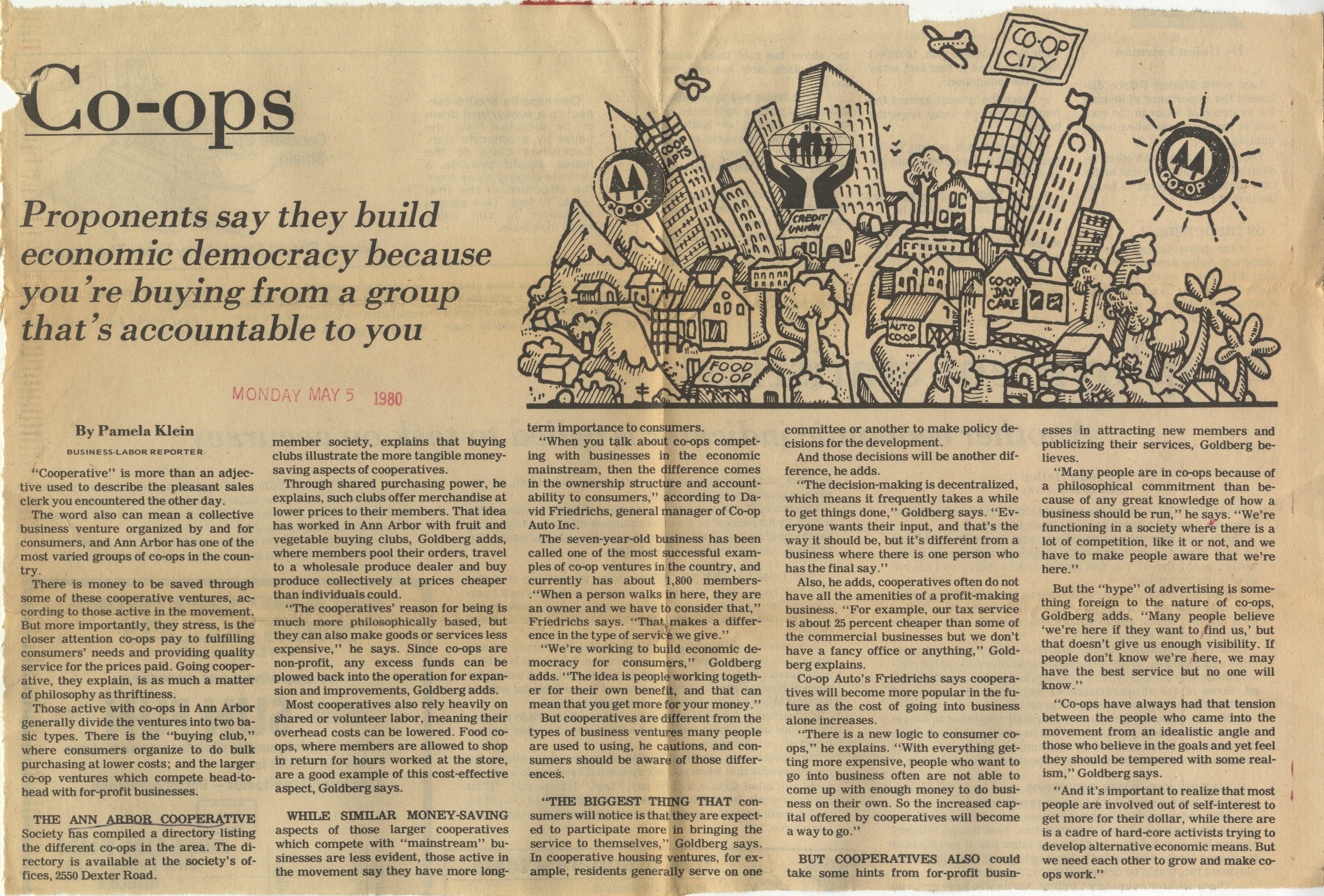 Note: Portion of article is missing in the original paper as well.

“Cooperative” is more than an adjective used to describe the pleasant sales clerk you encountered the other day.

The word also can mean a collective business venture organized by and for consumers, and Ann Arbor has one of the most varied groups of co-ops in the country.

There is money to be saved through some of these cooperative ventures, according to those.active in the movement, But more importantly, they stress, is the’ closer attention co-ops pay to fulfilling consumers’ needs and providing quality service for the prices paid. Going cooperative, they explain, is as much a matter of philosophy as thriftiness.

Those active with co-ops in Ann Arbor generally divide the ventures into two basic types. There is the “buying club,” where consumers organize to do bulk purchasing at lower costs; and the larger co-op ventures which compete head-to- head with for-profit businesses.

THE ANN ARBOR COOPERATIVE Society Has compiled a directory listing the different co-ops in the area. The directory is available at the society’s offices, 2550 Dexter Road.

Through shared purchasing power, he explains, such clubs offer merchandise at lower prices to their members. That idea has worked in Ann Arbor with fruit and vegetable buying clubs, Goldberg adds, where members pool their orders, travel to a wholesale produce dealer and buy produce collectively at prices cheaper than individuals could.

“The cooperatives’ reason for being is much more philosophically based, but they can also make goods or services less expensive,”’ he says. Since co-ops are non-profit, any excess funds can be plowed back into the operation for expansion and improvements, Goldberg adds.

Most cooperatives also rely heavily on shared or volunteer labor, meaning their overhead costs can be lowered. Food co- ops, where members are allowed to shop in return for hours worked at the store, are a good example of this cost-effective aspect, Goldberg says.

WHILE SIMILAR MONEY-SAVING aspects of those larger cooperatives which compete with “mainstream’’ businesses are less evident, those active in the movement say they have more longterm importance to consumers.

“When you talk about co-ops competing with businesses in the economic mainstream, then the difference comes in the ownership struct and account- ability to consumers,” according to David Friedrichs, general manager of Co-op Auto Inc.

The seven-year-old business has been called one of the most successful examples of co-op ventures in the country, and currently has about 1,800 members- .‘‘When a person walks in here, they are an owner and we have to consider that,” Friedrichs says. "That makes a difference in the type of service we give.”

“We’re working to build economic democracy for consumers,” Goldberg adds. ‘‘The idea is people working together for their own benefit, and that can mean that you get more for your money.”’

But cooperatives are different from the types of business ventures many people are used to using, he cautions, and consumers should be aware of those differences.

“THE BIGGEST THING THAT consumers will notice is that they are expected to participate more in bringing the service to themselves,” Goldberg says. In cooperative housing ventures, for example, residents generally serve on one committee or another to make policy decisions for the development.

And those decisions will be another difference, he adds.

“The decision-making is decentralized, which means it frequently takes a while to get things done,” Goldberg says. ‘“‘Everyone wants their input, and that’s the way it should be, but it’s different from a business where there is one person who has the final say.”

Also, he adds, cooperatives often do not have all the amenities of a profit-making business. ‘“‘For example, our tax service is about 25 percent cheaper than some of the commercial businesses but we don’t have a fancy office or anything,” Goldberg explains.

Co-op Auto’s Friedrichs says cooperatives will become more popular in the future as the cost of going into business alone increases.

“There is a new logic to consumer co- ops,” he explains. ‘“‘With everything getting more expensive, people who want to go into business often are not able to come up with enough money to do business on their own. So the increased capital offered by cooperatives will become a way to go.”

BUT COOPERATIVES ALSO could take some hints from for-profit businesses in attracting new members and publicizing their services, Goldberg believes.

“Many people are in co-ops because of a philosophical commitment than because of any great knowledge of how a business should be run,” he says. ‘‘We’re functioning in a society where there is a lot of competition, like it or not, and we have to make people aware that we’re here.”

But the “hype”’ of advertising is something foreign to the nature of co-ops, Goldberg adds. ‘“‘Many people believe ‘we’re here if they want to find us,’ but that doesn’t give us enough visibility. If people don’t know we’re here, we may have the best service but no one will know.”

“Co-ops have always had that tension between the people who came into the movement from an idealistic angle and those who believe in the goals and yet feel they should be tempered with some realism,” Goldberg says.

“And it’s important to realize that most people are involved out of self-interest to get more for their dollar, while there are is a cadre of hard-core activists trying to develop alternative economic means. But we need each other to grow and make co- ops work.”