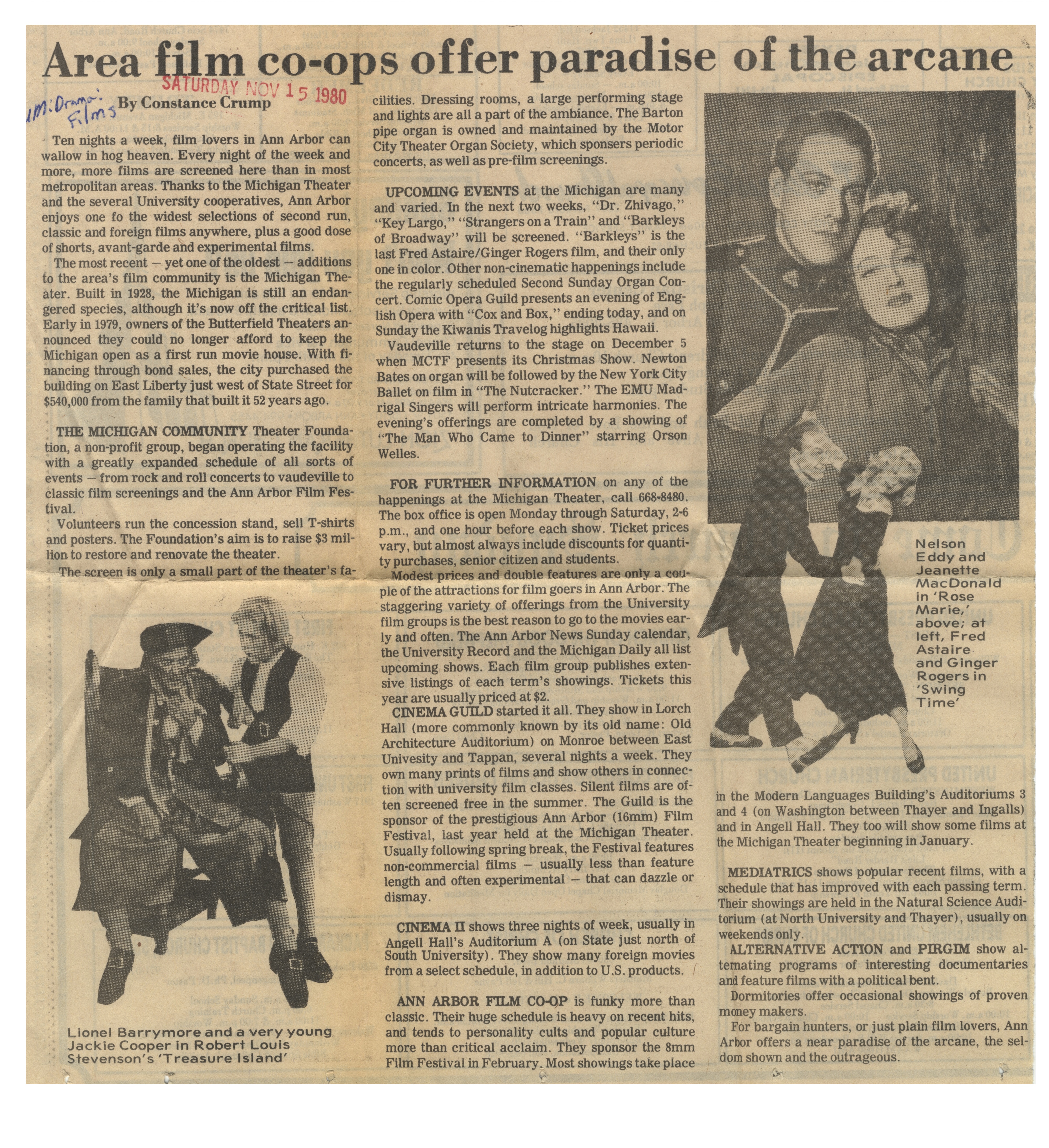 - Ten nights a week, film lovers in Ann Arbor can
wallow in hog heaven. Every night of the week and
more, more films are screened here than in most
metropolitan areas. Thanks to the Michigan Theater
and the several University cooperatives, Ann Arbor
enjoys one S» the widest selections of second run,

The most recent - yet one of the oldest - additions
to the area's film community is the Michigan The-
ater. Built in 1928, the Michigan is still an endan-
gered species, although it's now oft the critical list.
Early in 1979, owners of the Butterfield Theaters an-
nounced they could no longer afford to keep the
Michigan open as a first run movie house. With fi-
lancing through bond sales, the city purchased the
irilding on East Liberty just west of State Street for
..40,000 from the family that built it 52 years ago.

Lionel Barrymore and a ve
Jackie Cooper In Robert Lo

cilities. Dressing rooms, a large performing stage
and lights are all a pan of the ambiance. The Barton
pipe organ is owned and maintained by the Motor
City Theater Organ Society, which sponsors periodic-
concerts... " Fitni screenings.

UPCO'i at the Michigan are many

"Key Largo," "Strangers on a Train" and "Barkleys
of Broadway" will be screened. "Barkleys" is the
last Fred Astaire/Ginger Rogers film, and their only

when M! .
Bates on organ will be followed hy the New York City
Ballet on film in "The Nutcracker." The EMU Mad-
rigal Singers will perform intricate harmonies. The
evening's offerings are completed by a showing of
"The Man Who Came to Dinner" starring Orson

FOR FURTHER INFORMATION on any of the
happenings at the Michigan Theater, call 668-8480.
The box office is open Monday through Saturday, 2-6
p.m., and one hour before each show. Ticket prices
vary, but almost always include discounts for quanti-

Modest prices and double features are only a cou-
ple of the attractions tor film goers in Ann Arbor- The
staggering variety of offerings from the University
film groups is the best reason to go to the movies ear-
ly and often. The Ann Arbor News Sunday calendar,
(he University Record and the Michigan Daily all list
upcoming shows. Each film group publishes exten-
-:-^ i;nt;,,n. ,r ......t, tr.nm'i: rowings. Tickets this

They show in Lorch
')y its old name: Old
Architecture Auditorium) on Monroe between East
Univeslty and Tappan, several nights a week. They
own many prints of films and show others in connec-
tion with university film classes. Silent films are of-
ten screened free in the summer. The Guild is the
sponsor of the prestigious Ann Arbor (16mm) Film
Festlvr:!. iast year held at the Michigan Theater.
Usually following sprins i ivalfeatures
non-conunercial films ;ian feature
length and often experui,, ..u dazzle or
dismay.

CINEMA n shows three nights of week, usually in
Angell Hall's Auditorium A (on State just north of
South University). They show many foreign movies
from a select schedule, in addition to U.S. products.

ANN ARBOR FILM CO-OP is funky more than
classic. Their huge schedule is heavy on recent hits,
and tends to personality cults and popular culture
more than critical acclaim. They sponsor the 8mm
Film Festival in February. Most showlngs take place

MEDIATRICS shows populi; with a
schedule that has improved whc i ,:,'l- [' •;: ^ term.
Their showings are held in the Natural Science Audi-
torium (at North University and Thayer), usually on
weekends only.