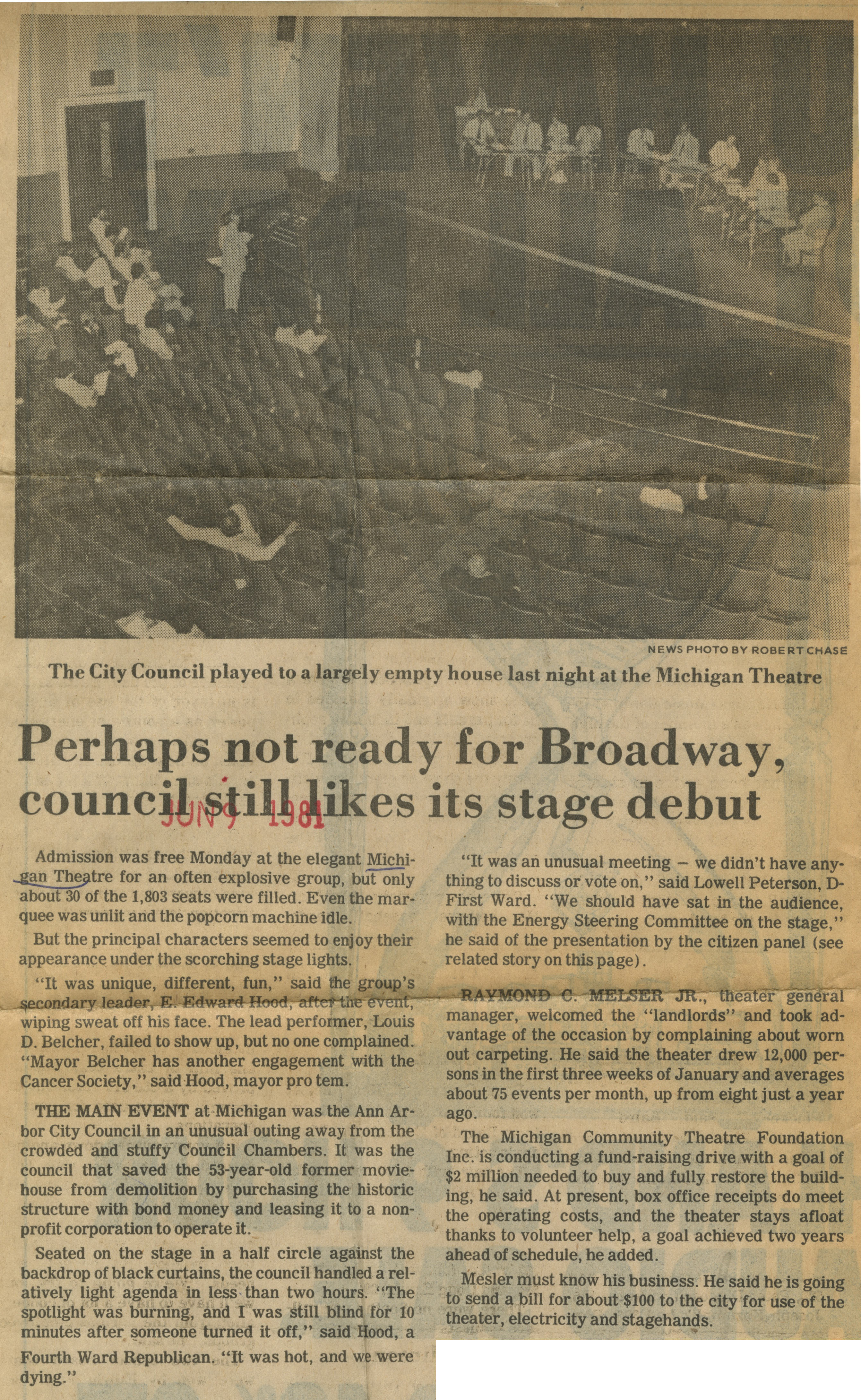 Admission was free Monday at the elegant Michigan Theatre for an often explosive group, but only about 30 of the 1,803 seats were filled. Even the marquee was unlit and the popcorn machine idle.

But the principal characters seemed to enjoy their appearance under the scorching stage lights.

“It was unique, different, fun,” said the group’s secondary leader, E. Edward Hood after the event, wiping sweat off his face. The lead performer, Louis D. Belcher, failed to show up, but no one complained. “Mayor Belcher has another engagement with the Cancer Society,” said Hood, mayor pro tem.

THE MAIN EVENT at Michigan was the Ann Arbor City Council in an unusual outing away from the crowded and stuffy Council Chambers. It was the council that saved the 53-year-old former movie-house from demolition by purchasing the historic structure with bond money and leasing it to a nonprofit corporation to operate it.

Seated on the stage in a half circle against the backdrop of black curtains, the council handled a relatively light agenda in less than two hours. “The spotlight was burning, and I was still blind for 10 minutes after someone turned it off,” said Hood, a Fourth Ward Republican. “It was hot, and we were dying.”

“It was an unusual meeting -- we didn’t have anything to discuss or vote on,” said Lowell Peterson, D-First Ward. "We should have sat in the audience, with the Energy Steering Committee on the stage,” he said of the presentation by the citizen panel (see related story on this page).

RAYMOND C. MELSER JR., theater general manager, welcomed the “landlords” and took advantage of the occasion by complaining about worn out carpeting. He said the theater drew 12,000 persons in the first three weeks of January and averages about 75 events per month, up from eight just a year ago.

The Michigan Community Theatre Foundation Inc. is conducting a fund-raising drive with a goal of $2 million needed to buy and fully restore the building, he said. At present, box office receipts do meet the operating costs, and the theater stays afloat thanks to volunteer help, a goal achieved two years ahead of schedule, he added.

Mesler must know his business. He said he is going to send a bill for about $100 to the city for use of the theater, electricity and stagehands.